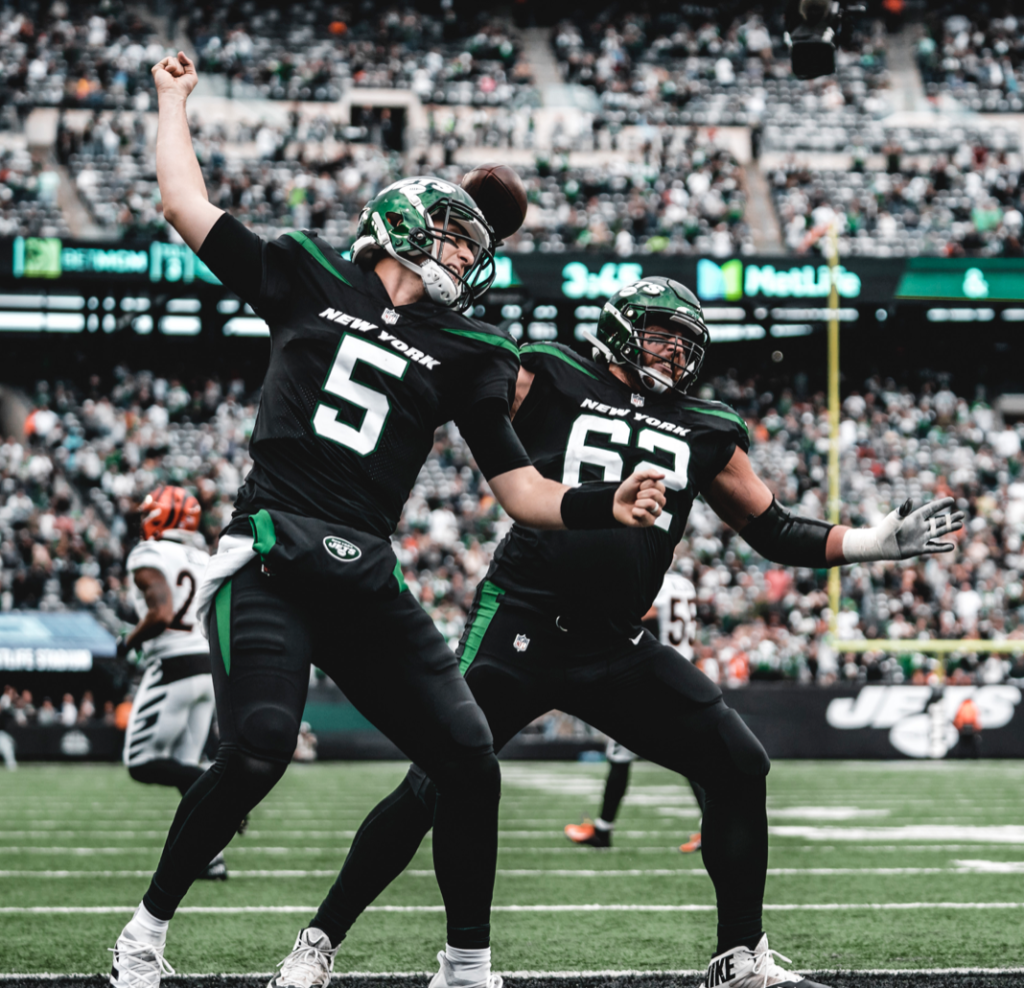 EAST RUTHERFORD, N.J. — What happened Sunday inside MetLife Stadium should serve as a dire warning to these Bengals who think they’re good enough to be considered playoff worthy later in the season.

They were an utter no-show defensively against a quarterback making his first NFL start and thought their franchise quarterback could save them.

In the afterglow of the win in Baltimore and this week, Zac Taylor tried to warn us and his players that these Bengals have earned absolutely no right to be complacent and assume anything.

They said the right things this week but their actions spoke something altogether different. They gave up 405 yards on 37-of-45 passing to Mike White. They allowed 511 yards overall to a Jets team that didn’t have its top three offensive weapons. That’s just disgusting.

“Got out-coached, got out-played today,” coach Zac Taylor said. “They were a hungry team. We knew that they were capable of this, we’d seen it on tape. It was not good enough in any phase – coaching, playing, any of our three phases that we had today and that’s why the Jets got the win. Credit to them, their coaches, their players, they came out hungry and took it to us.”

But how? How did a Jets team that was a solid 11-point underdog want it more than a purported contender in the AFC that just beat Baltimore on the road by 24?

“I thought there was some attention to detail that we’re not used to seeing happen today,” Taylor added. “I can speak offensively, when you’ve got first and goal on the one-yard line and you come away with no points, you lose a bunch of yards on many plays next drive, and then we had a drive down in the red-zone, four-point play, missed opportunity on third down, had to kick a field goal and ended up losing the game by three points.”

The Jessie Bates 66-yard interception return wasn’t 67 yards or the Bengals would’ve had a touchdown and not failed so miserably on first-and-goal from the Jets 1. The Bengals defense forced three turnovers but couldn’t stop a nosebleed in the second half, making Mike White look like Broadway Joe Namath.

“Defensively, the tackling was as bad as it’s been in a long time and I think everybody’s got to be accountable to that,” Taylor said. “And in special teams, we gave up the big return right before the half. That put them in a position to go down there score before halftime and get them some momentum. So, just the things that we’ve been good at, we were not today and that’s all comes down to.”

A stunned Joe Burrow, don’t execute “anyone can beat you.” #Bengals pic.twitter.com/1NhoPyYooO

The obvious question is: Do these Bengals, with Zac Taylor as coach and a talented, young core, have what it takes to mature and grow and handle success?

One terrible loss and now the Bengals are behind the Bills, Ravens, Raiders and Titans in the AFC. Give the Bengals this much, they refused to blame a joke of an “unnecessary roughness” call on Mike Hilton on third down that would’ve given the Bengals and Burrow one more shot. From Taylor on down, the Bengals didn’t earn the right to bitch about the officials Sunday. That, more than anything is a positive takeaway.

“We’ve got to respond, and we’ve got to respond in a way where we’ve got to come through and send a message,” Mixon continued. “And the message is, ‘You’ve got to be strong.’ With the team, we’ve just got to do whatever we can to have ourselves ready for this game coming up because it’s big. No matter what, every game is big, and this one (against Browns) just got bigger. In terms of handling success, we like that. I don’t care what (anybody) says. We like that and we’re going to show that each and every week. But we’ve got to go one week at a time and figure out a way to win. And we’ve got to do that.”

Joe Burrow nearly did rescue the Bengals with no fewer than six clutch throws under duress, including a pair of third-down throws to Tyler Boyd on Cincinnati’s final TD drive that put the Bengals up, 31-20, with over seven minutes left.

Burrow’s touchdown throw to Ja’Marr Chase was a thing of beauty, as was his 54-yarder to Tee Higgins, who broke out with four catches on six targets for 97 yards.

“I think our expectations of ourselves is higher than everybody else’s,” Burrow said. “My expectations were just as high last year as they are this year, of myself and of our team. Losing stings, but we’ll be better for it.”

After an inexcusable 34-31 loss to a Jets team that was coming off a 41-point loss in New England, Mixon, Tyler Boyd and Jessie Bates III took to the podium together to show what they said was solidarity. And to apologize to a fan base that has been burned so many times before.

If you want a silver lining to the dark clouds that literally hung over the Bengals as they departed MetLife Stadium Sunday, look no further than the three amigos that spoke in unison after the Mike White debacle.

Joe Mixon and Jessie Bates tell everyone “we want everyone to know we have each other’s backs.” #Bengals pic.twitter.com/mmBxAfkarZ

“That’s why we came up here together,” Boyd said. “We take full responsibility for how we played. Like Joe (Mixon) said, the message didn’t correlate to what we wanted to go out there and do. I’m not worrying. I know these guys aren’t worrying either. We know what type of team we are.

“Personally, I think we came out flat but I think we turned up after the first quarter, offensively. Again, they played a great game but at the end of the day, we know we’re a better team. We’ve just got to showcase it and execute as much as possible. But going forward, this is a divisional game. We’ve got to take this (result) the best we can. We’ve got to treat this like another playoff game. I believe that we can pull through. It’s just unfortunate that we didn’t rally up from this one going into that one. We’ll be ready.”

They better be because the Browns just lost at home to the Steelers, 15-10. You know the Browns will be looking at next week at Paul Brown Stadium as a chance to right their season, much in the same way last year’s dramatic last-second win propelled them to the AFC Divisional Round.

“To me, the message with the team, we’ve just got to have better messaging,” Captain Mixon said. “We’ve got to take initiative as leaders to no matter what, we’ve got to have our team ready to go. Today, we just wasn’t ready. We came out flat. They wanted it more. And that’s just what it was.

They’ve said the right things in remorse. Now these Bengals need to spend a week looking in the mirror and proving to everyone they deserve the respect they worked so hard to earn just a week ago.