After a crushing loss in Super Bowl LVI, the best healing is looking forward. 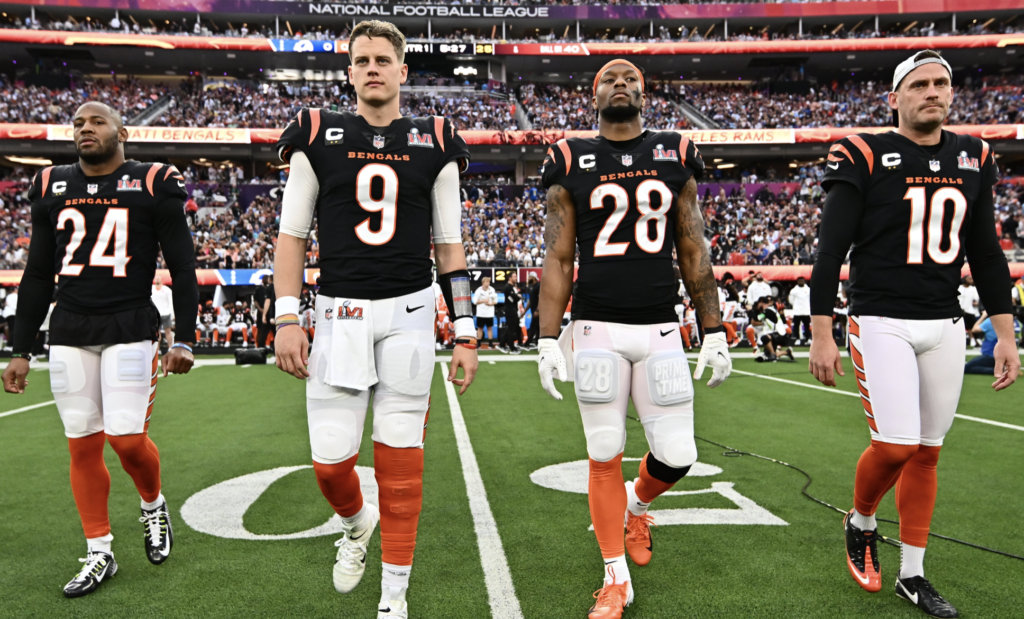 CINCINNATI – Let’s be honest. This past season was nothing less than a smashing success for the men in stripes and staff led by Zac Taylor.

The Bengals won 10 games in the regular season and three incredibly dramatic games in the postseason to get to their third Super Bowl in franchise history, and first in 33 years.

Their quarterback survived (barely) 51 sacks in the regular season and 19 in the postseason to bring the Bengals within 85 seconds of their first Vince Lombardi trophy.

Ja’Marr Chase was football’s best rookie and has nothing short of a sensational future ahead. Tee Higgins and Tyler Boyd will be back to give the Bengals options in the passing game next season.

Joe Mixon, the forgotten 25-year-old running back from Sunday, is still in the prime of his career with three years left on his four-year extension.

But with all those good vibes, the ending of Super Bowl LVI left a horrific aftertaste that’s not going to be washed away anytime soon. It was like a terrible bottle of wine after a spectacular five-course meal. You remember how good the meal was but it’s the taste of that wine you can’t wash out of your mouth.

Wednesday, Zac Taylor was extended through the 2026 season. After a 6-25-1 start in his first two seasons, Taylor was 10-7 this season and 3-0 in the postseason before losing Super Bowl LVI. He spoke for 35 minutes and for the last time before the offseason officially begins in March.

First, Taylor wrapped the season in the wake of the 23-20 loss to the Rams.

Here are five of the biggest takeaways:

“I’m very appreciative of course,” Taylor told me. “This isn’t really about me, this is about all of the people in this building who are working towards a really solid future for all of us. And so I’m excited for everybody. I certainly feel like the future is bright. There’s a lot to build on. There’s a lot of people who were a big part of this season. Some will get the praise and some won’t because they are behind the scenes. There are just a lot of people who I want to thank, it starts with the players and the coaches for everything they did this year, all the hard work that went into this. A lot of tremendous moments that we’ll have a chance to look back on and be appreciate of.

“Joe had the sprained MCL, a reaggravation of something he did back in December,” Taylor said. “He’s a tough guy, played through it. That part is encouraging. He’s getting some much-needed rest in the next couple weeks, and we expect him to come back way healthy. C.J. (Uzomah) will have an MRI today but everything so far has been encouraging. That’s typically a 4-to-8-week injury that he came back and played through in two weeks. That speaks to his toughness, his character and willingness to do what it takes to get the job done for our team. Hopefully with some rest he’ll be back to normal as well. Other than that, nothing major. Of course, cleanup things that will happen with some players. For the most part everyone is on pace to be back for next season.

“We were in 2-minute mode and Samaje has done a great job,” Taylor said. “His role has really been as a protecting back and a lot of the things that come with that, off of that. It’s one of those situations where I called the play a little later on the clock. And so, I was the one that said leave him in there. Justin Hill, our running backs coach, asked if we wanted to make a change. I said, just leave Samaje in there. Obviously, it didn’t work out for us. Whether Joe is in there or not, he’s certainly deserving of the opportunity in a key moment in a key game to try to get it for us as our featured back. But again, that’s just one of the decisions you make in the moment and you’ve gotta move forward with it. There’s other things I certainly could have done over the course of the game that would have put us in a better position. Unfortunately, we couldn’t get it done.”

“I think that we’ll just look to improve the team any way that we can and not specific to one necessary group,” Taylor insisted. “The offensive line helped us get to the Super Bowl. They gave us opportunities to go win the Super Bowl. Everything always falls on them statistically, but that’s not always the case. There are play calls that could be better to help put them in a better position. There is a lot that plays into all that. They were an offensive line that helped us get to the Super Bowl and gave us opportunities to win and I think they should be commended for that.

But those 70 sacks?
“We just have to be better as a unit,” Taylor responded.

“Certainly, Duke (Tobin) and his staff have gotten things moving behind the scenes,” Taylor said. “They’ve gone to all those All-Star games and already had a lot of meetings. Some I would have been a part of last year, really just taking notes and hearing the information the scouts have. That doesn’t change. There will be catching up we have to do as coaches obviously, but Duke and those guys have not missed a beat. The combine is the first thing coming up. The beauty of how things are now with the combine is we have access to these Zooms, it really changes the way the coaches can get information from the players from an Xs and Os standpoint. There’s not the pressure of you only get the combine and get maybe one visit from a player. You can have all these zooms and get all the information over the next 60 days. That allows us to really gear up and play catch up with the combine guys but also gear up for free agency, ours and others to make sure we’re making great decisions and all on the same page.”

The Bengals have over $57 million in cap space to use in free agency, which begins March 16 at 4 p.m. ET.

Teams can begin speaking with free agents two days before free agency begins during the legal tampering period. Beginning on Monday, March 14, 2022, at 12 p.m. ET, clubs can contact and negotiate with players who will become unrestricted free agents two days later. Players and teams can agree to deals, but they can’t be signed until the new league year begins.

The NFL Combine begins March 1 in Indianapolis. The NFL Draft is April 28-30 in Paradise, Nevada.

Through the draft and free agency, this is a non-negotiable this offseason. Quinton Spain, Trey Hopkins and Hakeem Adeniji were the focus of much scrutiny, brought on by the 19 postseason sacks in four playoff games. That’s an average just below five per game. Tampa Bay center Ryan Jensen and Washington guard Brandon Scherff would be at the top of the list The team is very happy with Jonah Williams at left tackle and comfortable with Isaiah Prince at right tackle. Riley Reiff is likely done at right tackle at the age of 34.

Yep, they could franchise tag the defensive team captain next season. But it makes a lot more sense to get a long-term deal done for a player who revealed his true value throughout the postseason. Big plays and great leadership in the playoffs. Harrison Smith signed a four-year, $64 million deal last summer and the Bengals appeared close to re-signing Bates. Then Bates hired David Mulugheta of Athletes First. Bates struggled, to his own admission, to start the season. But later in the season, the glue to the secondary was just that for the Bengals. Do the Bengals think the 25-year-old Bates is critical to their future? There’s little doubt they do. It’s a matter of convincing Bates that he’s appreciated and perhaps going above the $16 million annual average.

Trae Waynes is as good as gone. If he is cut before June 1, the Bengals save $10.8 million. Tre Flowers came into the game when Chido Awuzie came out briefly with an injury. Flowers and Eli Apple are free agents. Mike Hilton is back and proved his value throughout the season as one of the most valuable and versatile defensive backs in the game. He was the highest rated Bengal DB by PFF and one of the best in coverage after the bye week.

The 27-year-old interior defensive lineman was a force with D.J. Reader. Ogunjobi and D.J. Reader make a powerful combination over the nose. Ogunjobi injured his foot in the playoff win over the Raiders.

This seems like an odd one on the surface. The running back is one of the best all-around backs in the NFL. At times, the Bengals appeared to forget about him in the most critical situations, like the end of the Super Bowl. He caught five passes (good) on six targets (good) for one yard (inexcusable). He had only 15 carries in the biggest game of the season. Mixon’s year was far from disappointing. He was right at his career average of 4.1 yards per carry. He had career highs in carries (292), yards (1,205) and touchdowns (13), receptions (42) and receiving yards (314).

If the Bengals are to get back to the Super Bowl and finish the job on Feb. 12, 2023, in Glendale, Arizona, the Bengals need to make sure they learn from the mistakes of last Sunday and move forward with an aggressive plan in free agency and the draft that sends an unmistakable message.