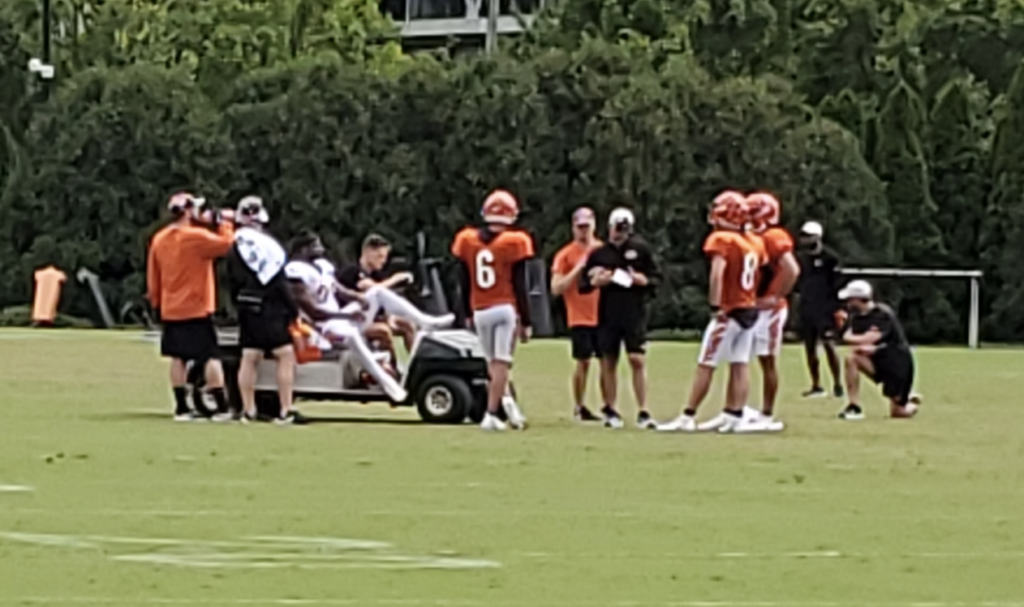 CINCINNATI – As we move into the third week of training camp and this Friday’s preseason opener against Arizona at Paul Brown Stadium, the Bengals have several areas of focus to address. The Bengals will practice Sunday and Monday and again on Wednesday before a walkthrough on Thursday and kicking off the preseason against the Cardinals.

The Bengals can only monitor his progress from his appendectomy on July 26. While he works on getting his strength and weight back to playing shape, there’s no need to rush him back to physical activity until he’s completely healed and ready to take snaps. He’s been at camp on a golf cart, watching Brandon Allen, Jake Browning and Drew Plitt run the offense. Burrow is almost certainly out for the first two preseason games and at this point, there’s really no reason for him to see and game snaps until Sept. 11 vs. Pittsburgh, assuming he can get back on the practice field for the two joint practices against the Rams on Aug. 24 and 25.

Taylor said he’s not concerned about Burrow needing to call plays in practice.

“I don’t think that’s necessary for him,” Taylor said. “I think he’s been locked in and focused. He’s in the meetings and helping lead like he was (Friday). He’s been plenty engaged and I don’t think we need to stimulate him. He does a great job there.

“Just to take it day by day based on how he feels. He’ll progress. I hate to put a timeline on it.”

Again, there doesn’t seem to be urgency surrounding his back issue that landed him on the non-football injury list in July. Like Burrow, he’s been at practice, observing and chatting up teammates. As long as he’s ready for Sept. 11, there’s not any reason for him to be exposed in the preseason. But like Burrow, there would be some benefit for him to see live practice snaps, perhaps against the Rams, or just against the Bengals impressive defensive front.

If there’s someone on the offensive line that needs the preseason, it’s Carman. The second-year left guard has appeared to make some progress but still needs to work on balance and technique, something he’s worked on with Frank Pollack and, on Thursday and Friday, with Bengals O-line coaching legend Jim McNally. Timing is something else Carman needs work on. If his balance is off, he can be prone to false starts, which was an epidemic along the line on Thursday before improving on Friday.

On the defensive side, Ossai is someone who needs the preseason as much as Carman. Defensive coordinator Lou Anarumo said Thursday he is treating the 2021 third-round pick like a rookie as he battles to win a prominent role as an edge behind Sam Hubbard and All-Pro Trey Hendrickson. Ossai hasn’t played in a game snap since last year’s preseason opener at Tampa Bay, when he suffered both a right wrist injury and a torn knee meniscus. Ossai has looked explosive at times in his second-team reps and appears ready to win a spot.

The Bengals lost tight end Drew Sample for at least two weeks with a sprained MCL in his left knee when he was rolled up on during the first day of full pads practice on Tuesday. The team dodged a bullet there but suffered another blow on Friday when second-year tackle D’Ante Smith left early on a cart with an apparent right leg injury. Eli Apple and Tre Flowers had very minor issues on Monday but were back on the field later in the week in full pads.

It’s been quite the week for the defense, as safety Michael Thomas collected a pair of picks during 11-on-11s and Vonn Bell was flying all over the field, including one interception. Rookie Dax Hill appears to be justifying the coaching staff’s appointment of him to the first-team as the heir apparent to Jessie Bates, as the veteran free safety remains absent from camp and has not signed his $12.9 million franchise tag to play the 2022 season. Keep a close eye on rookie Cam Taylor-Britt. He made a sensational pass breakup late in practice Friday in good coverage and will certainly get plenty of time in preseason. He had an uneven day on Tuesday but in the two days since has looked measurably better and more comfortable. Another rookie to keep a close eye on is strong safety Tycen Anderson out of Toledo. He’s going to get plenty of reps as he builds his case as depth behind Bell. The defense was flying around the ball from the very first preseason game last season. This defense is deeper and younger and potentially faster.

We’ve pointed out the obvious about Jackson Carman. But with the injury to D’Ante Smith, the tackle position becomes a bit uncertain as Collins works his way back. Isaiah Prince is the presumptive starter at right tackle on the first unit, with Alex Cappa at right guard increasing his reps every day. Ted Karras has been as advertised at center. Carman is the left guard, with rookie Cordell Volson possibly pushing him at that spot but for now it’s Carman. Left tackle Jonah Williams has looked solid so far, as one would expect for the first-round pick from 2019. Devin Cochran has been getting plenty of reps on the second and third team units at left tackle. This preseason will be huge for the rookie free agent out of Georgia Tech. The consistency is the biggest issue, with the offensive line struggling at times with timing and false starts. Some of that could be Joe Burrow missing and some could just be the rust of a new unit getting to know each other.

“I think all those guys need to continue to grow there,” Taylor said. “That’s the beauty of training camp. We’ve only been, this will be our third day in pads, and so for those guys, you know, there’s a long ways to go to evaluate these guys. And they need to keep making improvement every single day. I mean, everybody watched yesterday, it wasn’t good enough in any area on offense (Thursday), for sure. So we’ll continue to give those guys reps and see where the growth comes from.”

Darrin Simmons said early on that he’d need camp and the preseason to come up with definitive answers on the 66 players that will compose his special teams units. The punting competition has been pretty even between 14-year veteran Kevin Huber and second-year punter Drue Chrisman out of Ohio Stadium. Barring injury, hard to imagine Cal Adomitis beating out Clark Harris as the long snapper. The return game is where it gets interesting. Do the Bengals keep Trent Taylor over the potentially more explosive Kwamie Lassiter II in the punt return game. Fresh in the mind of Simmons is what happened with Darius Phillips in the 49ers game last year, when Phillips lost two fumbled punts. Pooka Williams and Trenton Williams are also getting looks in the punt return game. Then there’s the kickoff return game. Chris Evans would appear to have this in hand but others will get a look. Evan McPherson, of the 65-yard boot last Saturday, has looked as good, if not better, than where he left off in the postseason.