Team geared up and ready for 'Back Together' Saturday practice inside Paul Brown Stadium. 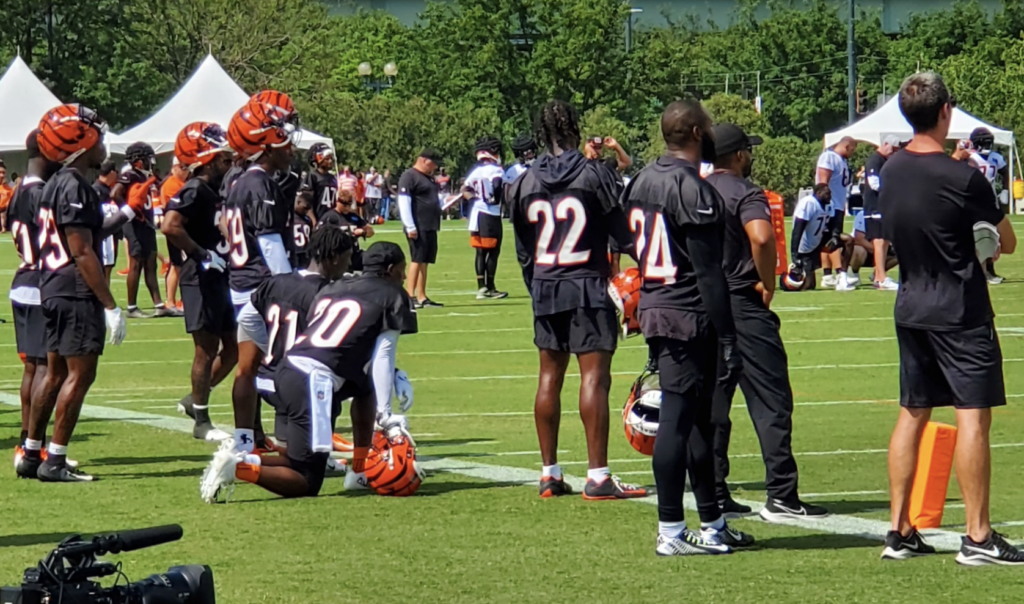 CINCINNATI — The heat let up a bit on Friday as the Bengals held Day 3 of training camp on the Kettering Health practice fields.

Some of the quick highlights:

The new tight end made a pair of nice grabs in 11-on-11s and red zone drills, including one from Brandon Allen in the red zone where he shed coverage and made an outstretched grab before running inside the pylon for the score.

Of all the new faces, Hurst has been the most prominent as he shows off the burst of speed he promised when he signed his one-year, $3.5 million “prove-it” deal in March.

Another player that continues to open eyes and continue his momentum from the spring is wide receiver Stanley Morgan. He caught a drag route that had him cross in front of Eli Apple and behind Dax Hill. He dove to the turf on the far side and his offensive teammates such as Joe Mixon and Tyler Boyd celebrated it as a score while the defense and coaching staff waved it off. There was no doubt about another catch, as he ran an in-slant in red zone and just beat Eli Apple for the 10-yard score.

This has been a rather intense battle before the pads even go on next week. Apple is clearly trying to rise the level of the most explosive receiver on the roster. The two tangled in the back corner of the end zone as Apple knocked away the Allen pass. The two have been pushing and shoving and Apple has risen to the occasion physically, clearly want to show everyone that he is ready to compete.

He may not have been around for spring and OTA practices, but edge Trey Hendrickson looks to be ready to pick up where he left off last season. He had two rushes against the Bengals offensive line Friday that would’ve resulted in sacks and has looked crisp and powerful in drills. Hendrickson is one to watch once the pads go on next week.

Bengals receiver Mike Thomas, another member of the depth unit behind the three amigos made a nice catch down the left sideline in front of Mike Hilton. Attempting to avoid contact, Thomas appeared to tweak his left ankle and left practice to tend to his foot and work on flexibility. He remained with the team for the rest of practice but appeared limited.

Another injury occurred late in practice when rookie seventh-round edge Jeff Gunter went down grabbing his left leg. He remained on the ground for several minutes. No cart was needed but he was slow to get up and leave practice.

While the team waits on La’el Collins and Alex Cappa to step into their starting roles at right tackle and right guard, respectively, it’s a very important time for those fighting for backup roles behind them. Isaiah Prince and Hakeem Adeniji continue to get first-team reps, with D’Ante Smith and rookie Cordell Volson spelling them occasionally on the first unit with Ted Karras, Jackson Carman and Jonah Williams. After tweaking his left leg on Thursday, Devin Cochran returned to practice Friday and took his normal reps.

Frank Pollock says La'el Collins getting his work in in the classroom not worried about the back at this point #RuleTheJungle pic.twitter.com/iSTUf4zPx9

Saturday is “Back Together” Saturday around the NFL as teams welcome fans into their stadiums and training camp facilities for the first Saturday of training camp season. Bengals fans are expected to fill the lower bowl of Paul Brown Stadium and watch the team work out on the stadium field for the first time. Practice begins at the usual time of 2:15, with practice expected to last for two hours. Fans have turned out in force for the first three days on the Kettering Health fields, with players obliging generously for photo opps, Instagram posts and autographs.