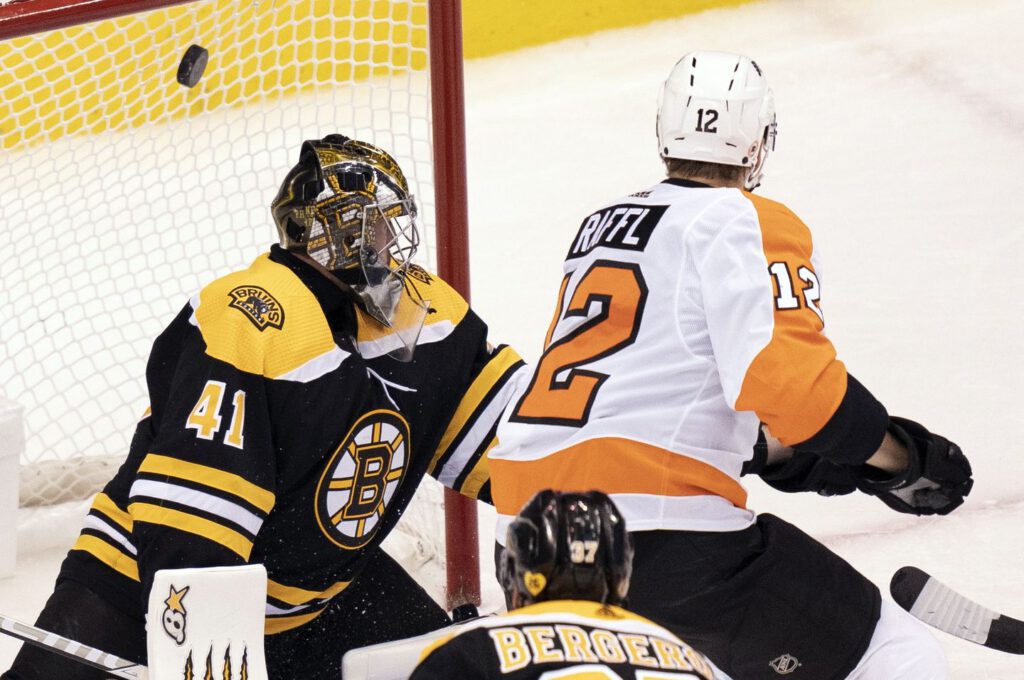 Shutting down the Bruins prized possession of Brad Marchand, Patrice Bergeron and David Pastrnak all on one line has never been an easy task for any NHL team. It requires a perfect blend of strategy, talent and urgency — all must be on the highest levels to find success against them.

If there’s any trio in the NHL that fits that description it’s the Flyers first line of Jakub Voracek, Sean Couturier and Claude Giroux. On Sunday, Philadelphia’s big three neutralized Boston’s big three to beat the Bruins 4-1.

It sent a ripple effect through the Bruins lineup, as offensive troubles were abound and puck possession issues were infectious through the team.

“We need to make a better friggin’ play with the puck, is what I’m thinking in some of those situations that we’re capable of doing,” Bruce Cassidy said when asked what corrections his team needed to make. “That’s what needed to be done tonight and we probably would be out of trouble here. Probably a 1-1 game it looked like towards the end.”

It began with the play of the Bergeron line, which NBC incessantly labeled “the Perfection Line”.

They skated most of their shifts against the Couturier trio and finished with a Corsi for percentage of 38.46 and zero high-danger scoring chances at 5-on-5. Other than their first couple of shifts in the first period, they seemed to constantly struggle to maintain any consistent and sustained attack in the offensive zone.

The Flyers highest Corsi for percentage for a line was 76.19. The line: Voracek, Couturier and Giroux.

It’s an understandable result given that the Bruins have only been back for two games — the rust wasn’t all just going to come off after the exhibition against the Blue Jackets. But the plays with the puck were still extremely uncharacteristic of Boston’s first line.

“I think they should keep it simple until they find their game and that’s kind of the message is I know you’re creative,” Cassidy said of the first line. “You’re one of the best lines in the National Hockey League for a reason. I can’t sit there and tell them they have to make this play in this situation.”

Ironically enough, the Bergeron line’s issues that resulted in Philadelphia goals actually came with different matchups on the ice.

On Michael Raffl’s goal, Torey Krug and Jeremy Lauzon were caught puck-watching. But Travis Sanheim was allowed to keep the puck in and carry it to the tops of the circles because Pastrnak and Marchand were caught behind him. This all came after Bergeron shoveled it to the middle of the ice and it was picked off.

The process of the second goal began when Charlie Coyle poked the puck in the direction of Marchand who skated past it, looked back and kept skating to the bench.

Five minutes into the third period, with the Bruins a goal away from pulling to within one, the Bergeron line was in the offensive zone when Pastrnak threw it up top to Brandon Carlo. The pass certainly could’ve been better, but Carlo fumbled it and the Flyers took it the other way and sniped one past Jaroslav Halak.

It’s hard to put the last one on the Bergeron line. It is not when it comes to the first two goals. All came off of cavalier plays with the puck.

“I’d just like to see the whole team have a shot mentality,” Cassidy said. “[The first line] weren’t the only ones. Torey [Krug] turned down a one-timer from the slot in the second period, Charlie McAvoy again. Jack [Studnicka] had a 3-on-2 from the slot, chose to pass. Then Krejci chose to pass from there. Listen, it wasn’t just our top line. I think it was a bit of a team-wide problem and I saw a bit of it against Columbus and I think we’ll probably see a little more Wednesday, but we got to get it out of our system quickly where when we get a good look at the net, we take a shot.”

Even though the Bruins finished with 35 shots, Cassidy was right. The most shots passed up came on the power play, which finished 0-for-3.

The most obvious example of this came with nine minutes to go in the third period and the Bruins already down 4-1.

Krug had the puck at the top of the zone and slid it over to Pastrnak who had a wide — and I mean wide — open one-timer. Instead of buzzing one towards Carter Hart, he opted to pass it though an open seam to Marchand who also appeared surprised No. 88 passed up on the shot. Marchand missed the pass and the puck went back up the boards.

“I think just maybe change our mentality a little bit,” Krug said after the game of the power play. “Try to get away from those pretty plays. We make one pass, we put it on net, we recover the puck and now those seams and those pretty plays will be there.”

Through two games, the Bruins have been outscored 8-2. The goal-scoring has been tough to come by and the rust is everywhere. This doesn’t look like the same team that left the ice in March.

It’s logical to put that on the team not playing a game in over four months and now suddenly being thrust into the playoffs. Every team will react differently to this — it’s not as simple as “Hey, guys! Let’s play harder!” or “Hey, guys! Let’s score some goals!”. This will take some time.

The real question is when? When does the offense start putting more pucks in the back of the net? When does the Bergeron line play to its capabilities? When does the team revert to it’s Presidents’ Trophy winning ways? It will take time to regain form and the road doesn’t get any easier with the Lightning up next, the Capitals after that and then the first round.

The clock is ticking.