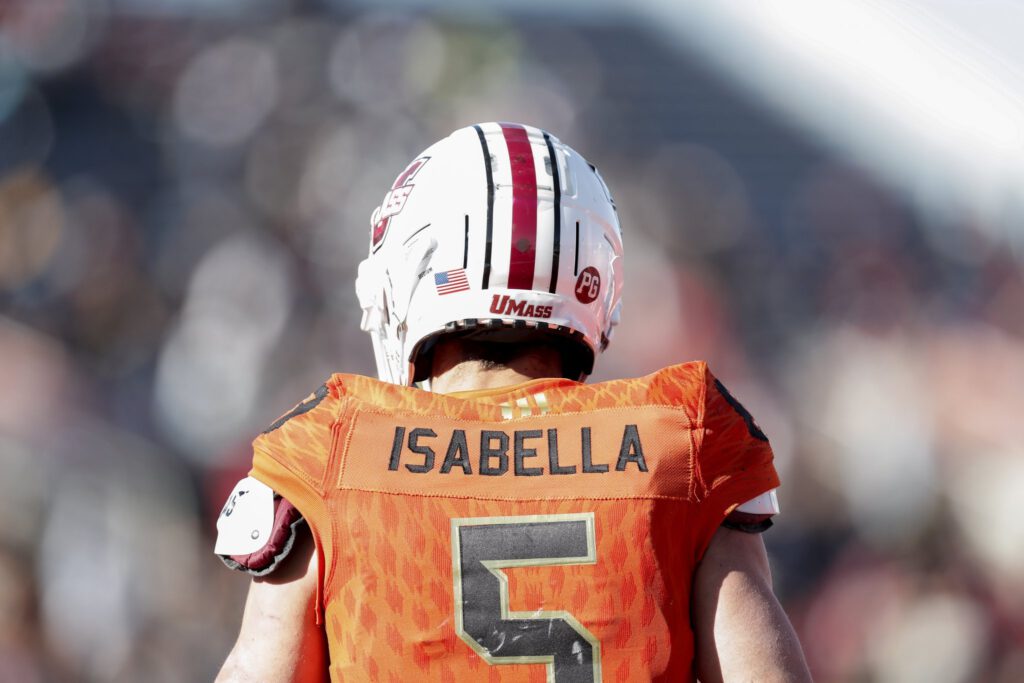 This is part five of a position-by-position series previewing the best Patriots fits in the 2019 NFL Draft.

Over the last two decades, the Patriots are the most successful team in the NFL at grooming slot wide receivers.

Since 2006, as far as the data will allow us to go back, no team in the NFL has more receiving yards from the slot than New England.

Now, we can get into the semantics of specific roles, but the Patriots seamlessly transitioned from Troy Brown to Deion Branch to Wes Welker to Danny Amendola and Julian Edelman.

But their interest in those players, as well as Julian Edelman’s age (32), suggest that they could look to add a slot option in the draft to compete with last year’s sixth-round pick, Braxton Berrios.

Here are the best fits for the Patriots at slot wide receiver in this year’s draft:

And here we go. Isabella solidified himself as a top 50 prospect with a blazing 4.31-second 40-yard dash at the combine further establishing the fact that he’s a true deep threat at the next level. Isabella isn’t your typical Patriots slot receiver; he’s not the technician at the top of the route that we are used to, but he led the nation in yards per route run (4.15) and was second in deep passing yards (705). The entire UMass offense ran through Isabella, and every defense he faced knew it, yet he still tore up the competition every week including 219 yards and two touchdowns against Georgia as a senior. Isabella will need to work on his setup at the top of routes to win in his breaks, and his short arms lead to body catching, but his production and speed are elite for a wide receiver prospect.

Campbell is another burner from the slot, but he’s not a deep threat, and only caught two passes of 20 or more yards last season. Instead, Campbell’s elite athleticism (99th percentile) and elusiveness in the open field translate on a horizontal plane on reverses, screens, underneath crossers and spot routes. The Ohio State product doesn’t run refined routes against man coverage, but he has a good feel for finding soft spots over the middle against zone coverage and is a game-breaking threat every time he touches the ball. Campbell translated those skills into 90 catches and 12 touchdowns for the Buckeyes last season, which is very impressive given his shortcomings as a route runner. Campbell also adds value as a returner in the Cordarrelle Patterson and Percy Harvin mold, but his college production was better than both of those players.

And here we go, part two. It feels like we’ve been discussing Hunter Renfrow as a Patriots target for years, and that’s because he was a four-year contributor at Clemson. Renfrow is the prototypical Patriots slot receiver. He’s incredible out of his breaks creating instant separation with a great setup, snappy hips and quick feet that translated into a 6.8-second three-cone time (75th percentile). He regularly steps on the toes of the defender and cuts horizontally snapping routes off in either direction and will be a chain mover on third down. He’s also extremely slippery after the catch with great vision in the open field and has glue-hands with hardly any drops on his tape. Renfrow is a below-average athlete for the position and didn’t produce in college like some of these other receivers, but you know exactly what you’re going to get with him at the next level.

Harry was one of the toughest evaluations in this class. He’s a unique player, a big-bodied (6-2, 228 pounds) slot receiver that ran a limited route tree at Arizona State. Most of his production came on screens, hitches or curls and vertical routes and he struggled to create downfield separation and beat press coverage. He needs to rework releases against press coverage, often making his moves too early, and fails to close down the space between him and the defender. For those reasons, I’m lower on Harry than some who have him in their top five or even as the best receiver in the class. On a positive note, Harry had back-to-back 1,000-yard seasons for the Sun Devils and is a darling of the analytics crew ranking in the 89th percentile of market share (percentage of teams yards and touchdowns). He’s incredible with the ball in his hands creating after the catch and is strong to win contested catch battles downfield, a rare combination. Harry is an explosive receiver that moves well for his size, and his combine workout backed that up. With a more complex route tree, he could thrive at the next level.

Another receiver that others will be higher on than me. Brown is a smooth and refined route runner that creates separation with attention to detail and by varying speeds throughout his stem. He’s also very elusive after the catch and does an excellent job of finding soft spots in zone coverages. Here’s my thing about Brown, a lot of his production in college came in situations where he out-ran coverage into space in a straight line, but he’s not a true burner (4.49s 40-yard dash). Brown showed just average change of direction skills in his route breaks, and you question how many routes he has in his arsenal. Brown fits as a slot receiver in New England, and I’m prepared to be wrong about him, but other receivers impressed me more on tape.

Hardman did a little bit of everything for the Bulldogs as a slot receiver, returner, wildcat quarterback, gunner on the punt team and part-time defensive back. His versatility and motor fit the Patriots to a tee, and he’ll come off the board later on in the draft than similar players like Parris Campbell. As a receiver, Hardman’s speed (4.33-second 40-yard dash) and explosiveness make him a legitimate deep threat, and his ability to turn the corner as a ball carrier will challenge defenses every week. As you’d expect with that athletic profile, Hardman was also a threat on reverses and other gadget-type plays that added another element to the Georgia offense. If you can catch him, Hardman is on the smaller side, which led to some struggles against press coverage and aggressive defenders, but if you scheme him into space, he’ll take it to the house.