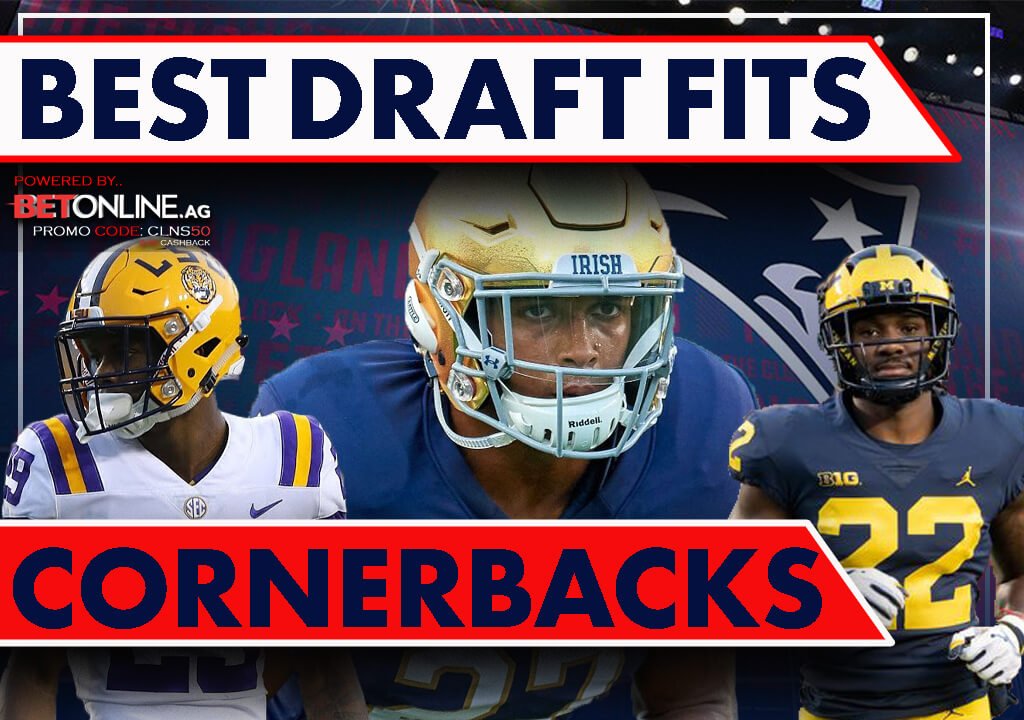 This is part ten of a position-by-position series previewing the best Patriots fits in the 2019 NFL Draft.

The Patriots have arguably the best cornerback group in the entire NFL.

Although it’s not a position of need, the Patriots and Bill Belichick always add secondary pieces in the draft or undrafted free agency; you can never have too many bodies at such an important position.

And the Patriots have a clear set of criteria that they stick to, especially when investing a large amount of money or draft capital in a cornerback.

Cornerbacks for New England typically are around six-feet tall, 185 pounds, ran a sub-4.5 in the 40-yard dash, performed well in the three-cone drill, have man coverage skills, ball skills and are willing tacklers.

The Patriots will sacrifice height to find the other tools later on in the draft, but the other traits are typically deal-breakers for Bill Belichick.

With that in mind, here are the best fits at the cornerback position for New England in the 2019 NFL Draft:

Williams was the only cornerback that received a first-round grade in my system this year, and if he’s somehow there at the end of the first round, he checks every box. At nearly six-foot-two and 185 pounds, Williams ran the 40-yard dash in 4.37 seconds at the combine. Along with ideal size and athleticism, he’s remarkably calm and instinctive in the early phases of coverage, seldom falling for crafty route releases or double moves. The LSU product has terrific mirroring skills thanks to sound footwork and anticipation to match receivers down the field. He also is very smooth in his transitions with loose hips that can flip in any direction, has above-average ball skills and shows the ability to play in zone coverage as well. The only knock on Williams’ game is that, at times, he was passive as a tackler and in run support and didn’t always play with maximum effort in those aspects of the game. However, the right coach, maybe Bill Belichick, should be able to get that effort out of him. In his movements and build, Williams reminds me a lot of a young Stephon Gilmore. Both have this innate ability to open their hips to change directions while not losing any ground to the receiver; Gumby-like flexibility.

If you want to place a bet on any of these prospects playing for the Patriots next season, Michigan’s David Long is your guy. He’s on the shorter side for the position, but he checks every other box for the Patriots with an outstanding athletic profile (94th percentile) and the best three-cone time of any player the combine this year (6.45, 97th percentile). Long also Long specializes as a physical press-man corner with strappy man coverage skills that are reminiscent of Malcolm Butler and JC Jackson. He loves to sit in the receivers’ lap at the line of scrimmage and sticks to his man throughout the play. He has tremendous patience, long speed to carry vertical routes and is rarely out of position. Long is a competitor that takes every down personally, and on just 31 targets last season, he only allowed nine catches. His height and arm length might force him into the slot, but for me, he projects as a perfect shadow for Z receivers that move around the formation.

A finalist for the Thorpe Award and an AP first-team All-American in 2018, Love is arguably the most NFL ready cornerback in this class. The Notre Dame product is highly instinctive in coverage, which led to 32 pass breakups and four interceptions over the last two seasons with the Irish. He’s nearly flawless in his fundamentals for a draft prospect with tremendous footwork and hip fluidity to mirror receivers. He’s always under control and never panics, which allows him to stay in-phase the majority of the time. Love might be most comfortable from off-coverage, though, where his read and react skills enable him to challenge receivers at the catch point. Although he’s a technician, Love’s ceiling might be a high-end number two corner, which isn’t necessarily a bad thing. The one question mark he does have is a lack of acceleration and long speed to win footraces at the next level, and he didn’t do himself any favors in that regard with a below-average 40 time (4.54 seconds). In many ways, Love reminds me of former Patriots cornerback Logan Ryan. Teams might need to rotate a safety over the top of Love to protect against the long ball, and he might give up some plays in front of him, but his football IQ and technique will help him compete on every down.

In every sense of the word, Houston’s Isaiah Johnson is a project. He’s an elite athlete that tested in the 98th percentile at the combine, and at six-foot-two, still posted a 6.81-second time in the three-cone (68th percentile). Johnson only has two years of experience at cornerback after making the switch from wide receiver and is far from a finished product. Along with his athletic profile, he was very quick to match route breaks and recover when out of position thanks to smooth transitions. As a former wideout, he also has above-average ball skills and taps into that experience to read route combinations. Johnson also showed a willingness in run support and adds special teams versatility as a terrific gunner on punt coverage. However, his technique needs a lot of work, mainly with his jams in press coverage and impatience at the line of scrimmage. Johnson’s accuracy with his punches is inconsistent, and he often fires the wrong hand based on his leverage. He also opens his hips too early and gets himself out of position with frantic footwork forcing him to play from out of phase too often. Johnson might be the most physically gifted corner in this class, but his pro team will have to be patient with him as he learns the position. His upside is a more athletic version of Brandon Browner.

Webster is a perfect example of how lousy fortune can stunt a players growth, and Belichick loves to acquire top recruits that failed to live up to expectations in college to see if he can get that talent out of them. Webster got off to a fast start at Ole Miss, but a knee injury ended his 2016 season, and he was never the same player after that. However, Webster went to Indianapolis and posted the highest SPARQ score of any cornerback at the combine with tremendous speed and explosiveness scores and passed the Patriots’ three-cone test. On the field, Webster is a physical corner that seldom gives up the “red line” along the sideline and loves to redirect receivers from both man and zone coverages. He’s got heavy hands, and he’s not afraid to use them in coverage or as a run defender where he’s an above-average player as well. Along with the injury, he can be impatient in press coverage, and his spacing and field awareness in zone coverage needs work. He often fails to pass off receivers in zone and gets caught in no-mans land. Webster is a late-round flyer on athletic upside.

The Washburn University Ichabods out of Topeka, Kansas have a legitimate NFL cornerback prospect, and he just so happens to be a fit for the Patriots. Corey Ballentine is a rapidly ascending prospect that tested in the 96th percentile and was terrific at the Senior Bowl. Ballentine is a physical corner that’s a factor in run support. He’s got excellent ball skills and works quickly at the line of scrimmage with his hands and feet in coverage. The Washburn product has above-average length which helps him with his press technique and allows him to challenge receivers at the catch point, and his speed allows him to be patient at the line of scrimmage. He’s also a special teams ace with experience in every phase of the kicking game. Ballentine is athletic enough to play in the NFL, but he’ll have to make the jump from Division II ball to the pros, which will require some patience from his new team.