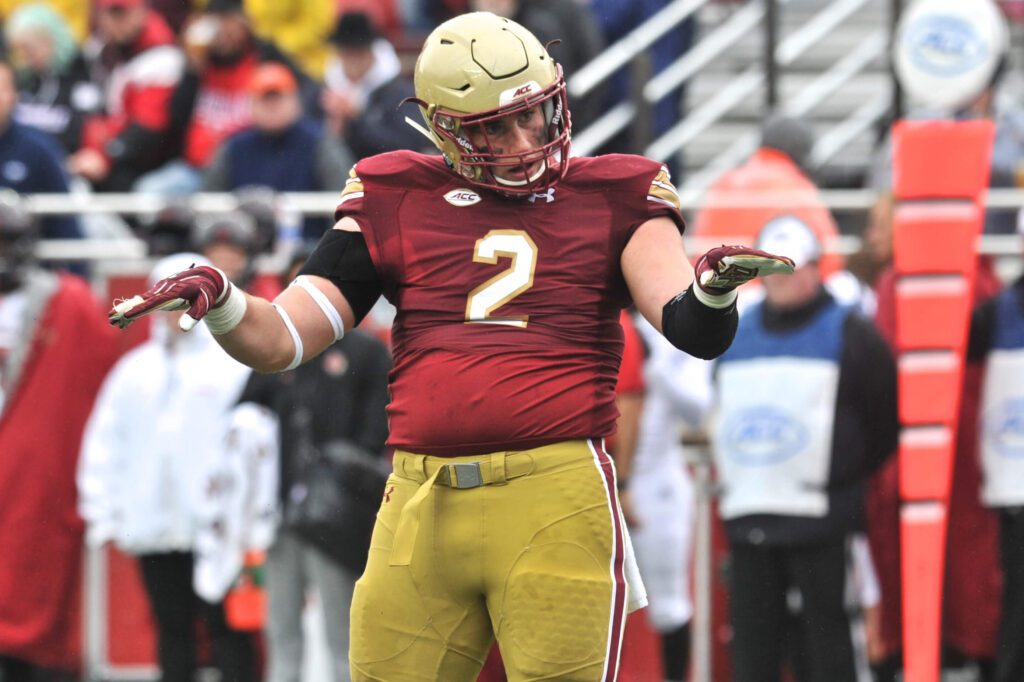 This is part nine of a position-by-position series previewing the best Patriots fits in the 2019 NFL Draft.

Finding edge defenders that fit the Patriots prototype can be a tricky endeavor depending on the draft class.

Nowadays, most teams will sacrifice weight and play strength for explosiveness; it’s a passing league they say, and rushing the passer is the golden ticket.

However, the Patriots still emphasize things like setting a hard edge against the run and collapsing the pocket rather than turning the corner to get to the quarterback.

In this year’s class, there’s such a diverse and talented group of edge defenders that there are some intriguing prospects that fit New England’s mold.

With the departure of Trey Flowers, the Pats are also in the market for a big-ticket edge defender that can be a two-way force like Flowers down the road.

Here are the best fits for the Patriots among the edge defenders in April’s draft:

Ferrell is ninth overall on my board as one of the best prospects in this year’s draft. Some have soured on Ferrell, who was a consensus top 15 pick before last season, due to some stiffness in his movements particularly in his ability to turn the corner. However, after 11.5 sacks last season, Ferrell finished his career at Clemson with 27.0 career sacks and 50.5 tackles for loss. He’s one of the smartest edge rushers in this class with terrific instincts to read blocking schemes and devise a rush plan based on how tackles play him. Ferrell also displays elite hand usage and technique with a wide variety of pass rush moves that convert a quick first step into power moves. For the Patriots, setting a hard edge in the running game is a must, and Ferrell is one of the best in this class at that and shows immense power at the point of attack against the run. Ferrell won’t “wow” you with explosiveness or short-area quickness, but he’s as close to a sure thing as there is in the draft.

As we get closer to draft weekend, Allen’s stock amongst draft pundits continues to rise. The BC product could’ve made my list as an interior defender as well, and his versatility is something that teams will covet. Allen fits in best as a chess piece that you can move around depending on the situation, which makes him a perfect fit for Bill Belichick’s defense. Furthermore, he has arguably the largest toolbox in this class with just about every pass rush move in his arsenal. His technique across the board, including hand usage and playing with proper leverage and pad level, is tremendous, and he plays hard on every single play. Another bonus of Allen’s game is his play recognition skills against the run, and an innate ability to knock passes down at the line of scrimmage. Allen is an average NFL athlete and struggled to turn the corner with tightness in his lower body, but he’ll be a long-time contributor as long as he stays on the field.

For the life of me, I can’t figure out why the draft world isn’t higher on Iowa’s Anthony Nelson. Some draftniks have him outside of their top 100, which is odd. From a Pats perspective, Nelson’s athletic profile looks a lot like former Patriots defensive end Chandler Jones. He’s 6-7, 271 pounds with freakishly long arms and tested in the 79th percentile at the combine. To add fuel to the fire, Nelson also tested in the 92nd percentile in the three-cone clocking in at 6.95 seconds. On the tape, Nelson uses his long arms and heavy hands to control engagements in the running game, and his short-area quickness also allows him to slither around blocks on the interior. As a pass rusher, Nelson loves to use a one-two punch of a long arm and arm over move and will use his grip strength to counter snatch blockers as well. He can play from multiple alignments, and his only real weakness is some limited ankle bend to turn the corner. As an in-line defensive end, Nelson is a prototypical fit for the Patriots.

Let’s get this out of the way: Chase Winovich is much more than a try-hard white guy. Yes, his work ethic and motor are off the charts, but he’s also a terrific athlete that’s technically sound. Winovich tested in the 72nd percentile at the combine and ran in the 90th percentile in the three-cone (6.94 seconds), and he plays even faster than that. Along with movement skills, the Michigan product has some of the best hand usage in this class with terrific punching power and a diverse arsenal of counters that fit his skill set. One of his favorite moves, as shown in the first play above, is a counter snatch move. He’ll start with a speed rush and a two-hand punch then pull forward on the blocker to get him off-balance and bend the arc to the quarterback. The hand strength then translates to the running game where he plays with great leverage and pad level to get upward momentum with “hands above eyes” technique. On the negative side, Winovich is undersized to play in the trenches at the next level, but he’s one of four players in this class to receive an 85.0 grade or higher from Pro Football Focus against both the run and pass.

Miller is an undersized sub-rusher that had eight sacks for the Crimson Tide last season. They’re built a little bit differently, but his skill set reminds me of Derek Rivers. Miller has immense pass-rushing potential and also flashed the ability to drop into coverage. He fits in the Patriots as a stand-up edge rusher in a similar mold to Kyle Van Noy with less off-ball linebacker work. Miller has insanely long arms and bend to turn the corner, but his nuance as a pass rusher might be the most impressive aspect of his game. He uses a series of stab (long arm) and swipe moves thanks to his arm length to get into the chest of blockers. Due to his size (247 pounds), Miller can get pushed around at the point of attack, which might limit his ceiling as an every-down player, but he could be the player that the Patriots wanted when they drafted Derek Rivers.

Another Alabama product, Buggs is a much different prospect than Miller. Buggs tested poorly at the combine and has a compact build with shorter arms. However, he has above-average size in terms of height and weight and is a thumper along the defensive line. Buggs is physical and violent with his hands taking on blockers and popping them backward. He pressured the quarterback at a high-level on a per snap basis and plays the game with a mean streak that’s similar to Dont’a Hightower. His functional athleticism and short-area quickness are major concerns, but he’s a Patriots-type player that makes every collision count.

Jackson isn’t your typical sleeper pick, but in such a loaded defensive line class, he’s a forgotten prospect. He had solid production for three consecutive seasons at Miami and has prototypical size for the position. With above-average length, he has excellent play strength to both set the edge against the run and win with power as a pass rusher. Jackson’s power at the point of attack was overwhelming for college tackles, and he’s got a good feel for where the quarterback is in the pocket. The Miami product is still developing as a pass rusher; he needs a go-to move and counter outside of his bull rush, and his first-step is only average. But the Patriots love defensive linemen that can consistently set the edge and collapse the pocket, and that’s Jackson’s to a tee.