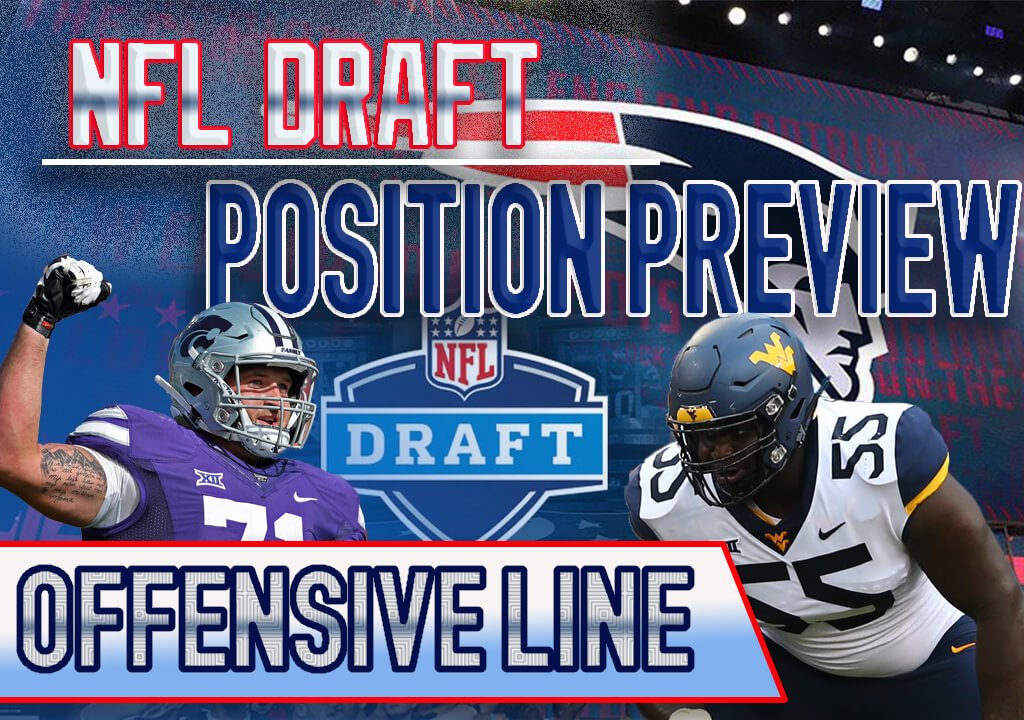 This is part seven of a position-by-position series previewing the best Patriots fits in the 2019 NFL Draft.

For the second consecutive offseason, the Patriots find themselves in a state of turnover at the left tackle position after the Oakland Raiders made Trent Brown a very rich man.

Back in February, I wrote that the Patriots have their next starting left tackle in Wynn, and I still believe that to be the case.

However, Wynn is recovering from a severe Achilles injury, and the Patriots need an insurance policy and a new swing tackle, which could come in the form of one player.

Cannon will also turn 31 years old in May and has some hefty cap hits over the next few seasons.

The Patriots, as they did with Brown, could also turn to the trade market and add a veteran to the mix.

Here are the best fits for the Patriots at offensive tackle in the draft, and one interior offensive lineman that is on New England’s radar:

Risner might come off the board early, but Dante Scarnecchia would love his nastiness and football IQ. A right tackle at Kansas State, Risner will likely stick on the right side due to average footspeed, but his hand usage and strikes and power at the point of attack are off the charts. He plays with great balance and a wide base to stay square on his blocks and is an old-school people mover in the running game. Risner is also very efficient on combination blocks and has a great radar at the second level to make blocks on the move. Scar will have to fix a slight false step in Risner’s kick slide in pass protection, but it didn’t hurt him all that much, as he only allowed five total pressures all last season (zero sacks). Risner’s approach and smarts make him a great fit in New England as the right tackle of the future.

Cajuste is another powerful man with a muscular build that protected Will Grier’s blindside for the Mountaineers last season. Cajuste only allowed one sack in his last three seasons at West Virginia, but it’s his power, length and explosiveness in the running game that set him apart. He has excellent leg drive and uses hip and upper-body torque along with strong hands to turn defenders out of gaps. As a pass protector, Cajuste has great posture and adequate foot quickness to stay on the left side, and he processes games (stunts, twists, etc.) quickly. Cajuste struggles at times to leverage blocks due to poor knee bend, but he has the build and athleticism to play tackle at the next level.

Whenever Bill Belichick points out a prospect, you have to take note, and that was the case with Oklahoma’s Bobby Evans in a great snapshot of Pro Day Belichick by the Boston Globe’s Jim McBride. As Belichick stated, Evans, who started at the left tackle on the best offensive line in the country, is a brick wall. He makes up for lack of ideal height with long arms, and he uses those along with the some of the heaviest hands in this class to stun defenders. His hand usage and strikes are elite, and his grip strength will pick players up and move them off their spots. Where Evans falls down the board a bit is in pass protection where he fails to get much depth out of his stance and lacks knee bend to drop his pad level, and tends to lunge when he’s beaten in a rep. However, he offers swing tackle value with experience at both left and right tackle, and with Brady’s clean dropbacks, he can hit his set points and force defenders to go through him, which isn’t easy.

Little is a high-upside prospect that has some potentially fatal flaws when it comes to technique and balance. The positives are that Little is well-built for a left tackle and is very explosive out of his stance with the foot quickness to slide with edge rushers. Little has ideal arm length for the position, and he locks out those arms to control the point of attack along with strong independent hand usage to fight off pass rushers. His movement skills are apparent, and he backed that up with great burst and agility scores at the combine. He’s not a people mover, he’s a blindside protector, and again, contact balance and a lack of knee bend could do him in at the next level. There are varying degrees of opinion on Little, but with Scarnecchia there to refine his technique, he has starter potential.

(right tackle on all plays)

Howard is a small school prospect that was tremendous at the Senior Bowl and is now in the second round conversation. Believe it or not, the 322-pound Howard was a High School quarterback, and that shows up in his movements. He’s incredibly smooth and fluid in his pass sets with excellent knee bend and quickness in his slides to mirror pass rushers. Howard also uses a series of jabs and counter punches to keep edge rushers off-balance rather than using the same punch on every pass set. As a run blocker, Howard’s speed (89th percentile in the 40-yard dash) makes him a weapon as a move blocker, and he always keeps his feet moving as he engages to win with body positioning. Another great note about Howard: he flipped tackle spots mid-game at Alabama State. The Hornets used two quarterbacks, one left and one righty, and Howard would protect the blind side regardless of who was in the game, offering up incredible versatility and swing tackle potential. Howard will have to improve his core strength and hand placement to win against power in the pros, but there’s a lot to like about his game.

If I were a betting man, my money would be on Scharping as the Patriots’ pick. The Northern Illinois product is a prototypical Patriots pick; he’s very bright with a high IQ, poised and only allowed one sack in the last three seasons. Scharping started four seasons for the Huskies with experience at both left and right tackle. He’s a film junky that adjusted his game plan each week based on his opponent and understood his role on every single play. Scharping drops anchor with ease against power rushers and showed promise as a run blocker. However, he’ll have to clean up his footwork and pass slides to start at the next level. There’s some gallop to his slides instead of choppy feet, and he opens up too soon leaving himself vulnerable to inside counters. At the very least, Scharping would be a high-end backup that you can rely on as an insurance policy.

McGary isn’t as freaky of an athlete, but he reminds me of this year’s Kolton Miller. McGary tested in the 73rd percentile at the combine with great showings in all the movement tests. He’s also a monster of a man at a shade over six-foot-seven. McGary started for three and a half seasons at Washington and improved little by little each year, and he’s got functional power and tenacity to create movement at the point of attack. Technique wise, he also has a solid upward strike with his hands as a run blocker to generate leverage and jolts defenders backward regularly. However, McGary is a mess in pass protection, which makes it difficult for me to project him on day two, or even as a first-round pick as some have said. He misses set points, slides with a narrow base, doesn’t gain enough depth with a short first step and his feet are often late to react to mirror against edge rushers. He’s on the list because of his upside. McGary is a total project, but if you can fix his pass sets, then you have a potential starting tackle.

All signs point to the Patriots taking a long look at Lindstrom early in this draft. The Boston College product had a private workout with coach Scarnecchia at the BC pro day, and his tape is tremendous. Lindstrom is an elite athlete testing in the 96th percentile and has football in his blood with his father, brother and uncle playing on the offensive line for the Eagles in their careers. He also started at right tackle and both guard spots and is training at center in case teams want to play him there. His quickness off the ball pops on tape, and he thrives as a move blocker with incredible climbs to the second level and pull blocks on the interior. He’s also a high-level pass protector that has excellent knee bend and balance to stay in front of all types of pass rushers, and he’s very responsive to defensive line movements and blitzes. Lindstrom has everything the Patriots look for in their interior offensive linemen and would start for your team for the next decade barring injury.

(left tackle on all plays)

Edoga is an undersized tackle prospect that makes up for lack of height in his arm length (71st percentile). Although he’ll struggle with power, he allowed just three hurries on 304 pass blocking snaps last season for the Trojans. He’s a gifted athlete that has stellar foot quickness, an explosive first step and can mirror edge rushers with ease. He also uses his athleticism in the running game as an excellent combination and move blocker with rare knee bend to adjust to moving targets in space. In many ways, Edoga reminds me of former Pats third-round pick Antonio Garcia. Garcia was taller with shorter arms, but both have unique movement skills and struggle to anchor against bull rushers. Edoga has starting potential on the left side if he can improve his core strength, and in the short term, he could be a unique tackle eligible option.