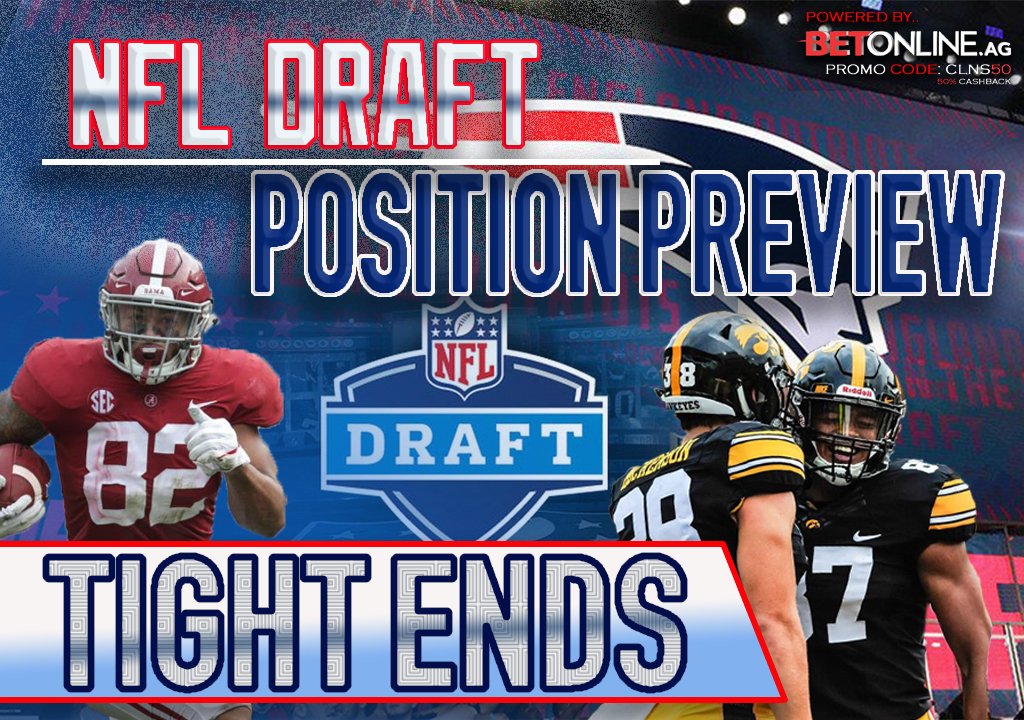 This is part one of a position-by-position series previewing the best Patriots fits in the 2019 NFL Draft.

The Patriots face one of their toughest tasks of the Belichick era as they try to replace Rob Gronkowski after he announced his retirement on Sunday.

Gronk was a unicorn. He’s one of a kind, and there won’t be another player like him meaning one player won’t replace his production alone.

Many things made Rob Gronkowski unique, but his dual capabilities as a blocker and receiver aren’t easily replaceable, leaving the Patriots without a critical piece to their running and passing game.

However, the show must go on, and the Patriots are in luck; this year’s crop of tight ends in the draft has a lot of potential, and a few prospects should make instant impacts on their new teams.

There are three high-impact players at the position, but it’s a deep class with potential starters or specialists throughout the seven rounds.

Here are the best Patriots fits at the tight end position in April’s draft:

The good: Hockenson is a top ten player on my board and my highest-graded tight end in the last three draft classes (since I started grading the draft). With that in mind, it’s unlikely that he’ll fall far enough for the Patriots to draft him. The Iowa product is an elite athlete that challenges coverage with explosiveness, natural hands and route running intelligence. He’s also a nightmare after the catch, and you could make a highlight reel out of his run blocking. There aren’t any glaring holes in Hockenson’s game, making him one of the cleanest prospects in this draft.

Iowa moved Hockenson all around the formation using him as an in-line tight end and flexed out as a receiver. On the play above, they motion him into a reduced split. The motion gives Hockenson a free release against soft press coverage. He astutely attacks the defenders inside arm on a diagonal then gets vertical to crowd his man at the top of the route to “step” on his toes before breaking across the field. Most tight ends don’t have that kind of nuance in their route running.

The bad: There are very few flaws in Hockenson’s game. As a receiver, he needs to work on high-pointing the ball. His blocking technique and finishing are tremendous, but he needs to tone down his aggression at times to be more consistent. He fires out of his stance with such force that sometimes he gets himself out of position or off-balance. All of these things are coachable.

Conclusion: Hockenson projects as an instant starter in the NFL with Pro Bowl potential as a do-it-all tight end and a high-end receiver.

The good: Yes, Iowa has two tight ends that received first-round grades from me in this draft. Fant landed in the 98th percentile at the combine, and that athleticism translates to the field. He’s a matchup nightmare with wide receiver skills. Fant can stretch the field vertically, has an enormous catch radius and has soft hands that pluck the ball out of the air away from his body. He’s also a runaway freight train after the catch when he builds up his speed. One of the side effects of being Hockenson’s teammate was that Fant didn’t get the reps as an in-line blocker. He’s a capable mirror blocker right now and does his job in the running game, and his frame suggests that with some technique work he can develop into more of a finisher.

Although calling Fant a big wide receiver is unfair, he’s at his best in the passing game, and here you can see his athleticism at work. Fant runs a slot fade, and after stemming his route towards the defenders inside shoulder, he breaks outside running by a player he out-weighs considerably. His ability to exploit one-on-one matchups all over the field will keep NFL defensive coordinators up at night.

The bad: Fant spent most of his collegiate career out-athleting defenders rather than beating them with route detail. He’ll likely succeed regardless, but to reach his full potential, he’ll need to add more nuance to his routes. Fant has the foot quickness to change directions, but rounded off patterns rather than cutting on a dime. In the running game, he’s a capable blocker, but he needs to get his pads down and unlock his hips to convert more of his natural strength into power at the point of attack.

Conclusion: Fant is oozing with potential as one of the best athletes at the position in some time, but he’ll need to clean up the details to reach his ceiling.

The good: Smith is another top 50 prospect at the position in April’s draft that improved dramatically as a receiver in his last season with the Crimson Tide, something he credited to extra work he put in during the offseason and after practice. He’s a smooth criminal on the field as he changes gears and snaps open at the top of his routes to create separation in his breaks. He also immediately transitions into YAC mode and has excellent field vision, averaging 8.2 yards after the catch last season. As a blocker, Smith is terrific with immense power at the point of attack and was a focal point of the Alabama rushing attack for multiple seasons.

Here, Smith beat press coverage with a nasty stutter or crossover release at the line of scrimmage. After smoking the defensive back at the line, he uses his eyes and body position to sell a vertical route to hold the safety in the middle of the field and then breaks out on the corner route for a touchdown.

The bad: Smith isn’t an athletic freak like Hockenson and Fant. As a result, he doesn’t pop off the tape like those two when you watched him at Alabama and only tested in the 33rd percentile at the combine. Smith has straight-line speed finishing in the 83rd percentile in the 40-yard dash (4.63 seconds), but his agility and explosiveness scores were subpar.

Conclusion: Smith’s ceiling is slightly lower than Hockenson and Fant due to his athletic limitations, but he does everything well and will start for a long time in this league if he stays healthy.

The good: Sternberger is my favorite non-top 50 prospect at tight end for the Patriots. As a receiver, he was a big-play machine for the Aggies hauling in 21 catches of 20 or more yards in 2018, the second-most in a season for a player over the last 15 years in college football. Sternberger is a natural receiver that explodes off the line of scrimmage and ran a diverse route tree in Jimbo Fisher’s pro-style system. He plucks the ball away out of the air away from his body and knows how to use his hands at the top of the route to beat jams and out-physical smaller defenders. He also averaged 8.3 yards after the catch in his final collegiate season and terrorized opposing defenses on seam routes.

We know how much the Patriots love to send their tight ends up the seam, and Sternberger was extremely productive on seam balls at A&M. On the play above, you can see that explosiveness as he clears the linebacker and gets inside position on the safety with a rocker step without slowing down. Then, Sternberger drags the safety another 25 yards after the catch.

The bad: For better or worse, Sternberger is currently a big wide receiver. He struggled to hold up as an in-line blocker, receiving a 56.8 run-blocking grade last season from Pro Football Focus. He also needs to show some more savviness in his routes to establish a better feel for zone coverage and beat defenses consistently on a horizontal plane.

Conclusion: If the Patriots want a receiver that can make an instant impact, Sternberger offers a legitimate man coverage beater and field stretcher, and could grow into himself as a blocker as he fills out and improves his technique.

The good: Warring is a multi-sport athlete with ideal size and an athletic frame. He tested in the 80th percentile in Indy, but it was his tape that made him one of my favorite sleepers in this draft, at least before the combine. To put it simply, Warring can really run and gets upfield in a hurry. Plus, he has rare change of direction skills for a player of his size, and with a basketball background, he knows how to box defenders out and make catches above his head. Although his blocking was inconsistent, he has all the ability in the world to develop into a solid in-line blocker and showed good feel on the move to find defenders at the second level.

Warring’s performance against Nevada last season was eye-popping as he ran routes like the one above in a breakout performance. Warring explodes off the line of scrimmage to eat up the cushion between him and the safety while selling an inside release and then shows rare hip flexibility and explosiveness to change directions at the top of the route dusting the safety for a touchdown.

The bad: At this point, Warring’s NFL success is a complete projection. He’s extremely raw and inexperienced. Warring told me at the combine that he didn’t even touch a football until his senior year of High School, and only played 19 games at San Diego State. He also said that he didn’t think the NFL was a possibility until his college coach discussed it with him after the 2018 season. He also struggled a bit with drops last season.

Conclusion: Warring is a terrific athlete that got better with every game and flashed unique movement skills for a player of his size, but we are projecting based on those athletic traits at this time.

There are better receivers than Wesco in the later rounds, such as UCLA’s Caleb Wilson or Pro Football Focus’ favorite Keenan Brown, but Wesco is a safe bet as a blocker and could blossom as a receiver with an expanded role. He’s an absolute mauler in the running game, and he had a diverse role as a run blocker in the Mountaineers offense. They used him as a traditional in-line tight end, but also as an H-back or fullback off the line of scrimmage. He’ll make an NFL roster by putting guys in the dirt for a living.