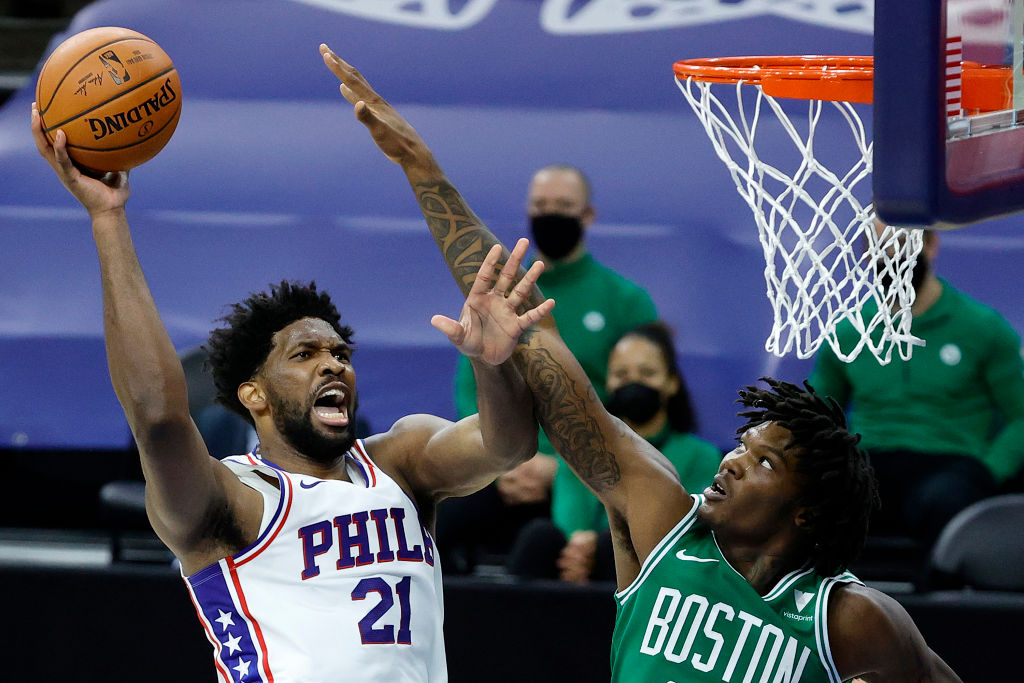 PHILADELPHIA, PENNSYLVANIA - DECEMBER 15: Joel Embiid #21 of the Philadelphia 76ers elevates for a lay up past Robert Williams III #44 of the Boston Celtics during the second quarter at Wells Fargo Center on December 15, 2020 in Philadelphia, Pennsylvania. NOTE TO USER: User expressly acknowledges and agrees that, by downloading and/or using this photograph, user is consenting to the terms and conditions of the Getty Images License Agreement. (Photo by Tim Nwachukwu/Getty Images)
Share
Facebook Twitter Email

The Boston Celtics and Philadelphia 76ers meet for the first of their two-game series and a stretch of 9-of-11 games ahead on the road for Boston. Jayson Tatum (COVID-19) is out, though Brad Stevens did not rule him out for Friday’s contest.

Philadelphia moved toward full health in recent days as well, with Joel Embiid, Seth Curry and Furkan Korkmaz back tonight. Mike Scott (knee) and Vincent Poirier (COVID) are the lone 76ers absences as both teams that had fewer than eight players within the last week return to 15 active bodies. Robert Williams III (COVID) will make his return for Boston.

According to the online sports book Betonline.ag, the 76ers are five-point favorites.

The Doc Rivers era is off to a good start in Philadelphia. Joel Embiid ranks sixth in Basketball Reference’s MVP tracker with 25 points, 11.5 rebounds and 2.9 assists per game 53.6% FG with a 39.4% three-point stroke. The 76ers have outscored opponents by 20 points per 100 possessions with Embiid on the floor, while Seth Curry ranks among the league’s top additions at a sizzling 34-of-92 three-point stroke (59.5%) — No. 1 in the NBA.

A team that struggled with spacing in recent years has carved out space for Embiid with Danny Green, Tobias Harris’ hot shooting and Curry. Their offense still ranks around league average, though. Their defense, mediocre last year, has elevated to top five in defensive rating to put Philadelphia back in the conversation among the best teams in the east.

Ben Simmons is even shooting threes (1-for-5), though his constant inclusion in James Harden trade rumors cast a familiar shadow over his role on the team. He averaged 10.7 rebounds and 11.0 assists per game over Philadelphia’s last three game, though Philadelphia is a net neutral (103-103) during his minutes. He’ll guard Jaylen Brown.

Who are the Celtics? A team that definitively had an identity, where Philadelphia didn’t, several months ago have flipped through COVID and defensive lapses as the 76ers thrive on that end. Brad Stevens said Boston doesn’t have room for error, particularly without Jayson Tatum.

The Celtics are losing by six points per possession with Tatum off the floor this year, and winning by six when he’s on, a 12-point difference heavily swung by the Knicks’ drubbing of Boston on Sunday. Tatum’s presence led Boston to an east-best 7-3 before.

Jaylen Brown and company were enough to blow out a short-handed Orlando team, but the Knicks’ dominance of the paint overwhelmed Boston. Robert Williams III returns to assist on the boards, who ranks fifth in offensive rebounding percentage (min. 100 minutes). He’s Boston’s best option at center right now, but following a two-week layoff and difficult struggle against COVID should be limited. Embiid looms large, as does Tatum’s absence.

Williams held Boston within three points during his minutes in a nine-point Celtics loss. Tristan Thompson, hurt on that night, will likely guard Embiid more tonight, with Williams facing Dwight Howard on the second unit, one of the better bench rebounders to start the year.

Nothing looms larger than Kemba Walker’s effectiveness. Is he the 40% three-point shooter who shot down Philly in the playoffs, or still working back from his knee ailment as he did during his 3-for-13 struggles on Sunday?