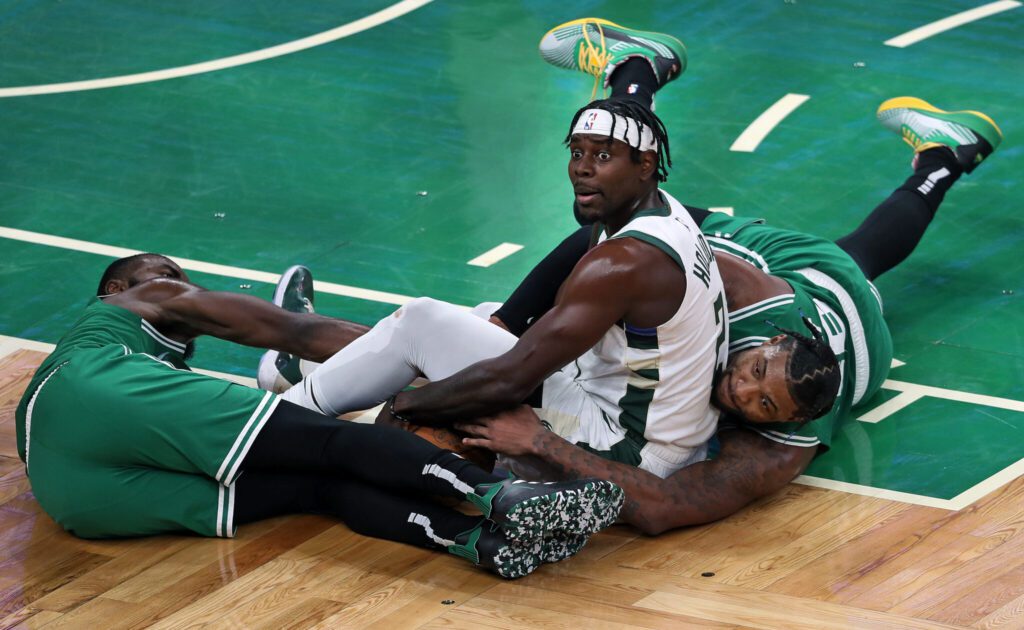 BOSTON - DECEMBER 23: The Bucks' Jrue Holiday looks for a whistle as he battles the Celtics' Jalen Brown (left) and Marcus Smart (right) on the floor for a second quarter loose ball. The Boston Celtics host the Milwaukee Bucks in the opening game of the NBA regular season at the TD Garden in Boston on Dec. 23, 2020. (Photo by Jim Davis/The Boston Globe via Getty Images)
Share
Facebook Twitter Email

The Boston Celtics (21-22, 19-24 ATS) begin a two-game series in Milwaukee ahead of tomorrow’s trade deadline with the Milwaukee Bucks (28-14, 20-22 ATS) after Jayson Tatum downed Giannis Antetokounmpo and co. on opening night with a buzzer beater.

The Bucks list Giannis (knee) and Bryn Forbes (toe) as questionable for the 7:30 EST tilt. Rodions Kurucs (COVID-19 protocol) is out and PJ Tucker (ankle) is probable.

According to the online sports book Betonline.ag, the Bucks are 6.0 point favorites.

The Bucks got a head start on the trade deadline by adding PJ Tucker from Houston as they’ve won seven straight games and 12-of-13. They’re back in the race for the east’s top seed with the 76ers and Nets, while Giannis is averaging 31.4 points, 12.3 rebounds and 7.6 assists over that stretch to reenter the conversation for a third straight MVP award.

Milwaukee still generated 140 points without him against Indiana on Monday while holding the Pacers to 40.5% from the field. Khris Middleton, Pat Connaughton and Jrue Holiday scored 73, and the Bucks converted 61.5% of its threes.

The Holiday addition has allowed the team to take ball-handling and creation pressure off Giannis, who could miss tonight’s game with knee pain. The Bucks rank top-10 in threes made, twos made and assists. They’re the best rebounding team in the NBA, commit among the fewest fouls, turnovers and rank ninth in defensive rating as the second place team in net rating.

It’s difficult to pull from Boston’s opening night victory as the Bucks have since fully integrated Holiday and added Tucker. Boston folded defensively and allowed Giannis 35 and Milwaukee 121. They generated 122 though, with 63 from Jaylen Brown and Jayson Tatum and a 19-point Jeff Teague boost off the bench.

If Giannis plays and the Celtics defend like they did in Memphis, allowing 80 points in the paint, then Giannis could touch 70 points like Devin Booker did four years ago today in Boston.

The Celtics missed Tristan Thompson’s rebounding in Memphis and he held Giannis to 50% (he’s 56.2% this season) from the field in his defensive possessions in December. Middleton, ever the Celtics killer, is averaging 50% from the field over the past two seasons against Boston.

Kemba Walker, making his season debut against the Bucks, averaged 29.3 points per game against them last year and 24.3 PPG in his final Charlotte season since they drop below screens. His ability to hit spot-up threes, which he’s done inconsistently all season, could swing this game.

Boston, amid trade deadline rumors, could face focus issues after their defensive effort seemingly lapsed in a loss to the Grizzlies on Monday.