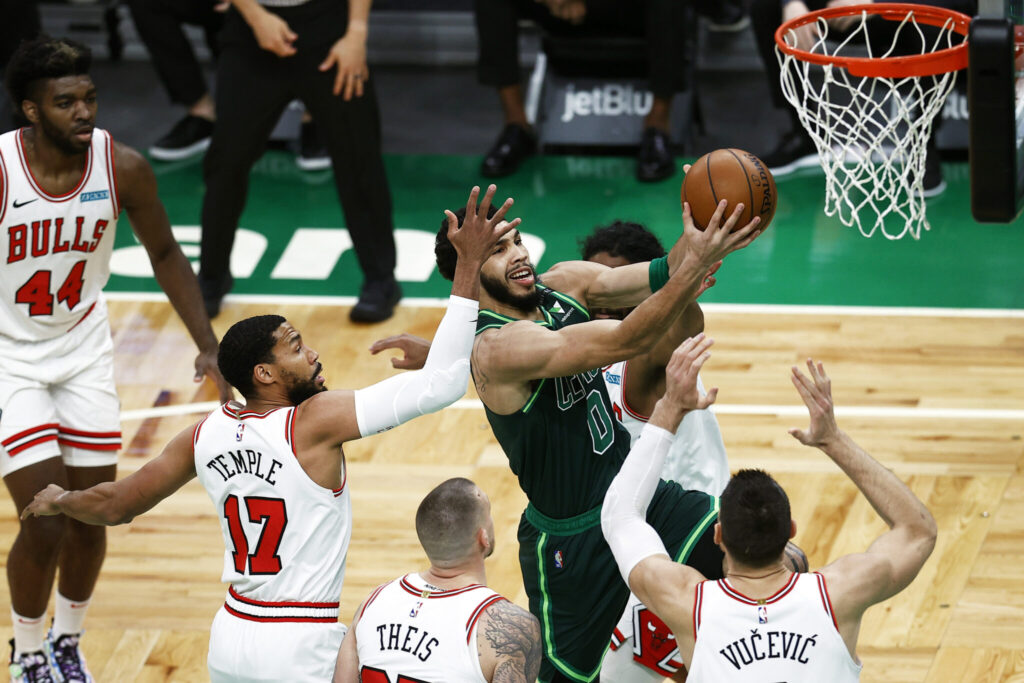 BOSTON, MASSACHUSETTS - APRIL 19: Jayson Tatum #0 of the Boston Celtics takes a shot past Garrett Temple #17 of the Chicago Bulls during the first quarter at TD Garden on April 19, 2021 in Boston, Massachusetts. NOTE TO USER: User expressly acknowledges and agrees that, by downloading and or using this photograph, User is consenting to the terms and conditions of the Getty Images License Agreement. (Photo by Maddie Meyer/Getty Images)
Share
Facebook Twitter Email

According to the online sports book Betonline.ag, the Celtics are 4 point favorites.

Zach LaVine made his return from COVID-19 protocol scoring 13 points on 5-of-11 shooting in a win over Charlotte. Troy Brown Jr. (ankle) is out.

Jaylen Brown remains out for the Celtics as he deals with a sprained ankle. Robert Williams III (turf toe) is questionable, with Tristan Thompson (chest) and Romeo Langford (concussion protocols) probable to return.

The Bulls are led in scoring by first-time All-Star Zach LaVine. He is putting up 27.2 points per game. Nikola Vucevic is second since joining the team, averaging 22.6 points and 11.0 rebounds. Coby White (14.9), Lauri Markkanen (13.8), Thaddeus Young (12.1), and former Celtic Daniel Theis (10.0) round out the team’s double-digit scorers. Chicago beat Boston 102-96 behind 29 Vucevic points three weeks ago.

The Bulls have struggled since, dropping six of their last ten games. This includes losing 4-of-5 coming into tonight. They are 27-39 on the season, good for 11th in the Eastern Conference and 4.5 games outside of of the tenth seed, meaning their playoff hopes are nearly out the window thanks to a late surge by the Wizards.

The Celtics finished 5-5 in their last ten games. Despite this, they have taken home a victory in three of their last four. Boston is 35-31 on the season, placing them in sixth in the Eastern Conference. They are tied with Miami in terms of record but hold the tiebreaker over them so far this season. Atlanta is one game ahead of the C’s in fifth place.

Boston’s backup big men will have to step up tonight if Williams and Thompson are both limited. Luke Kornet and Grant Williams need to contribute. Vucevic is an offensive force, so stopping him will not only be a huge challenge for these guys, but a necessity.

Lastly, let’s see another great performance from Walker. He tied his season-high last game with Brown out, so it will be important for him to continue that hot stretch. He and Fournier have looked really solid lately, and having that production will be huge for the C’s down the stretch of the season and into the playoffs.