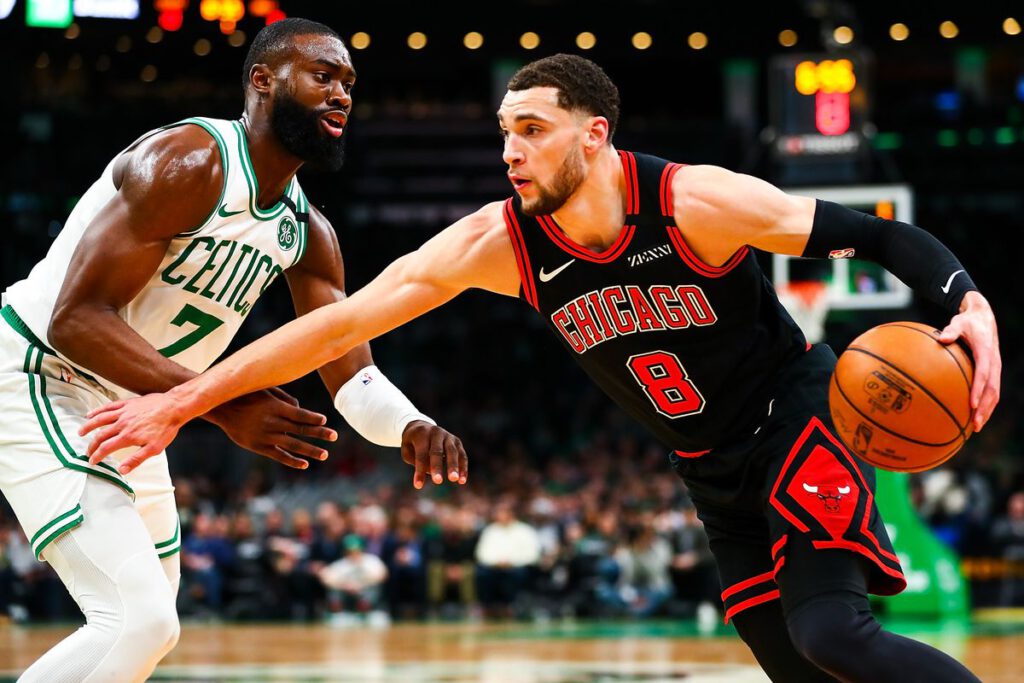 The Boston Celtics (9-6, 8-7 ATS) face the Chicago Bulls (7-9, 11-5 ATS) at 9 p.m. to begin a string of seven of their next eight games on the road. Chicago won three straight before its loss to the Lakers over the weekend, while the Celtics enter getting swept by the 76ers before scoring a 38-point win over Cleveland yesterday.

According to the online sports book Betonline.ag, the Celtics are 4.0 point favorites with the return of Jayson Tatum. He’ll play in a limited capacity, with Kemba Walker out resting his knee.

Payton Pritchard (knee) and Wendell Carter (thigh) will not play for their respective teams either.

The Bulls, unlike the Cavs, place an enormous amount of pressure on opposing defenses. Before the Lakers loss, they had scored 110+ in nine straight games and have reached that mark in all but four of their 16 matchups.

Zach LaVine is a microwave scorer, producing even above Jaylen Brown’s level, in what will mark a meeting between two of the more explosive shooting guard scorers in the league. LaVine is scoring 26.8 points per game on 38% three-point shooting, while his Bulls match that mark from outside and score 116 PPG (5th).

Their offensive rating is only 109 though, with a -2.7 net rating due to porous defense and 18 turnovers per game. They allow the third highest opposing field goal percentage (47%) and send teams to the line 26 times each night (27th).

Chicago can fill the floor with shooters, from the spacing four Lauri Markkanen, to the explosive young Coby White, to wings like Otto Porter, Garrett Temple, Denzel Valentine and the rookie Patrick Williams, all cashing in 40% of their looks from outside. Boston will get torched if they play some of the worst defense we’ve seen them play.

Gather stops and win. Marcus Smart and Jaylen Brown forced a flurry of Cavaliers turnovers to run away with the game in Boston. Now they’ll get to guard White and LaVine on the ball. With no Kemba Walker, Jeff Teague will likely start alongside the regulars. Last year, LaVine shot 4-for-9 against Brown, while White shot 0-for-5 against Smart.

Most of Chicago’s lineups are net negatives, including two of their three most-used without Carter. Though the Bulls have outscored opponents per 100 possessions in four of their five most-used lineups that involve backup big Thad Young.

The Celtics will draw a big punch tonight, but Chicago’s inability to defend the rim and propensity to turn the ball over will likely fuel big nights from Brown and Tatum. Boston averages 18.5 points off turnovers, while Chicago allows over 20.

Tatum could play anywhere between 10-25 minutes after two weeks off, based on how Boston handled Robert Williams, though Brad Stevens said each case is different, and previous workload is a consideration.