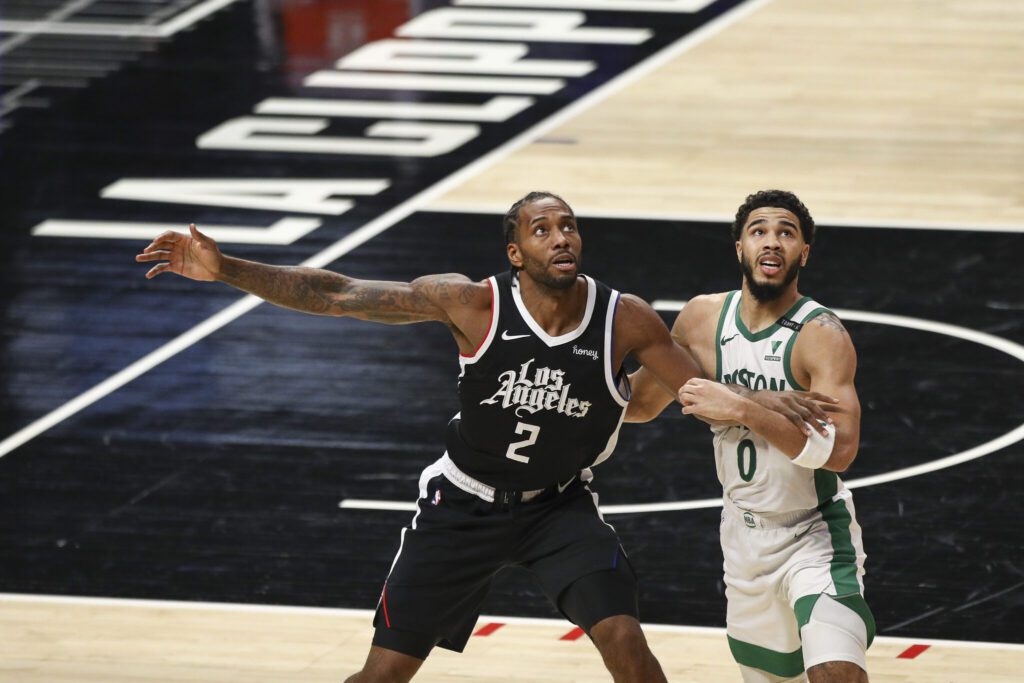 LOS ANGELES, CALIFORNIA - FEBRUARY 05: Kawhi Leonard #2 of the LA Clippers watches for a pass defended by Jayson Tatum #0 of the Boston Celtics at Staples Center on February 05, 2021 in Los Angeles, California. NOTE TO USER: User expressly acknowledges and agrees that, by downloading and or using this photograph, User is consenting to the terms and conditions of the Getty Images License Agreement. (Photo by Meg Oliphant/Getty Images)
Share
Facebook Twitter Email

Paul George will play for LA this time, with Patrick Patterson, Daniel Oturu and Jay Scrubb are out for the Clippers.

According to the online sports book Betonline.ag, the Clippers are 4.5 point favorites, with Boston underdogs for the first time since Feb. 9 at the Jazz.

The Clippers are 7-4 since losing to the Celtics in LA, losing their 12-point advantage after the first quarter due to Jayson Tatum’s 34 points and a flurry of Carsen Edwards shots. Paul George sat that game out with a right toe injury.

Their three-point shooting has dipped in the weeks since with Kawhi Leonard down to 36% over that stretch while still averaging 28 points per game. George is averaging 20, with Lou Williams close behind at 17 while Marcus Morris is shooting 48% from three over his last 13 games.

Boston held LA to 43.8% after the Clippers started 58% from outside in the first half. Ty Lue’s team is still on the edge of team shooting history with a 41.6% mark from outside. Their 110 defensive rating is the league median.

Patrick Beverley and George missed the February meeting between these teams and will be available as capable defenders on Jaylen Brown and Kemba Walker, who have shot inconsistently this season.

This is the fully-loaded version of LA and the limited one required one of the great second halves of the season for Boston to narrowly escape. Boston’s movement has improved with Walker facilitating in crunch time, Tatum had his best two performances in weeks over the weekend and finally looked like his all star self in the closing minutes of the win over the Wizards. He shot 6-of-6 at the rim, though it’s still the hapless Washington defense.

The Celtics have found ways to be better defensively, but their rim protection is periodically a mess. Ivica Zubac peppered Boston’s defense with pick-and-roll dives last game. When Beverley is available LA outscores opponents by 10 points per 100 possessions, above even George’s net rating.

Robert Williams thrived on Friday and struggled on Sunday as a barometer for how good Boston’s defense can be when he’s available. Boston will need to win this game on that end of the floor.

They flashed an ability to grab offensive boards against the a good Clips rebounding unit last time, but they closed the game out with lockdown three-point defense. It’ll be more difficult this time. The Celtics are 10-5 at TD Garden.