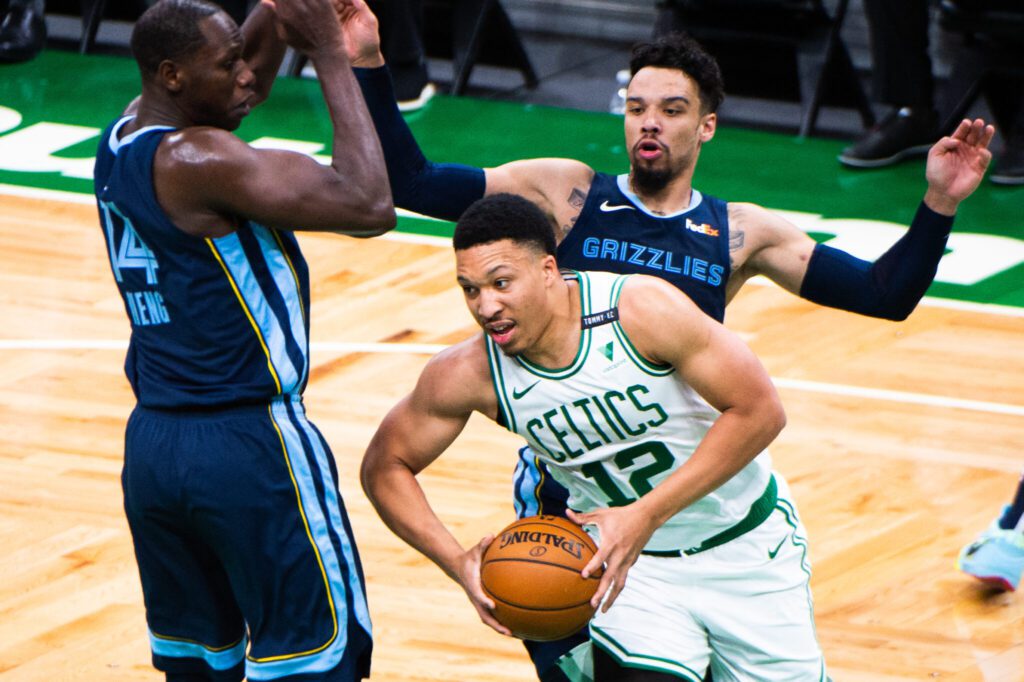 BOSTON, MA - DECEMBER 30: Grant Williams #12 of the Boston Celtics drives to the basket in the first half against the Memphis Grizzlies at TD Garden on December 30, 2020 in Boston, Massachusetts. NOTE TO USER: User expressly acknowledges and agrees that, by downloading and or using this photograph, User is consenting to the terms and conditions of the Getty Images License Agreement. (Photo by Kathryn Riley/Getty Images)
Share
Facebook Twitter Email

The Grizzlies will be without Jaren Jackson Jr. (knee), as they have been for most of the season.

According to the online sports book Betonline.ag, the Grizzlies are 2.0 point favorites as Boston continues to struggle without Walker.

The Grizzlies have emerged as a .500 team in the west playoff race despite their bottom-10 free throw and three-point attempt rates. Their offense is ranked 21st in efficiency. Top-five marks in defensive rebounding and turnover percentage have bolstered Memphis to seventh in defensive rating (109.6), enough for a +0.3 net rating.

It’s no surprise to see a quality team in the tougher conference favorited over a Celtics team that has lost five straight games without Walker by an average of 8.2 points. The sub-.500 Grizzlies are 10-6 against the eastern conference.

One of those losses was a wire-to-wire blowout in Boston shortly after Ja Morant injured his ankle. Jaylen Brown scored 42 points on 15-for-21 shooting in the win, setting the standard for his career all-star campaign. His 10 three-pointers against the Magic yesterday neared that effort.

Brown wasn’t tasked with guarding Morant then. The young Grizzlies standout is averaging 19.0 points and 7.4 assists per game this season, but his efficiency has dipped to 43.7% from the field. He leads a Memphis offense that ranks second in two-pointers attempted and 22nd in efficiency there.

The Celtics organized one of their great ball movement and defensive efforts of the season in a blowout over the Magic on Sunday. They held Nikola Vucevic to 22 points, Aaron Gordon to 12 and the Magic to 96 on 38.1% shooting.

Daniel Theis played a significant role against a shooter and slasher in Vucevic. Now, Robert Williams III will be counted on to step up against a banger in Jonas Valanciunas. If Memphis is attacking the paint repeatedly and avoiding threes as they have all season, Williams’ rim protection and Theis’ ability to avoid fouling will prove vital. Valanciunas is shooting 55.6% from the field, though Memphis is not inflicting fouls often (25th).

Marcus Smart needs to toe the line on offense between aggressive scorer and facilitator as he did with 11 points and eight assists yesterday. Boston is receiving no scoring from its bench over the past three games (21.7 PPG). Memphis allows 37% three point shooting, but create the most steals per game (9.8) in the league. Smart’s approach will sway the offense above or below 100 points, and determine if Brown and Tatum can be efficient with the threat of Walker absent (40.6% FG in the five losses.