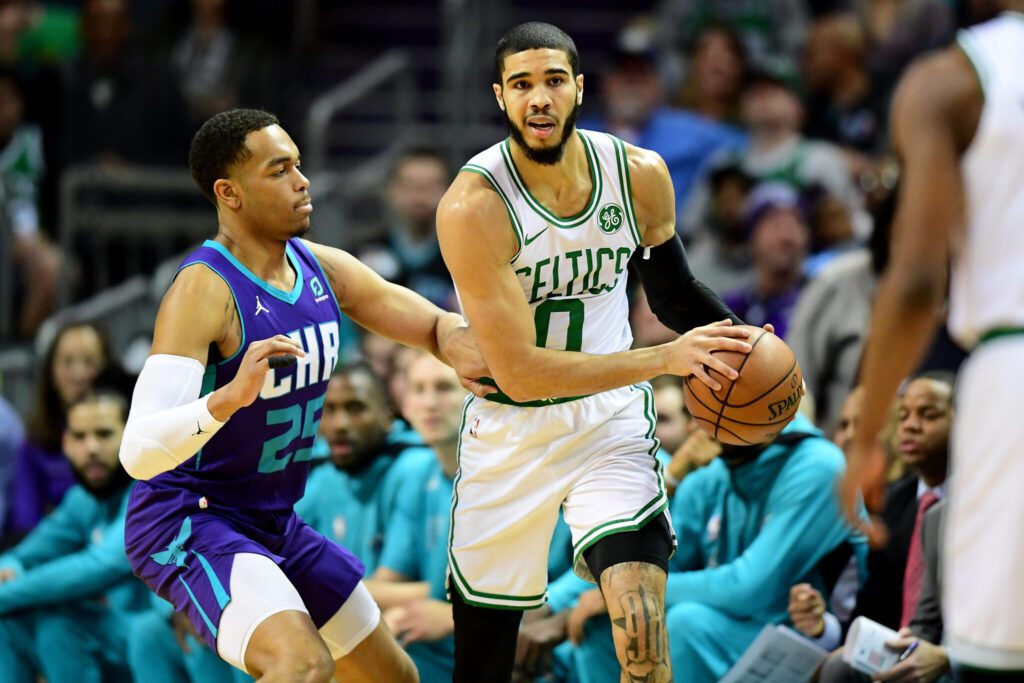 CHARLOTTE, NORTH CAROLINA - DECEMBER 31: Jayson Tatum #0 of the Boston Celtics is guarded by PJ Washington #25 of the Charlotte Hornets during the first quarter during their game at Spectrum Center on December 31, 2019 in Charlotte, North Carolina. NOTE TO USER: User expressly acknowledges and agrees that, by downloading and or using this photograph, User is consenting to the terms and conditions of the Getty Images License Agreement. (Photo by Jacob Kupferman/Getty Images)
Share
Facebook Twitter Email

The Boston Celtics (24-25, 23-26 ATS) planned to welcome Gordon Hayward back to TD Garden for the first time since he joined the Charlotte Hornets (25-23, 27-20-1) at 6:00 p.m. Hayward sprained his foot on Friday and will likely miss the remainder of the regular season, kicking his return back to year two like Kyrie Irving’s was — unless these teams meet in the postseason.

LaMelo Ball (wrist) will have to wait until next season to play the Celtics, as he’s expected to miss the entire season. Hayward (foot) is out at least four weeks, with Malik Monk (ankle) sidelined for two.

Jaylen Brown (knee) is questionable after aggravating his knee against Houston on Friday. Tristan Thompson (COVID protocol) and Semi Ojeleye (side) are out. Romeo Langford is expected to make his season debut.

According to the online sports book Betonline.ag, the Celtics are 9.0 point favorites.

The Hornets enter 4-2 since losing LaMelo Ball to season-ending wrist surgery, carried by former Celtic Terry Rozier, who averaged 21.6 points per game during that stretch. Devonte Graham returned from knee injury to average 16.9 PPG alongside him. Now, they’ll assume a greater load with Hayward down for the regular season and possibly more with a sprained foot.

Charlotte is 1-3 without Hayward this season, essentially the difference between the Hornets being the current fourth seed in the east and the eighth seed as the Celtics are now. This is the roster the Hornets missed the playoffs with last season, also down Malik Monk. Cody and Caleb Martin, along with trade deadline addition Brad Wanamaker and Jalen McDaniels will need to play more.

Rozier and Graham, while explosive, rely almost exclusively on the three-pointer for their offense and rarely shoot over 45%. Their defense has ranked around league average, allowing 112 points per 100 possessions while scoring 111.6. Opponents average 40 threes per game on 36% shooting, while the Hornets allow the third-fewest shot attempts inside the arc and fifth-fewest free throw attempts with Bismack Biyombo anchoring the unit. Charlotte allows over 114 PP100 with Rozier and Graham on the floor.

The Celtics should impose their will against an opponent that’s now offensively limited and lacks the size on the wings to stop Jaylen Brown and Jayson Tatum. Robert Williams III is among the best offensive rebounders in the sport this year and faces one of the worst defensive rebounding units. Kemba Walker faces a smaller back court on his former team, but likely a determined Terry Rozier playing his old team, in turn.

Boston should float by with the higher scoring attack and a rejuvenated transition attack led by Marcus Smart’s three steals and Williams’ two blocks on Friday. The Celtics proved if they locked in defense, they could be a prolific fast break offense. Charlotte will compete, they beat the Pacers handily even with Hayward going down and Bridges is a dangerous cutter while PJ Washington is among the most underrated four-five options in basketball, but the Celtics will win.