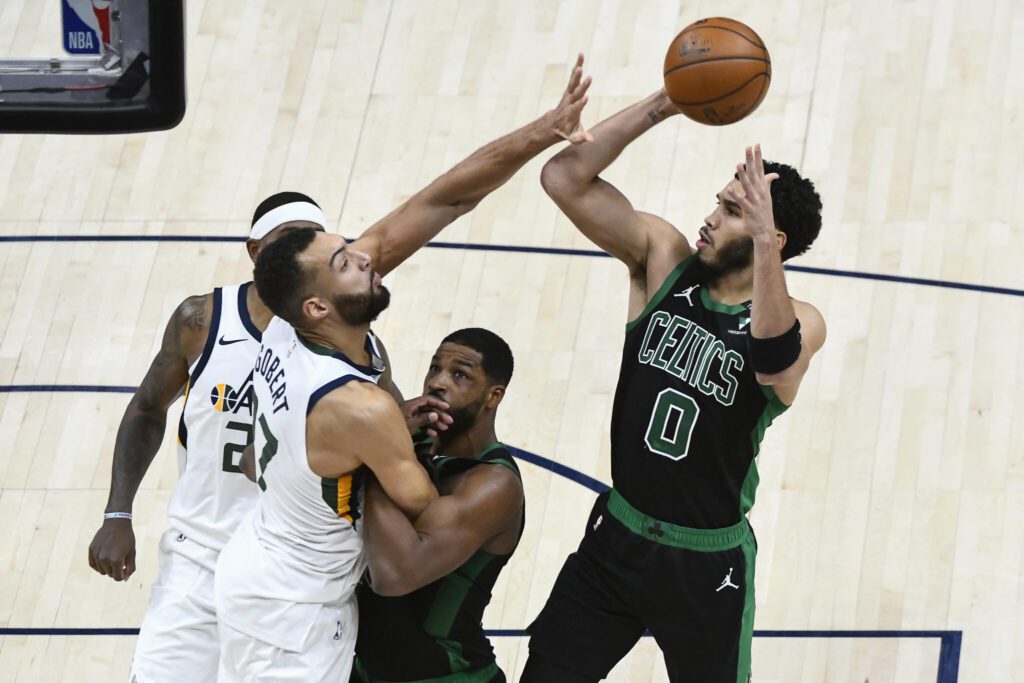 SALT LAKE CITY, UTAH - FEBRUARY 09: Jayson Tatum #0 of the Boston Celtics attempts a shot over Rudy Gobert #27 of the Utah Jazz during a game at Vivint Smart Home Arena on February 9, 2021 in Salt Lake City, Utah. NOTE TO USER: User expressly acknowledges and agrees that, by downloading and/or using this photograph, user is consenting to the terms and conditions of the Getty Images License Agreement. (Photo by Alex Goodlett/Getty Images)
Share
Facebook Twitter Email

The Jazz are healthy aside from Udoka Azubuike (ankle) and new addition Ersan Ilyasova, who has yet to play for the team.

According to the online sports book Betonline.ag, the Jazz are 4.0 point favorites.

Tristan Thompson entered COVID-19 protocol late this afternoon and will miss the game, which will lead to a larger role for Robert Williams III after the biggest game of his career. It’s unclear how large, with the Celtics concerned about overextending his hip even alongside his recent surge in production.

Williams contributed 16 points, 13 rebounds and five blocks in a win over the Rockets as perhaps the best per-minute player in the NBA this season. He did that in 19 minutes, while Brad Stevens went away from “Double Big” with Daniel Theis receiving six minutes.

Over the past month, according to Jay King, Williams has averaged 17.6 points, 14.7 rebounds and 5.2 blocks per-36 minutes. The Celtics outscore opponents by 33 points per 100 possessions when he’s on the floor this season.He’s averaging 18 minutes per game off the bench.

All eyes will be on his minutes with Theis likely to start. Will Williams reach closer to 25-30 for the first time in his career? He recorded six points, four rebounds and two fouls against the Utah front court of Rudy Gobert and Derrick Favors in February. His per-36 fouls per game remains above 4.0 this season.

The Jazz have lost 4-of-6, with wins against the lowly Rockets and Magic, stemming back to a pre-all star break slide. They allowed more than 128 points in three of the losses, one coming in overtime to the 76ers.

Marcus Smart’s return and solid facilitating set up competitive efforts against the Nets and Rockets. His presence should help Boston avoid getting pummeled by Utah’s spot-up shooting and provide box outs, though he remains limited to roughly 20 minutes.

Jayson Tatum and Jaylen Brown shot above 50% for only the first time since January on Sunday, per Jared Weiss. That production continuing, particularly for Brown and his sore knee, will be pivotal to cracking the top-five Jazz defense like others have during the past week. Williams’ vertical gravity helps both of them in expanded minutes at center, with double big over and allowing more spacing overall.

Will Thompson’s minutes be split between both Williamses (Grant included), or will Rob earn all of the playing time Theis doesn’t receive. A more versatile Boston lineup should have enough to steal a win here against the struggling Jazz if Rob can extend his play over a longer period.