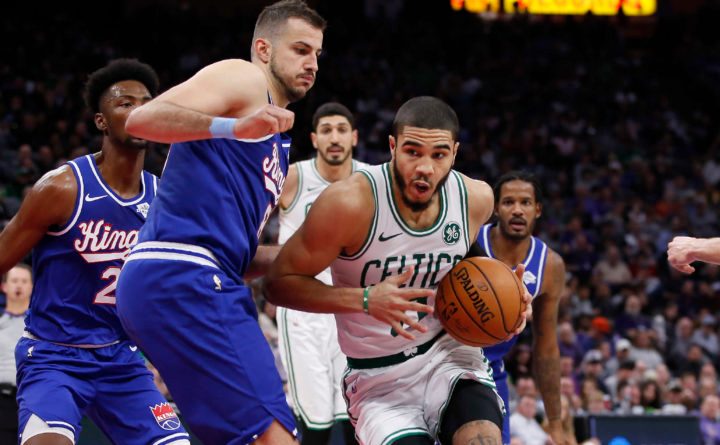 Kemba Walker (knee), Payton Pritchard (knee), Marcus Smart (calf) and Romeo Langford (wrist) are out for Boston, leaving them with three guards. Nemanja Bjelica (back) is questionable for Sacramento.

According to the online sports book Betonline.ag, the Celtics are 1.0 point favorites on the back-to-back.

This matchup doesn’t carry as much fanfare or star power, with national TV tuning out of the Celtics until Friday, but Boston and Sacramento have played thrillers in recent years. Tonight projects to be no different given the defensive struggles of both sides and the Kings’ offensive firepower and dribble penetration.

Marcus Smart missed a game-winning floater in Sacramento and made a layup off the glass to overcome Buddy Hield’s 41 points one week later. Both games were decided by one point, flipping three times in the final 90 seconds of the next game.

Opponents shoot 48% (29th) against Sacramento, with a 39% mark from three (27th). That improved in three of their last four wins, holding New York, Orlando and NOLA under 110.

“We have to continue to commit to that end,” Luke Walton said. “We give up so many points off our turnovers … so we’re making it harder on ourselves with that.”

Despite Sacramento’s defensive lapses, it’s scary looking at the other side and seeing De’Aaron Fox and Buddy Hield against an undermanned Boston back court. Jeff Teague’s lineups have struggled all year, with Carsen Edwards and Tremont Waters sacrificing size despite their competitiveness in their own end.

Since January 1st, C's have a +11.9 net rating when Tatum is not on the floor without Teague, +1.1 when he is. When you watch the lineups in which they share the floor, you understand how culpable Teague is for this. https://t.co/sLz6vL8dbf

Brad Stevens might lean on giant lineups with Jaylen Brown and Jayson Tatum at the guard spots with multiple bigs with a wing. Teague will get some run, but hasn’t played more than 25 minutes this season and no more than 22 since the COVID layoff, as he’s shot 32.7% from the field.

Prepare for another round of Daniel Theis and Tristan Thompson in the starting lineup, which melted down in the opening minutes against Golden State. Grant Williams (4-4, 15 points) and Theis (11 rebounds) eventually rotated in as the hot hands and the bigs dove on Curry around picks to slow him after a 17 point first quarter.

Robert Williams should be able to find success against the Whiteside second unit in the pick-and-roll playing off Tatum and Boston’s star wings have become good enough playmakers to win this game. He’ll be needed as a rim protector too. Credit the Celtics for their recent defensive improvement, but Fox will be hard to contain with small guards and forwards (30.7 PPG last three games). It’s easy to imagine this one going to the final basket.