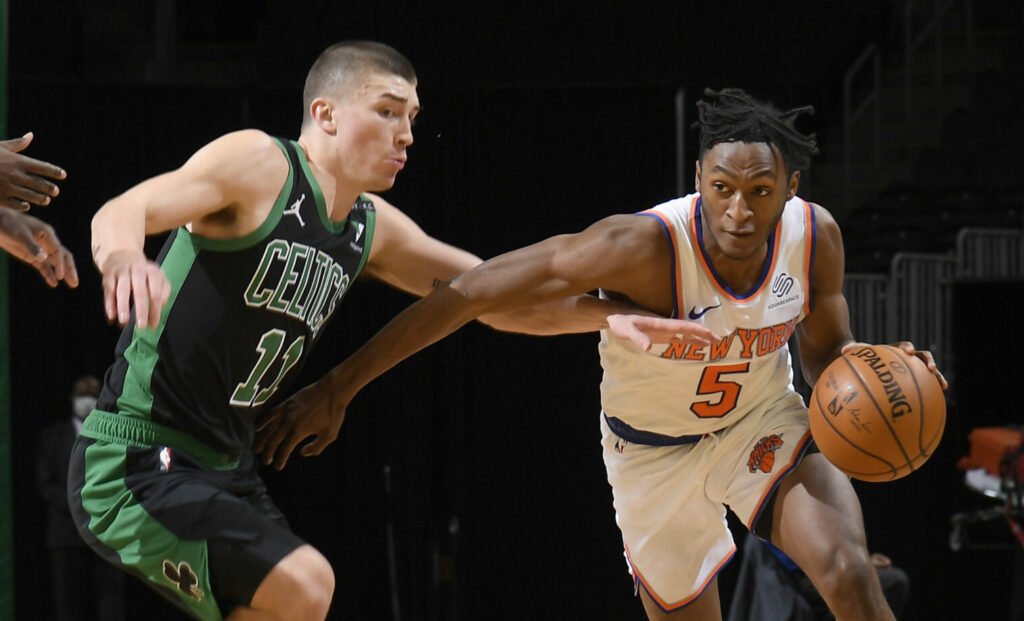 BOSTON, MA - JANUARY 17: Immanuel Quickley #5 of the New York Knicks handles the ball during the game against the Boston Celtics on January 17, 2021 at the TD Garden in Boston, Massachusetts. NOTE TO USER: User expressly acknowledges and agrees that, by downloading and or using this photograph, User is consenting to the terms and conditions of the Getty Images License Agreement. Mandatory Copyright Notice: Copyright 2021 NBAE (Photo by Brian Babineau/NBAE via Getty Images)
Share
Facebook Twitter Email

According to the online sports book Betonline.ag, the Knicks are 12 point favorites.

New York’s injury report consists of only two players. It lists newly signed guard Luca Voldoza as day-to-day and center Mitchell Robinson as out. Robinson missed significant time this season with a broken foot, but could return for the playoffs.

The Celtics do not want to risk injury ahead of their play-in game and will rest the majority of their key players today. Jaylen Brown (wrist) remains out for the season, but six teammates will join him on the injury report. Evan Fournier (knee), Marcus Smart (calf), Jayson Tatum (ankle), Tristan Thompson (pectoral), Kemba Walker (neck) and Robert Williams (turf toe) will not play.

The Knicks won six of their last ten games and 40-31 this season. They find themselves in a tightly contested battle for seeding, with the Hawks (40-31) and the Heat (39-32). New York, currently the four-seed, could fall as far as the six-seed if things do not go their way today. A win will secure home court advantage in the first round.

Boston’s young players control the show tonight as the team nurses injuries in preparation for the play-in game. Tremont Waters stepped up last game, setting career-highs in points (14) and assists (7). Luke Kornet also played well, putting up 12 points, six rebounds, and four blocks vs Minnesota. In addition, Payton Pritchard and Aaron Nesmith get the chance to get in Brad Stevens’ good graces as the playoffs approach.

At 36-35, the Celtics locked themselves in as the seven-seed. They won only four of their last ten games, and their play-in fate revolves around the Hornets-Wizards game today. They play the winner of that game in round one of the play-in on Tuesday.

Boston faces an uphill battle with most of their players sidelined. New York’s defense ranks top five in the league, so an effective offense will be crucial. Waters facilitated the Celtics’ offense to a tee yesterday and they need that passing again in this one. The Knicks always capitalize on their opponent’s mistakes, so Boston has little room for error on offense.

Luckily for Boston, their primary Randle-stopper is available to play today – Grant Williams. Randle shoots 2-for-8 from the field and 1-of-5 from deep when guarded by Williams this season. Williams guarded him for 8:53 of game time this season. Second on that list is Brown with only 4:44. If Williams can slow down Randle once again it makes Boston’s life infinitely easier.

Lastly, the Celtics’ three-point defense needs to be stellar. They improved their closeouts yesterday vs the Timberwolves and must continue that progress today. New York’s three-point efficiency ranks third in the NBA, while Minnesota’s ranks 26th. Yesterday marked a step in the right direction for Boston’s youth, the task today is much taller.