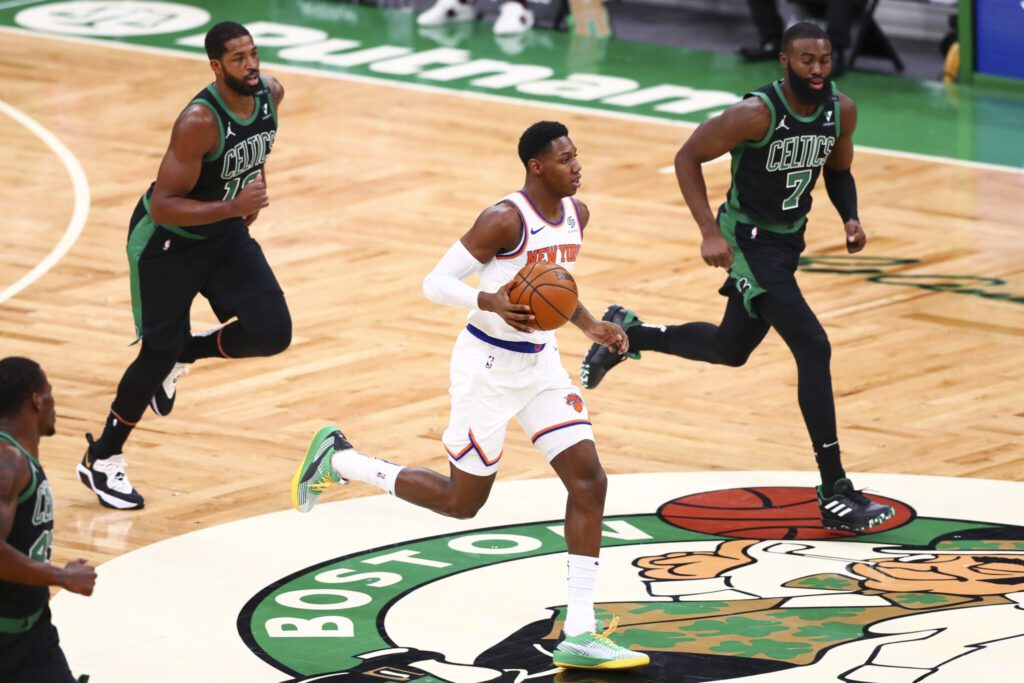 BOSTON, MA - JANUARY 17: RJ Barrett #9 of the New York Knicks dribbles the ball up court doing a game against the Boston Celtics at TD Garden on January 17, 2021 in Boston, Massachusetts. NOTE TO USER: User expressly acknowledges and agrees that, by downloading and or using this photograph, User is consenting to the terms and conditions of the Getty Images License Agreement. (Photo by Adam Glanzman/Getty Images)
Share
Facebook Twitter Email

Kemba Walker (knee) and Evan Fournier (COVID protocol) will sit on the back-to-back and Tristan Thompson will suit up for the first time since Mar. 14.

Mitchell Robinson (foot) is out for New York.

According to the online sports book Betonline.ag, the Celtics are 3.0 point favorites.

The Knicks handed Boston its worst loss of the season in January, when Kemba Walker returned to shoot 3-of-13 and the Celtics mustered only 75 points in a 30-point loss. Walker will sit tonight as his knee management program continues, while Jayson Tatum is available this time after missing the previous game in COVID protocol. The C’s also missed Robert Williams III in that matchup.

Those are no certain boosts against a New York team that emerged as one of the best defenses in the NBA through 50 games. In a year where few teams have committed to that end of the floor and overall points per 100 possessions scored by over one point over last year, Tom Thibodeau’s group allows the fewest points per game (104.1) in the NBA and ranks third in defensive rating at 108.2.

That difference is accounted for by a snail’s pace that ranks last in basketball (96 possessions). They rebound at a top-10 rate, take a bunch of twos and rank 29th in three-point attempts. The Knicks offense ranks 22nd in offensive rating, but they’re top-10 in protecting the ball (13.5 TOV/G).

Julius Randle carries the offense with an inside-out attack, averaging 40.9% from three while finding his teammates off of his ability to power inside for 6.0 assists per game. Derrick Rose, Reggie Bullock, Alec Burks and Immanuel Quickley have shot well for New York from outside on limited attempts. When Nerlens Noel plays, the Knicks boast an elite 101 defensive rating.

The Celtics crumbled against Philadelphia’s defense and the Knicks are at least as good on that end of the floor. Kemba Walker’s absence hurts Boston even more at that end of the floor, while an exhausted-looking Jayson Tatum and Jaylen Brown struggled to score and facilitate throughout Tuesday’s loss.

It’s hard to imagine that group turning it around without Evan Fournier while trying to defend New York’s imposing size. Having Robert Williams III on the floor for longer stretches will help along with the Knicks having been outscored by 7.4 points per 100 possessions since March began. Their defense slid to league average during that stretch.

That opens some opportunity for the Celtics to remain competitive and steal a win here.