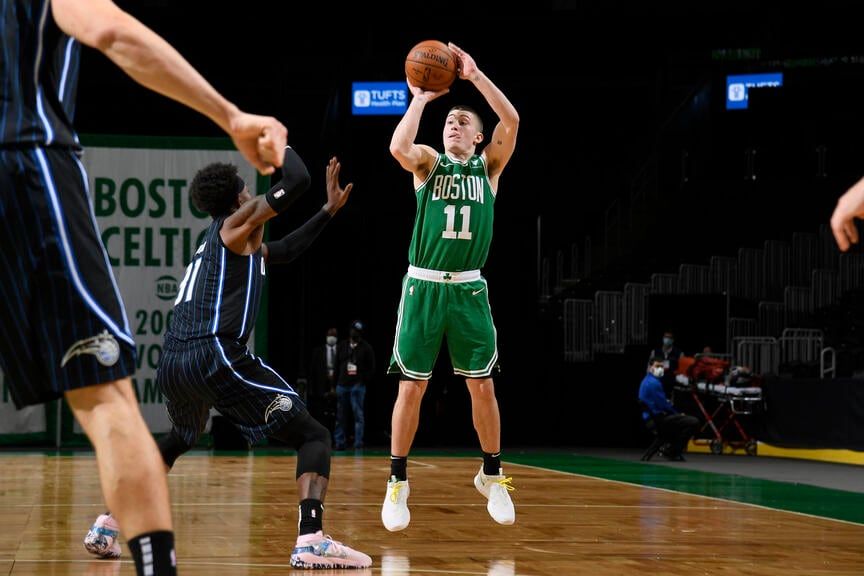 According to the online sports book Betonline.ag, the Celtics are 11 point favorites.

Aside from long-term injuries to Markelle Fultz and Jonathan Isaac, the Magic have a lengthy list of absences. Otto Porter Jr. (foot), Chuma Okeke (ankle), James Ennis III (calf), Michael Carter-Williams (ankle) and Terrence Ross (back) are all out for tonight’s game.

For the C’s, Brown is out due to a sprained ankle which occurred at the end of the last game during his collision with Jayson Tatum. Tristan Thompson is also out, due to a left pectoral strain. Kemba Walker is no longer listed on the injury report and is expected to play.

Orlando is in full rebuild mode, but big man addition Wendell Carter has been playing well since he was traded to the magic at the deadline, putting up 12.5 points and 8.4 rebounds per game with the team. Cole Anthony (12), Gary Harris (11.2), and Dwayne Bacon (10.8) are also contributing in the scoring department to help the Magic win 3-of-4. Old friend Mortiz Wagner has 10.8 points and 3.0 rebounds per game in four games since joining Orlando.

The Magic have lost seven of their last ten games aside from recent wins over the Cavaliers, Grizzlies and Pistons. They are currently 21-44 and sit at 13th in the Eastern Conference.

Jayson Tatum leads the way for the Celtics, scoring 36.8 points a night over the last five games. Jaylen Brown has also been impressive, putting up 26.0 a night over that same stretch before he aggravated his ankle injury on Sunday. He’s now considered day-to-day. Marcus Smart (13.0), Aaron Nesmith (10.8), and Payton Pritchard (10.8) round out Boston’s double-digit scorers over the last five contests.

Boston is 5-5 in their last ten. They are 34-31 on the season, good for seventh in the Eastern Conference. Luckily for them, the Heat are only 0.5 games ahead of them and arrive to Boston next week for a mini series. The Celtics hold a two-game lead over the eighth-place Hornets.

The Magic are a young team that is going to come to fight. They have an extremely youthful backcourt in RJ Hampton and Anthony, who are most likely going to push the pace. Boston will have to keep things moving and not hang their heads after missed opportunities. Orlando will most certainly take advantage of that with the impending return of head coach Steve Clifford from COVID.

With Thompson out, the Celtics are going to rely on Robert Williams III more tonight and his minutes have lowered since he missed over one week with knee soreness. Guys like Luke Kornet and Grant Williams will also have to step into a larger role. Carter, Wagner, and Mo Bamba may not be top-tier centers, but are active enough to bother Boston’s interior.

Tatum is going to have to put on a show once again. Brown is out, so it will be up to him and Walker to carry the load on offense. Solid contributions from three-point land by Nesmith and Pritchard have been helping, but the drive-and-kick game will have to be on point tonight. Tatum has done a great job of getting to the rim lately, and he has to keep it up.