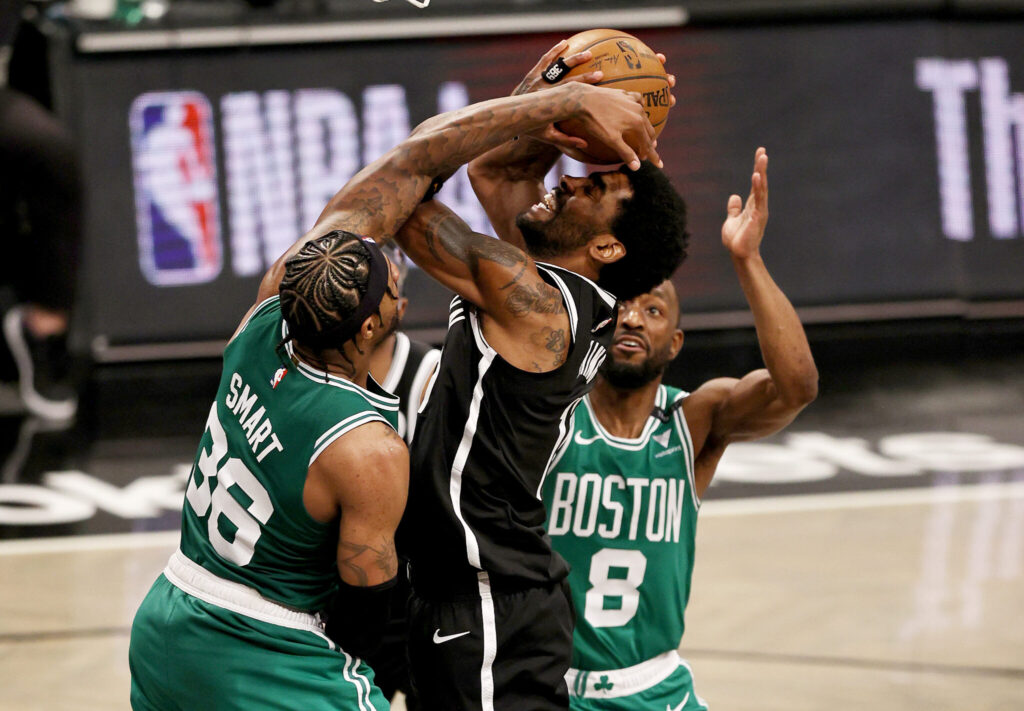 NEW YORK, NEW YORK - MAY 22: Kyrie Irving #11 of the Brooklyn Nets is fouled by Marcus Smart #36 of the Boston Celtics as Kemba Walker #8 of the Boston Celtics defends in the fourth quarter during Game One of their Eastern Conference first-round playoff series on May 22, 2021 at Barclays Center in the Brooklyn borough of New York City. NOTE TO USER: User expressly acknowledges and agrees that, by downloading and or using this photograph, User is consenting to the terms and conditions of the Getty Images License Agreement. (Photo by Elsa/Getty Images)
Share
Facebook Twitter Email

According to the online sports book Betonline.ag, the Nets are 9 point favorites.

Outside of Jaylen Brown and Spencer Dinwiddie, both teams have empty injury reports entering tonight’s game. Robert Williams “should be good to go,” according to Brad Stevens in his Monday press conference.

Brad Stevens spoke about the positives and negatives of Game 1:

“I felt really good about how we needed to play…we weren’t as good offensively…any time you’re in a playoff series I think it’s really important to anticipate what they might do differently…I thought we played good defense…we have to be way better offensively…not a lot of people talk about their [Nets] weakside movement.”

Tristan Thompson commented on the so-called “swagger” the Nets play with:

“Listen, if you have a team with Kevin Durant, James Harden, and Kyrie Irving, you better step on the court feeling good about yourself, but we don’t give a s*** about that. At the end of the day, they put their socks on one at a time just like us.”

Evan Fournier talked about what the C’s took away from Game 1:

“I think it’s kind of hard to say it’s a good experience when you lose…we should all be disappointed because it’s a loss, but you can always learn…you can learn from that, and watch it, and see why we weren’t good… that’s the point of playing through a playoff series, you learn from your mistakes…take the next game, make adjustments, and see where it goes…it went the way it went and we will do better from it.”

Kevin Durant led the Nets in scoring in Game 1, dropping 32 points and grabbing 12 rebounds. Kyrie Irving (29) and James Harden (21) backed him up in the scoring column, but all three struggled from behind the arc. The trio combined to shoot 5-of-24 (20.8%) from deep. Four out of their five made threes came during a third-quarter offensive explosion for Brooklyn.

The rest of the roster struggled even more than the Nets’ big three. Joe Harris’ 10 points marked the only other double-digit scoring performance for Brooklyn. Nic Claxton put up a respectable six points on 3-of-6 shooting, but Brooklyn’s superstars did most of the heavy lifting.

Boston’s stars shot even worse than Brooklyn’s. Jayson Tatum (22 PTS) and Kemba Walker (15 PTS) combined to shoot 11-of-36 (30.6%) from the field. Tatum failed to convert a field goal in the entire second half of the game. Marcus Smart (17 PTS) provided a steady hand for Boston’s offense. Evan Fournier shot 3-of-10 from the field as well, rounding out a tough day at the office for the C’s.

Offensive struggles aside, Robert Williams stole the show for Boston. He recorded nine blocks on the night, setting a franchise record for most in a playoff game. He also added 11 points and nine rebounds to his totals. Williams’ rim protection helped the C’s stay in the game despite their issues on offense.

In a weird twist of fate, Brooklyn hung their hat on the defensive end of the floor in Game 1. They held the Celtics to 21 points or less in three of the four quarters. They disrupted Tatum enough to the point where he stopped being as aggressive in the second half.

Boston’s defense kept them in the game as they held the Nets to only 104 points. It marked the eighth time they scored less than 105 all season. The Celtics managed to get a good contest on 53 of Brooklyn’s 84 field goal attempts (63.1%). Of those not contested well, only nine were considered wide-open shots.

Boston continuously settled for bad shots throughout the game, leading to offensive issues. Robert Williams played a major factor on defense but could have factored in much more on the offensive side of the ball. His pick n’ roll dominance rips through Brooklyn’s undersized big man rotation, yet the C’s ran very few plays for him. The ball handler should look for the pass first rather than the shot in Game 2.

Payton Pritchard earned the highest offensive rating when on the floor (130.8) in Game 1, which begs the question of why he only played 6:39. His offensive production is undeniable, yet in a game where the C’s could not buy a basket, he only attempted one shot? Brad Stevens needs to utilize his offense more in Game 2.

Outside of garbage time, Aaron Nesmith’s defensive rating (75.8) ranked best on the team. Unfortunately, his offensive rating (76.5) leaves much to be desired. The rookie played solid minutes in Game 1 but could do better with some more looks from deep.

In what were unexpected minutes in the first place, Jabari Parker held the best net rating (19.0) in Game 1 by far. Pritchard (9.3) and Robert William (9.0) ranked second and third. Parker provided a nice offensive spark for the C’s and even managed to hold his own defensively. Durant attempted to attack him, but Parker held him to 2-6 shooting in 1:47 of matchup time. Opponents shot 4-of-12 (33.3%) in total when guarded by Parker in Game 1.

As could be inferred by his stellar stat line, Williams’ defensive rating (93.2) was stellar. In just 22 minutes of action, he made a larger impact than all of the starters combined. None of Boston’s starters finished with a positive net rating on the game.

The Celtics’ defense came to play, but the offense sputtered out throughout Game 1. Brooklyn also struggled offensively, so the Celtics may have missed their best opportunity to capitalize and steal a win. However, with the way the C’s defended in Game 1, they should be able to hold Brooklyn to similar scoring numbers. Boston bounced back well from poor shooting nights all year long, and the same should be expected in Game 2. If the C’s defend even half as well tonight and add some offensive firepower, they may just leave Brooklyn tied at 1-1.