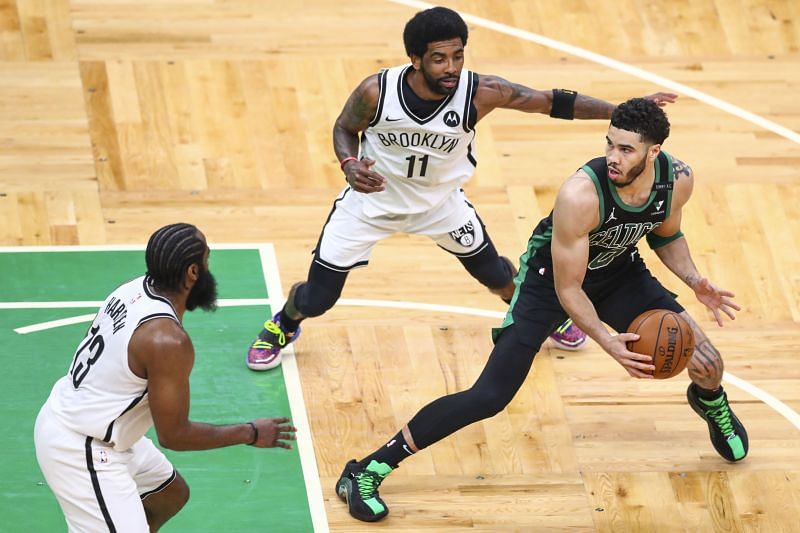 Its do or die for the Celtics tonight as they face a win or go home situation in Game 5 against the Brooklyn Nets. Brooklyn leads the best of 7 Eastern Conference first round matchup 3-games-to-one.

The Nets (-8.5) are heavy favorites to win tonight and wrap up the series according to the online sports book Betonline.ag.

The Nets still list Jeff Green on their injury report. He continues to deal with a strained plantar fascia. Outside of Spencer Dinwiddie, Alize Johnson is the only other player listed.

Kemba Walker and Robert Williams remain doubtful for Game 5. Both players did not play in Game 4.

Brooklyn’s big three carried the load in Game 4, scoring 105 of the Nets’ 141 points. Kevin Durant led the way with 42 points, while Kyrie Irving scored 39 in the midst of constant boos from the crowd. Meanwhile, James Harden set his personal best for assists in a playoff game (18) and landed himself second in franchise history for that mark.

Marcus Smart and Evan Fournier followed Tatum up in the scoring column with 16 apiece. However, they shot an inefficient 9-27 (33.3%) from the field combined. Past that, three bench players tallied the next most points. Payton Pritchard (12), Aaron Nesmith (11), and Jabari Parker (10) shot 13-20 (65.0%) FG as a collective.

Brooklyn poured on the points in Game 5, scoring 141 on extremely efficient shooting splits. The team passed the ball extremely well, finishing the night with 29 assists, 18 of which came from Harden alone. The true dominance of the Nets’ big three was on full display.

Although the Nets allowed 126 points, they held the Celtics to fairly average shooting splits. The big issue they ran into was fouling. Boston shot 42 free throws, knocking down 38 of them. Brooklyn had 28 fouls in Game 4, but the physicality paid off for them with a win.

The Celtics struggled to find consistent offense with both Walker and Williams sidelined. At one point, Brad Stevens was forced to play a lineup of Evan Fournier and a bunch of bench players. That allowed the Nets to really get things rolling. With Walker out, the Nets’ defense focused almost exclusively on Tatum, and it worked. He scored 40 points, but with no one else around him to help carry the load, the Celtics’ offense was doomed.

As for Boston’s defense, the big three killed them. They found no answer for Durant, Irving, or Harden all game long. Harden in particular got to the paint with no issue, as the Nets shot 15-24 (62.5%) in the restricted area. Durant and Irving shot over every defender that the Celtics sent their way. The pair combined to shoot 14-23 (60.9%) on contested jump shots in Game 4.

With their backs against the wall, Boston will need to fight tooth and nail for a victory tonight. The Nets want nothing more than to avoid playing in Boston again, especially after the water bottle incident which followed Game 4. Durant, Irving, and Harden will all be on their A-game.

Walker and Williams both remain sidelined for tonight’s contest, meaning the pressure is on Tatum once again. If the Celtics want any chance of stealing another victory, both Smart and Fournier need to be better. That being said, with the way the big three have been clicking for Brooklyn, things look bleak for the Celtics.