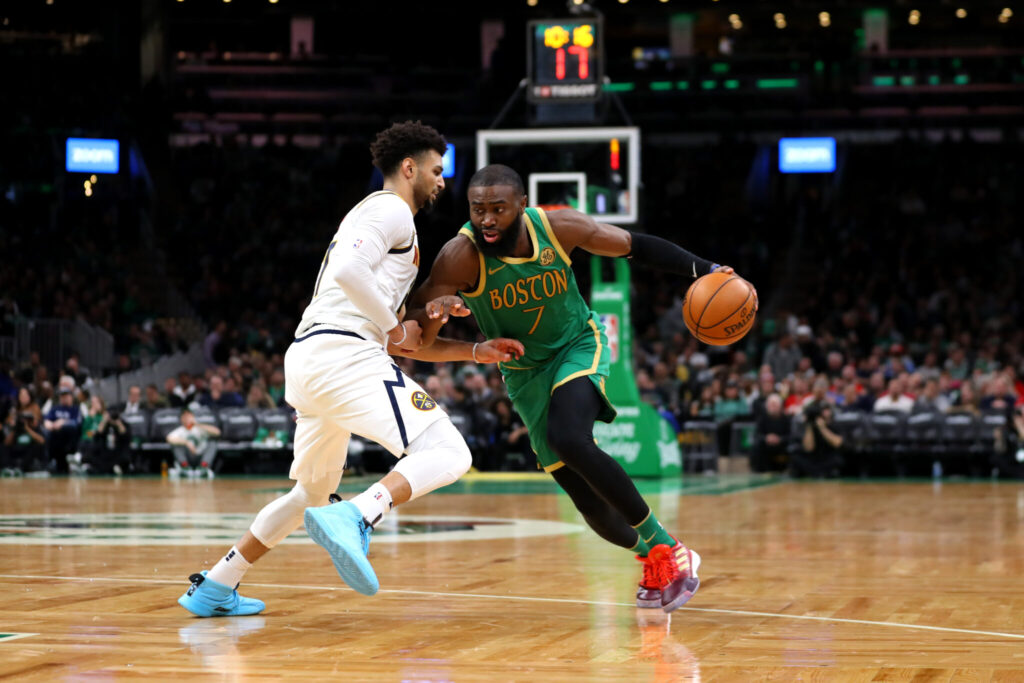 BOSTON, MASSACHUSETTS - DECEMBER 06: Jaylen Brown #7 of the Boston Celtics drives against Jamal Murray #27 of the Denver Nuggets during the second half at TD Garden on December 06, 2019 in Boston, Massachusetts. The Celtics defeat the Nuggets 108-95. (Photo by Maddie Meyer/Getty Images)
Share
Facebook Twitter Email

Daniel Theis is out after spraining his right index finger in Washington, joining Marcus Smart (calf) and Romeo Langford (wrist).

According to the online sports book Betonline.ag, the Celtics are 1.5 point favorites

The Celtics didn’t take advantage of the softer portion of their schedule, so now it’s back to difficult opponents. Denver beat Boston in three of their past four games, with Jamal Murray averaging 19.4 points per game on 51.3% shooting in eight career games against the Celtics.

Nikola Jokic carries a quiet MVP case and will face Tristan Thompson, who has struggled defensively, and Robert Williams, who rarely defends the pick-and-pop. Jokic is averaging 26.5 points, 11.5 rebounds and 8.7 assists per game on 56.4% FG.

The Nuggets are the fifth-best scoring offense and a top-10 scoring defense on a per-game basis. They shoot 48% from the field and 38% from three, but depend on slowing the pace down. If the Celtics can inch the game closer to 100 possessions, Denver allows 111 points, which ranks 16th.

Michael Porter is a porous defender despite his immense offensive potential, and Denver’s more defensive wings are injured. It’s an open question who will guard Jaylen Brown and Jayson Tatum. Rookies Facundo Campazzo, RJ Hampton and Zeke Nnaji played well in a win over the Lakers and will pick up more minutes.

This one is winnable for the Celtics, though other games have been too. It’s also critical moment for Thompson, as the Celtics mull trades that could shake up their wing and inside positions. He’s been depended on to guard players like Joel Embiid and Jokic, and so far hasn’t done a good job. The Pistons and Wizards went right at him in recent losses.

For whatever last year is worth, Thompson held Jokic to 8-of-18 shooting, 2-of-8 from three with the Cavaliers in two games. Defense, lately, hasn’t been the main issue for the Celtics.

Ball movement emerged as a curse Boston had no answer for, going at Detroit and Washington directly, getting turned away, then run at in transition. Brown and Tatum haven’t been themselves as they log heavy minutes. Kemba Walker, a silver lining, shot 9-of-18 with 25 points. He also turned the ball over five times.

Boston will lose to anyone playing any basketball reminiscent of the last two games. They’ve swayed between that and excellent showings like the Raptors win three games ago. Inconsistency has a good side too.