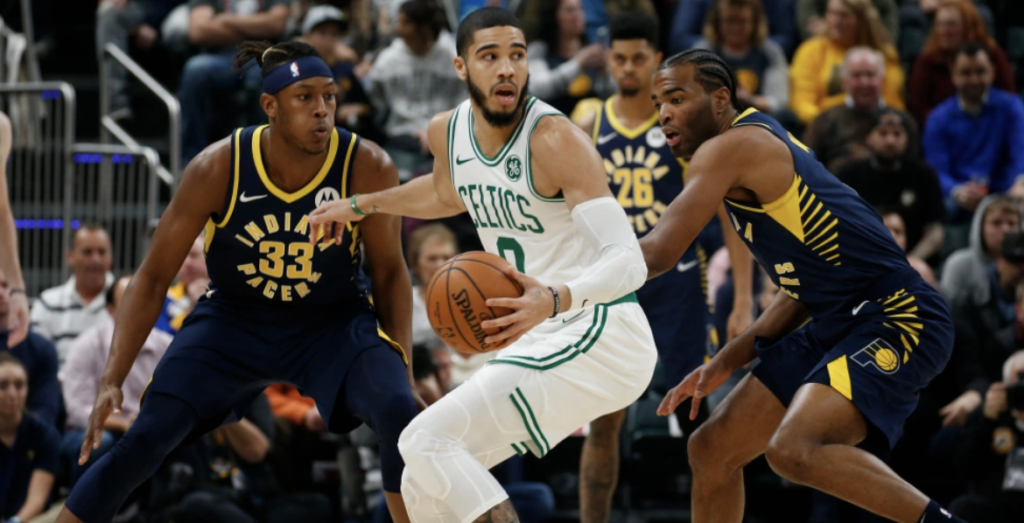 The Boston Celtics and Indiana Pacers conclude their short series tonight at 7 p.m after the Pacers took the first game, 108-107, on Sunday. Victor Oladipo returns for Indiana after a load management night, further pressuring a Celtics team that got pounded for 23 Indiana fast break points on Boston’s 18 turnovers.

According to the online sports book Betonline.ag, the Pacers are 1 point favorites. The Celtics were favorites on Sunday, diminishing them to 1-2 against the spread this season. Indiana is one of four surprising 3-0 teams remaining in the east.

The Celtics received their best chance to win in this young season when they faced the Pacers without Oladipo on Sunday. The Pacers star nursed his knee on the back half of a back-to-back, and is starting his first season healthy since 2018 after rupturing his quad midway through that season. In his first two games, he buried 7-of-10 shots from three while shooting 65% overall on 26 attempts.

Indiana will reinsert him for Aaron Holiday, who hurt the Celtics with steals and breakouts. The Pacers started Sunday’s game 9-for-11 on fast breaks, which swung a game the Celtics won otherwise. Indiana shoots the fewest threes in the NBA, but have ramped up their pace to 106.2 possessions per game, eighth in the league and nearly five above Boston’s 27th-ranked attack.

Boston appeared both uncomfortable and unable to keep up with the Pacers run-outs, particularly in the third when Malcolm Brogdon hit TJ Warren on an alley-oop to cap a 10-0 run out of halftime. The Celtics beat Nate Bjorkgren’s Raptors last postseason on elite transition defense, after finishing the season fifth in defensive rating and first in fast break points allow. To start 2020-21, Boston is tied for last in defensive rating and dead last in field goal percentage allowed.

Could a lineup change change that? Boston’s “two big” starting lineup with Daniel Theis and Tristan Thompson is allowing 123 points per 100 possessions. Brad Stevens still believes that group can defend and likes their offensive spacing despite a 98 offensive rating.

“We’ve got to get to be the best version of ourselves quick,” he said yesterday. “We have to have everything on the table.”

The formula for success likely starts with the Celtics abandoning the two-big lineup more often. Stevens initially doubted they’d use it period in training camp, then Aaron Nesmith fell out of the rotation. Wing options remain slim, with only Javonte Green, Semi Ojeleye and the struggling Grant Williams available to fill in, but none of Boston’s top-five lineups in terms of net rating feature two bigs.

It’s also time to start seeing what Nesmith can provide. Stevens signaled that could be coming, and nobody has definitively beaten him out on the wing as Grant struggles to stay with perimeter players. Adjustments tonight should swing a matchup Boston had if not for a botched Jayson Tatum final play. A point in the spread figures to matter here between two closely-matched teams.