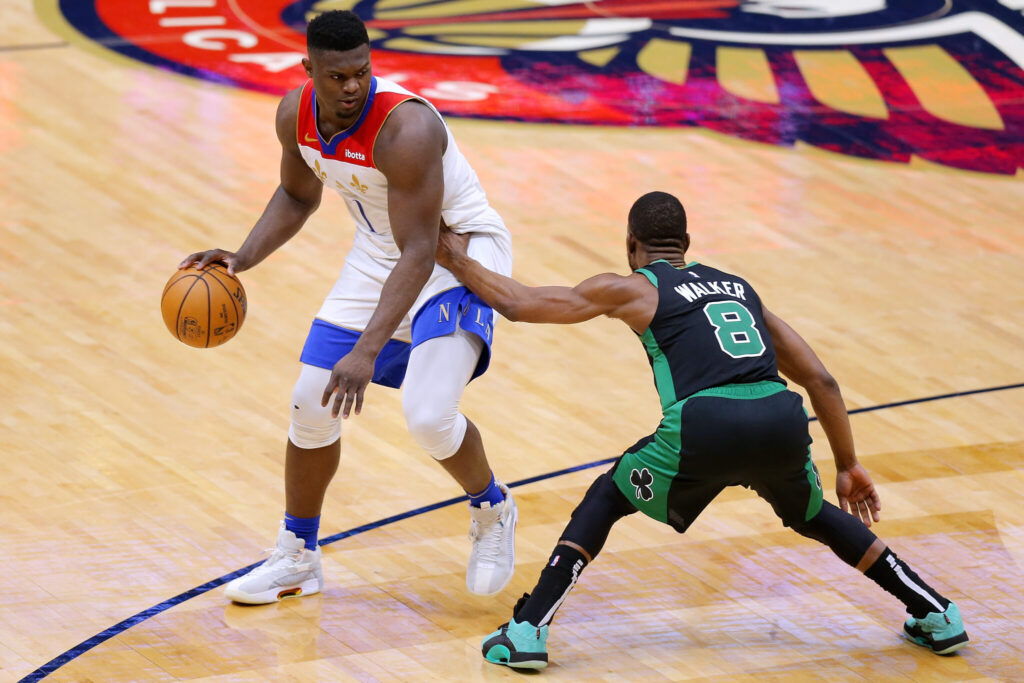 NEW ORLEANS, LOUISIANA - FEBRUARY 21: Zion Williamson #1 of the New Orleans Pelicans drives against Kemba Walker #8 of the Boston Celtics during a game at the Smoothie King Center on February 21, 2021 in New Orleans, Louisiana. NOTE TO USER: User expressly acknowledges and agrees that, by downloading and or using this Photograph, user is consenting to the terms and conditions of the Getty Images License Agreement. (Photo by Jonathan Bachman/Getty Images)
Share
Facebook Twitter Email

According to the online sports book Betonline.ag, the Celtics are 2.0 point favorites.

Evan Fournier’s arrival will be all the more welcome with Brown continuing to pile up ailments. Part of the appeal of acquiring Fournier at the trade deadline was allowing Jayson Tatum and Brown to rest for the Celtics when needed, and be able to be replaced by a playmaker rather than more limited offensive personnel like Semi Ojeleye and Grant Williams.

Fournier posted a career high 20.6 assist percentage with the Magic this season, only exceeded by Kemba Walker and Marcus Smart among current Celtics. He’ll comfortably supplement the playmaking responsibilities Brown and Tatum provide, while hitting over 40% of his pull-up threes. He posted 0.95 points per possession in the pick-and-roll (70th percentile) for the second straight season, while ranking in the 79th percentile in transition.

The Pelicans are the fifth best offense and fifth worst defense in the NBA in terms of points per game. Boston stuck with New Orleans through three quarters in February, holding the Pelicans under 30 points in each before losing the fourth 34-21 and collapsing in overtime. Robert Williams III played admirable minutes into overtime, but Zion Williamson and Brandon Ingram scored 61 points while generating 16 free throws to lead the win. Josh Hart hampered Tatum defensively throughout the second half.

New Orleans generates the third-most free throws in the NBA, over 25 per game, while the Celtics rank 18th and 27th in the month of March. Fournier will help close that gap with his 4.7 free throw attempts per game. Boston is already the better three-point shooting team of the two sides by two percentage points.

Boston will miss Thompson and Brown on Williamson, who shot 3-of-8 against the pair and was held to four points in the first half. Williams III blocked Williamson in overtime at the rim and Thompson yielded a late and-one inside that forced overtime. The Celtics have enough scoring personnel to win, but a shootout will go down to the wire again and Williams III will need to avoid foul trouble with only Grant, Mo Wagner and Luke Kornet behind him.