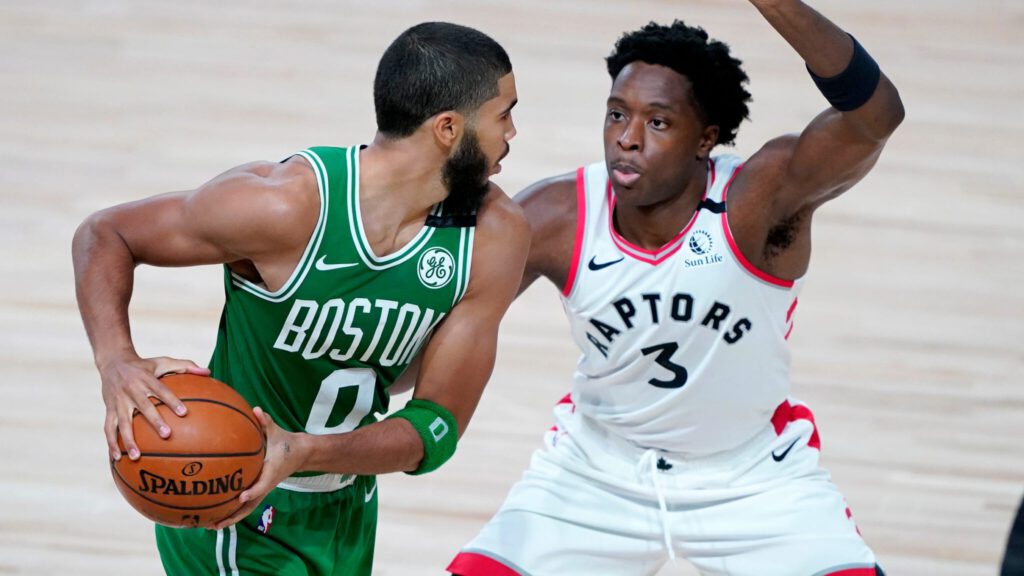 Robert Williams (left hip soreness) joined the injury report late Thursday afternoon and is out tonight. Marcus Smart (calf) and Romeo Langford (wrist) remain out, without a timetable for return.

Jaylen Brown is nursing knee tendinitis that forced him to miss two games and bothered him in the second half against the Jazz, but is active. Daniel Theis, also managing knee pain, is too.

OG Anunoby is “50-50,” according to Nick Nurse, to return from a calf injury that shelved him for eight games.

According to the online sports book Betonline.ag, the Celtics are 3.5 point favorites, their largest line as a favorite since Jan. 27 against the Spurs.

A win tonight would firmly declare the Raptors are back by moving them into a tie for the fourth seed with Boston. Toronto started 2-8 into the COVID season, with Tampa announced as their home for the rest of it today. They’ve become acclimated there, winning five of their last six games, while still adjusting to an overhauled front court. Kevin O’Connor linked them to Andre Drummond this week.

The Celtics unloaded on the Raptors offensively on Jan. 4, torching the Raptors 38-14 in the second quarter after an early deficit. Jayson Tatum scored 40 points and Fred VanVleet reached 35 on a late 6-of-9 three-point burst that rallied Toronto into the fourth.

Pascal Siakam struggled early this year and in that loss to the Celtics. In his last seven games, he averaged 25.7 points, 6.6 rebounds and 4.3 assists per game, while shooting 50.8% and 40.9% from three. The Raptors and he rode three-point shooting into the NBA’s top 10 offenses, attempting 41 per game (3rd) and drilling 39.1% (fifth).

Center is a struggle, with the Raptors’ defensive rebounding ranking in the bottom four and Aron Baynes lineups getting outscored by 13 points per 100 possessions. He’s shooting 40%, largely surpassed by the slender shooter Chris Boucher. Siakam also plays steady center minutes.

Watch Jaylen Brown’s health, first and foremost. His knee tendinitis forced him to miss two games on the road trip, and he exploded for 20 points on 7-of-10 shooting before halftime, before finishing 5-of-10 in the second with 13 points as he dealt with more discomfort. Can he continue to stall Siakam?

His inconsistency stands tallest among Toronto’s issues in losing five of eight to Boston back to their playoff series. The Celtics have slipped slightly from allowing 17.7 fast break points last year to 18.3. The Raptors, averaging 23.4 PPG, fell from 27.8 PPG, but combined with their 16.8 turnovers forced per game (1st) can break out and run if Boston gives the ball away as they occasionally have.

Boston folded against the elite Jazz shooting personnel after a strong defensive first half. The C’s rank eighth in the NBA at stopping the three (36.1%) and 27th against shots at the basket (63.9%). The Raptors rank 23rd in finishing at the rim (57.7%).

If Anunoby doesn’t play, Toronto will be hard-pressed to stop Jayson Tatum and Brown in man-to-man. The Raptors also foul often. Kemba Walker (34% FG) has dragged down Boston’s offense in 10 games since his return. Grant Williams, effective on the road trip, could play some five minutes for the first time this year with Rob out.