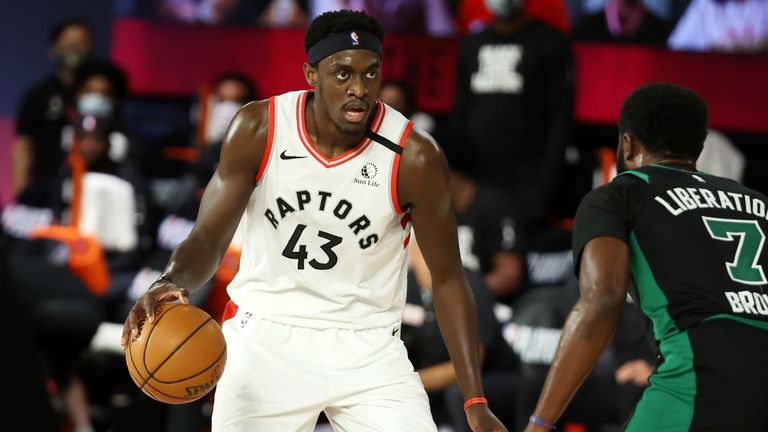 The Boston Celtics and Toronto Raptors meet at 7:30 p.m. to cap a stretch of three games in four days for the Celtics and mark the penultimate night of a four-game road trip for the C’s early this NBA season. They visit Tampa, where the Raptors will play their 2021 home games as they’ve skidded to a 1-4 start.

Nonetheless, according to the online sports book Betonline.ag, the Raptors are 4.5 point favorites due, in part, to Boston’s overnight flight from Detroit and a loaded injury list. Jeff Teague is out with a left ankle injury sustained in last night’s fourth quarter, while Marcus Smart is questionable with a right thumb sprain. Javonte Green remains out in the NBA’s health protocol. A Smart absence would mean considerable minutes for any of Carsen Edwards, Tremont Waters, Grant Williams and Semi Ojeleye.

Patrick McCaw is the lone absence for the Raptors, due to knee surgery.

Who will play for the Celtics? This one becomes a triple-trap for Boston against a team that’s historically played them hard while undermanned and on a back-to-back. Payton Pritchard would likely start if Smart sits, and fortunately for Boston has run with the other starters (11 minutes, +0 net rating).

Tremont Waters and Edwards would fill in behind him in the 20 minutes per game Teague vacates. Edwards appeared in garbage time and scored nine points on 4-for-8 shooting against the Grizzlies. He played real minutes on Friday and missed two shots while Boston’s regulars capsized in the first half against Detroit.

As for the “two big” lineup, another slow start allowing 9-for-11 Pistons shooting to start Sunday’s game opened into a successful closing effort. They carved out a -5.4 net rating and lost the fourth quarter 32-31, enough to hang on by a basket. Injuries won’t allow the team to get away from that combination anytime soon.

What’s present tonight? Jayson Tatum and Jaylen Brown scoring 52.3 points per game, leading the fourth most efficient shooting offense in the NBA. That alone will be tough for Tampa to match.

The Raptors benefit from some Boston absences, but don’t necessarily solve their own offensive woes. Tampa ranks 27th with 104.4 PPG and are bottom 10 in shooting efficiency from every area on the court, despite launching 46 threes per game.

They’ve competed defensively, ranking among the top shot-blocking teams and limiting opponents to the fourth fewest field goals per game while forcing 18 turnovers per night. Chris Boucher is a defensive revelation, bouncing back from his absence in the Celtics series last year to block 2.2 shots per game in five appearances. He and his teammates foul at a high rate though, ranking in the bottom five of free throws allow. That’ll only supplement a Boston offense that just scored 122 points with no free throws for Tatum and Brown.

Pascal Siakam remains missing in action, shooting 41.7% after a 4-for-10 night against New Orleans. Nick Nurse needed to bench him after he departed a game early against Philadelphia. Brown will defend him again, the root of his issues over his last 11 games played. Kyle Lowry, if Smart sits, will be a menace to Boston’s smaller point guards.

Toronto will noticeably miss Serge Ibaka, who torched Boston with 50% three point shooting in the playoffs. Old friend Aron Baynes is a net -11 in his place.