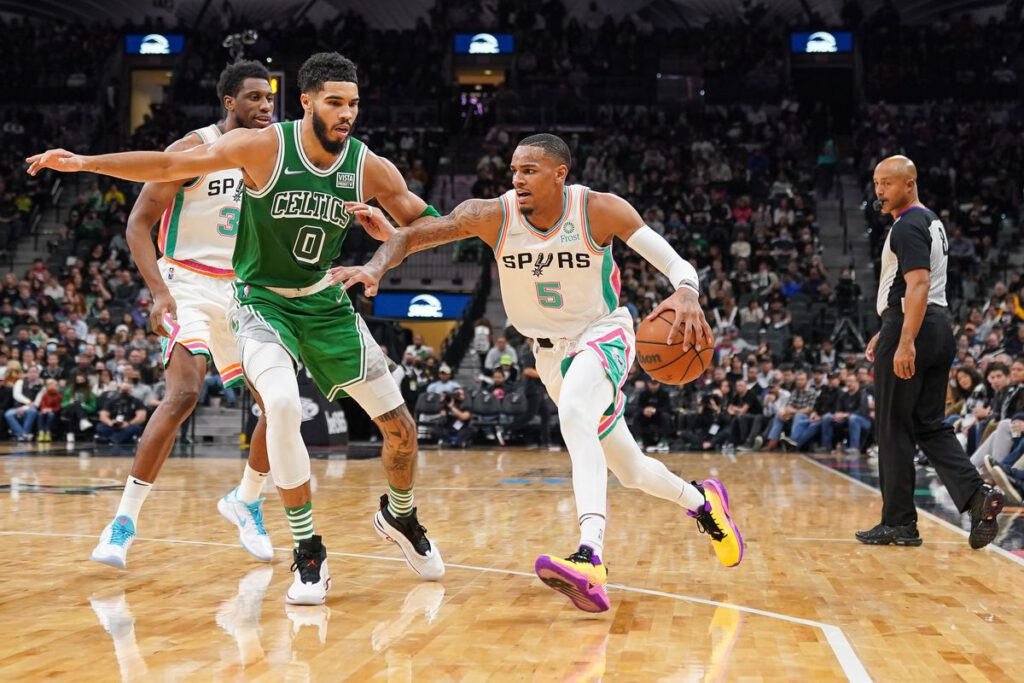 The Boston Celtics (18-19, 18-17-2 ATS) are back in action tonight as they take on the San Antonio Spurs (14-22, 20-16 ATS). After a two-day break, the C’s will be looking to build on a two-game win streak. Meanwhile, the Spurs are in the midst of a four-game losing streak and hoping to get back on track tonight.

According to the online sports book Betonline.ag, the Boston Celtics are 7.5-point favorites:

For the first time in forever, Boston’s injury report doesn’t take up more than one Tweet. Only two players will be out tonight. Payton Pritchard is out as he entered the league’s health and safety protocols today. Brodric Thomas is also out due to lower back pain.

In addition to Zach Collins, who has yet to appear in a game this season, Lonnie Walker IV, Devontae Cacock, and Doug McDermott are out due to COVID protocols. Past that, Dejounte Murray did not play in San Antonio’s game last night but is on track to make his return against the C’s.

The Celtics only have one three-game win streak this season, and a win tonight would make that number two. The first streak came with wins over the Lakers, Thunder, and Rockets earlier this season. They have a fairly easy schedule throughout the month of January, so kicking it off with three wins would be huge. A victory tonight would also get them back to .500. In doing so, they would have a foundation to build upon for the rest of the month. The Eastern Conference is still very tight-knit, so this is a huge month for the C’s.

Jayson Tatum, Aaron Nesmith, Robert Williams, and others will be making their return to the court tonight. This is the lowest number of absences the Celtics have had to deal with in a long time. With that, the regular starting lineup should be back in action. That lineup has been great this season, especially on the defensive end. It’ll be interesting to see how well they gel after not playing together for such an extended period of time.

This is especially true regarding Tatum and Brown. The duo often likes to do this thing where one plays well in the first half and one plays well in the second. Usually, it’s Brown who dominates the first half, while Tatum comes alive in the second. If they can learn to co-exist more fluidly, this C’s team would become all the more dangerous. Both need to focus on playing within the flow of the offense rather than trying to force shots up on their own.

San Antonio has been led by Murray this season, and there’s no other way around it. He’s been playing like an All-Star this year, and has a serious shot at making the team. Murray is averaging 17.8 points, 8.4 rebounds, and 8.8 assists per game while shooting 43.8 percent from the field and 34.1 percent from deep. He’s also attempting the most threes per game thus far in his career at 4.1 a night.

Outside of Murray, the Spurs are getting contributions from across the board. There are six other players averaging double-digit scoring marks. This includes Keldon Johnson, Derrick White, Jakob Poeltl, McDermott, Walker IV, and Devin Vassell. Bryn Forbes also sits right below them at 8.5 points per game.

Of them, Johnson and Poeltl are the ones to watch out for. Johnson has been a sharpshooter from deep this season. He’s shooting 43.1 percent from deep on 3.5 attempts per night. As for Poeltl, he’s been a very underrated center on the defensive end this year. He only averages 1.4 blocks, but he’s been a brick wall down low. Poeltl also grabs 8.7 rebounds a night and is constantly fighting for position in the paint. Robert Williams and Al Horford will have their work cut out for them.

The last time these two teams faced off, Boston got dominated in the first quarter. They should have this game marked on their calendars as a revenge game. Boston should aim to not only come out of the gates firing but keep that energy up for the whole game. Ime Udoka has stressed all year that the C’s need to play full games. They can’s “get bored with what made them successful.” Playing a full 48 minutes will be a key to success for the rest of the year for the Celtics.

Running the offensive effectively through Tatum and Brown is also crucial. As mentioned above, the star duo needs to focus on playing through the offense instead of trying to create the offense. Udoka has mentioned the team’s tendency to play for themselves instead of as a team. Brown’s 50-point game was a result of the offense getting him good looks. The Celtics need to continue to play like that moving forward. However, now they have two All-Star-caliber weapons to work with instead of just one.

Lastly, the Celtics have to crash the glass. There have been lots of times this season where they’ve played great defense, only for the possession to be ruined by an offensive rebound. With Poeltl in the paint for San Antonio, and Murray being an above-average rebounder, Boston has to rebound as a team. Williams and Horford can box out all they want, but if their teammates are caught ball-watching it won’t matter. Everyone on the Celtics needs to focus on grabbing rebounds tonight.

Boston has been playing good basketball lately, despite their early-game struggles against Orlando. With the team just getting back to full health, they’re in a good position to go on a run. Expect a battle tonight against the Spurs, but not one the C’s can’t win.