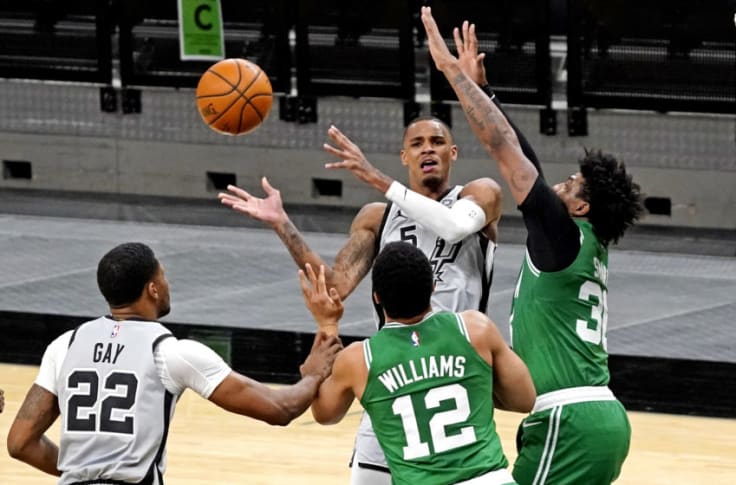 According to the online sports book Betonline.ag, the Celtics are 4.5 point favorites.

Derrick White is the most important piece missing for the Spurs. He averaged more than 15 points per game before his injury, but is now projected to miss the rest of the season with an ankle sprain. Trey Lyles (ankle) is the only other player who is questionable tonight, as he missed San Antonio’s last game vs the Heat on Wednesday.

Kemba Walker (side) will miss a third straight game for Boston. He ran off the court during the team’s loss to Charlotte and suffered a strained oblique. Robert Williams III (knee) played 17 minutes in his return on Wednesday, down from his 25 minutes as a starter to begin April.

DeMar DeRozan has been having a great season for the Spurs, with believing him to be an all-star snub. He’s averaging 21.5 points, 4.4 rebounds, and 7.2 assists. San Antonio’s young core makes up the rest of their scoring, with Dejounte Murray (15.7), Keldon Johnson (12.9), and Lonnie Walker (10.8) all averaging 10+ PPG. Veterans Patty Mills (11.4) and Rudy Gay (11.2) round out the double-digit scorers for the Spurs.

San Antonio has won three of their last four games but is only 6-4 in their last ten. They sit at 31-30 on the season which is good for ninth in the Western Conference. They won impressive games recently, including one over the red-hot Wizards and a 111-85 clubbing of the Phoenix Suns.

Jaylen Brown is averaging 32.3 points throughout Boston’s three games. Jayson Tatum (26.8 PPG in his last five) and Brown have continued to provide much of the Celtics’ scoring, with some new contributors helping. Rookie Payton Pritchard has also been tearing it up recently, scoring 14.0 points a night on 47-44-92 shooting splits over that stretch. Aaron Nesmith emerged to shoot 46.2% from behind the arc.

The C’s managed to get back in the win column in their last game, putting them at 33-30 on the year. They are tied with the Heat for sixth in the Eastern Conference but are only one game out of the five seed. Boston is 6-4 in their last ten and hoping to build up some more momentum tonight.

The Spurs rank last in the NBA in three-point attempts per game. That does not mean that the Celtics can slack off on their rotations as they have at times this past week. Guys like Patty Mills, Rudy Gay, and rookie Devin Vassell are all having killer season’s from behind the arc. While there is a little bit more room for error, the Celtics still have to keep up the defensive energy on the perimeter.

Protecting the mid-range will be more important than ever in this one. The Spurs take a league-high 19.6 two-point pull-ups a night. That’s almost two more per night than the team in second. Tristan Thompson and Robert Williams III will need to leave the paint to help defend those shots, meaning everyone else is going to have to watch the back line for cutters.

Lastly, the Celtics need to remain aggressive. They started the game vs Charlotte on Wednesday by getting to the paint on nearly every possession and it worked out well. San Antonio ranks 23rd in the league in terms of allowing points in the paint.

If Boston is able to attack early and often it should bode well for them once again.