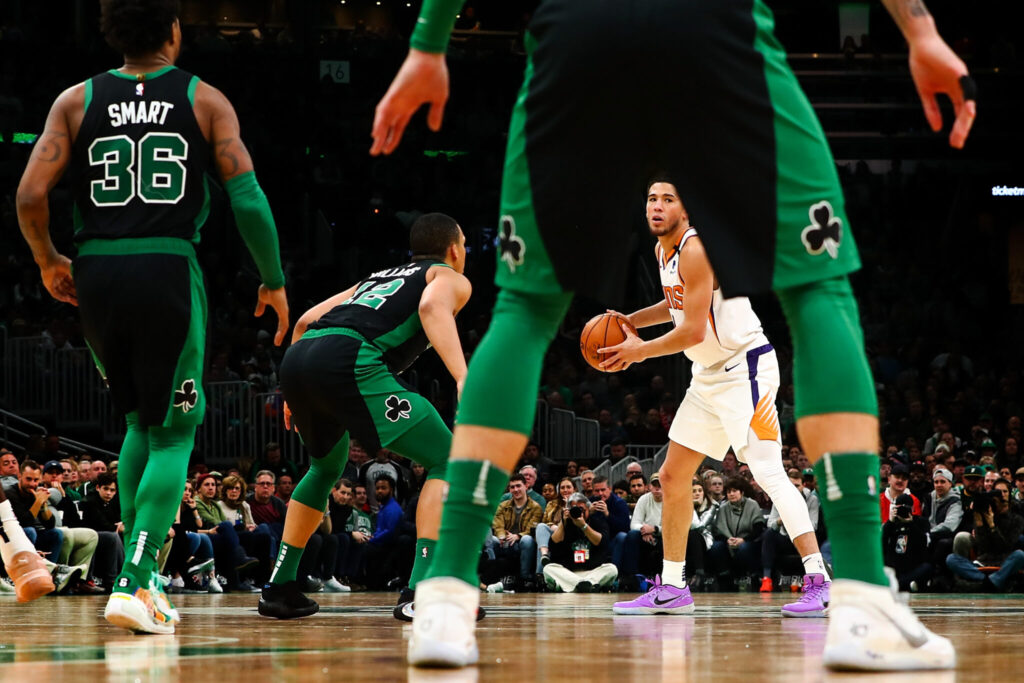 BOSTON, MA - JANUARY 18: Devin Booker #1 of the Phoenix Suns dribble the ball during a game against the Boston Celtics at TD Garden on January 18, 2020 in Boston, Massachusetts. NOTE TO USER: User expressly acknowledges and agrees that, by downloading and or using this photograph, User is consenting to the terms and conditions of the Getty Images License Agreement. (Photo by Adam Glanzman/Getty Images)
Share
Facebook Twitter Email

According to the online sports book Betonline.ag, the Suns are 1.5 point favorites.

The Suns could be without Jae Crowder (ankle) after he left yesterday’s game and did not return. Another former Celtic, Abdel Nader (knee), is out.

Boston will be without Robert Williams III (knee) for the fourth straight game. Evan Fournier (COVID protocol) is still out despite returning to the team’s facilities. Kemba Walker (illness) and Marcus Smart (illness) will return, while Jaylen Brown (left shoulder bursitis) is doubtful.

The Suns have won 50-of-66 since the beginning of the NBA Bubble, where they went 8-0, improving with the additions of Chris Paul and Jae Crowder. Monty Williams’ group boasts the sixth-ranked offense and fifth-ranked defense per 100 possessions, with the most assists in the NBA. They trail only Utah for the league’s best record and top net rating.

That’s been largely driven by Paul, an unsung MVP candidate who has helped produced a 123 offensive rating and 109 defensive rating for the Suns in his minutes. He is averaging 8.8 assists, 2.1 turnovers and 1.4 steals per game while shooting 48.7% from the field. Devin Booker leads the Phoenix scoring attack with 25.3 points per game and a 54.1% efficiency inside the arc, but he has struggled from three (34.4%).

Mikal Bridges (41.5%), Cameron Johnson (38.5%) and Crowder (38.1%) drive the team’s three-and-D production on the perimeter, while Deandre Ayton averages a double-double inside. Their lone fault is rarely reaching the free throw line (28th in attempts).

The Celtics somehow find themselves in the exact spot they did in early-February when they lost to the Suns 100-91 in Phoenix hours before the Super Bowl. Jaylen Brown is hurt, Robert Williams III is out of the picture and trade deadline addition Evan Fournier has yet to return from COVID protocol. That available depth resulted in a disastrous Carsen Edwards start, stagnant offensive attack and a disconnected defensive effort that allowed Booker to break free for 18 points and 11 assists.

Crowder also missed that game, so Phoenix opted to start Frank Kaminsky, who provided nine points and nine rebounds. If the Suns go in that direction again, Boston can start Grant Williams, who played well with 10 points in that loss. Tristan Thompson and he have combined to post a 113 offensive rating and 99 defensive rating in their 69 minutes together this month.

That unit effectively slowed the Suns to 100 points in February, but Jayson Tatum managed to shoot only 1-of-5 against Bridges. An extra scoring burden led to a 3-of-17 Tatum performance in Monday’s loss. Kemba Walker and Marcus Smart return to relieve some of that burden and Walker’s successful passing month should continue, spurring more ball movement. The question: can Boston create quality paint touches against Ayton inside? That’s what has led Phoenix’ opponents into inefficient iso-ball and losses.