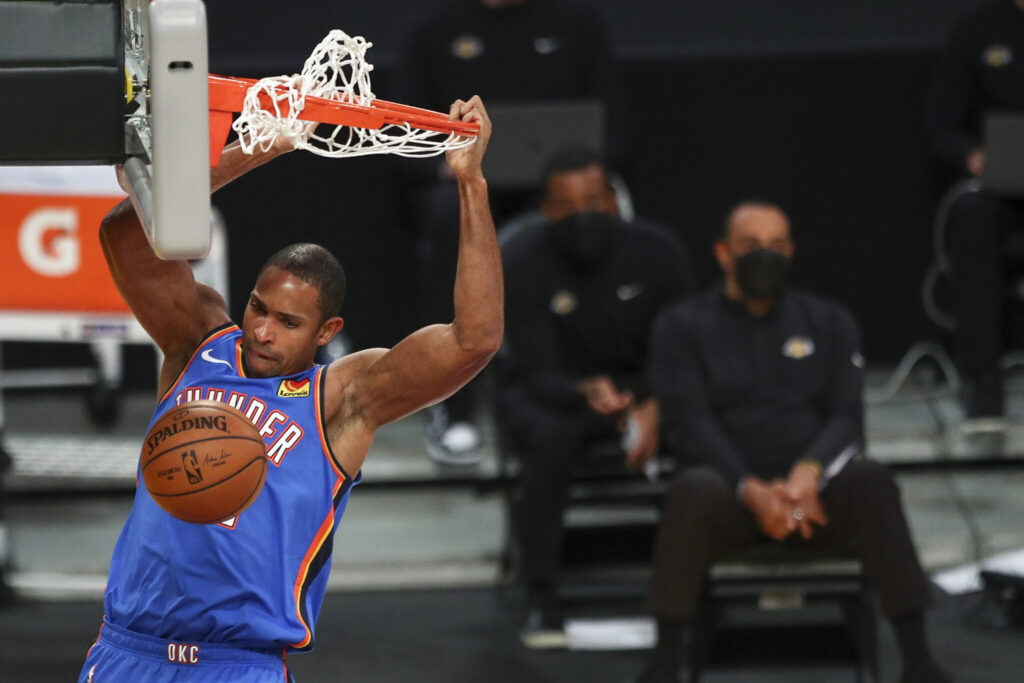 LOS ANGELES, CALIFORNIA - FEBRUARY 10: Al Horford #42 of the Oklahoma City Thunder dunks against the Los Angeles Lakers at Staples Center on February 10, 2021 in Los Angeles, California. NOTE TO USER: User expressly acknowledges and agrees that, by downloading and or using this photograph, User is consenting to the terms and conditions of the Getty Images License Agreement. (Photo by Meg Oliphant/Getty Images)
Share
Facebook Twitter Email

The Boston Celtics (22-23, 21-24 ATS) hoped to see Evan Fournier make his debut for the team against the Thunder (19-25, 23-20-1) and instead could wait as two weeks. Fournier entered COVID protocol on Saturday, lining up a shorthanded meeting for both teams at 9 EST.

According to the online sports book Betonline.ag, the Celtics are

The Celtics return to their paper-thin depth from early in the season after assuming the trade deadline cemented its rotation. Grant Williams will likely start for the first time since Feb. 7, since Fournier entered COVID protocol and Semi Ojeleye hurt his hip against the Bucks on what Brad Stevens saw as a significant running into a screen.

Boston, nonetheless, utilized the depth it had against the Bucks yesterday to deliver its best defensive performance of the season. Williams III, in his first start of the season, helped hold Milwaukee to 41% shooting inside in the first half in a wall-to-wall victory for the Celtics against a team that won eight straight. They now face a Thunder team decimated by trade deadline sales and injuries.

Oklahoma City is one of the worst offenses in the league, averaging 45% from the field and 35% from three. They’ve lost 4-of-7, allowing 110 points in six of those games. Old friend Al Horford and Luguentz Dort are hardened defenders that will make life hard for Boston scoring inside and getting Jayson Tatum clean looks. Beyond that, the Thunder appear hard-pressed to score 100 points tonight down four of their top-six scorers this season.

The Celtics will probably find their first win without Walker since January tonight. The Thunder’s path to victory involves Horford taking Robert Williams out of the game, Darius Miller, Ty Jerome and Kenrich Williams catching fire from three. Then they’ll have to shut down Tatum, who scored 34 points against Milwaukee in one of his best games of the season yesterday.

All that doesn’t appear likely, though it will be easier for Oklahoma City to key in on Jaylen Brown and Tatum’s drives, which has made Boston an easy win for opponents when Walker is out. Marcus Smart and Williams III will need to keep the ball moving offensively and allow breakouts through defensive stops. If that happens, Boston should win with ease in spite of the disappointment of Fournier’s debut getting postponed.