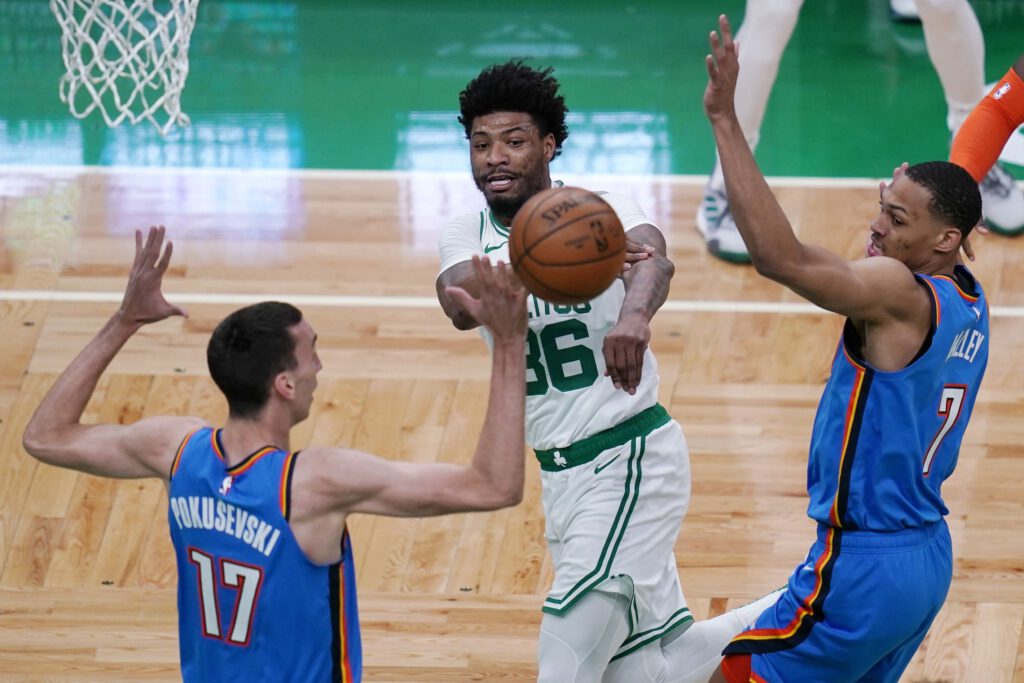 According to the online sports book Betonline.ag, the Boston Celtics are 14.5-point favorites:

Boston’s injury report is a bit lengthier ahead of their game against Oklahoma City. In addition to Aaron Nesmith (ankle), both Marcus Smart (sinus, non-COVID-related illness) and Robert Williams (knee) are out.

The Thunder have an extremely long injury report heading into their tilt against the Celtics. Seven different players are listed as out – Jeremiah Robinson-Earl, Lu Dort, Ty Jerome, Mike Muscala, Josh Giddey, Derrick Favors, and Kenrich Williams. In addition, Shai Gilgeous-Alexander is questionable.

The Celtics have absolutely dominated their West Coast swing so far. In their first three games out West, they’ve won by a combined total of 71 points – that’s an average of 23.7 points a night. And not only that, but Celtics fans have flooded almost every arena they’ve played in on the road. ‘Let’s Go Celtics’ chants were ringing throughout the arena in Denver, and Jayson Tatum was getting MVP chants on Nikola Jokic’s home court.

With their win over the Denver Nuggets, and the Philadelphia 76ers’ loss to the Toronto Raptors, the C’s still sit in fourth but are tied with the Sixers in terms of games back. Boston is also half a game behind the Milwaukee Bucks in second place and only three games back of the Miami Heat in first. The Eastern Conference standings are going to come down to the wire.

Oklahoma City has dropped their last nine games, and although they projected to be a lottery team at the start of the year, injuries have not been kind to them. They would still be toward the bottom of the standings at full strength, but when healthy, they’ve shown flashes of success. The guard tandem of Shai Gilgeous-Alexander and Josh Giddey looks great, but neither has been able to stay on the court consistently. And despite all this, they are still the 16th-best defense in the NBA (coupled with the worst offense).

As of now, the Thunder sit at 20-51 on the year, good for 14th in the NBA. Any hopes of the playoffs are long gone, but that was never in the cards for them anyways. The Thunder are in-line for a top-five pick in the NBA Draft.