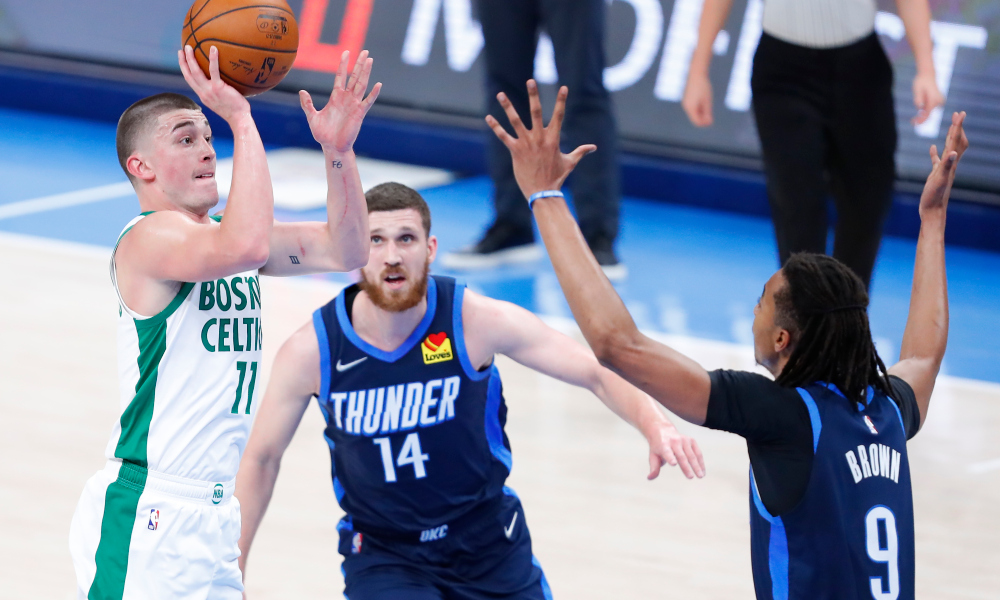 According to the online sports book Betonline.ag, the Celtics are 11.5 point favorites.

The Thunder have a long injury report entering into tonight’s game. Shai-Gilgeous Alexander (foot), Gabriel Deck, Mike Muscala (ankle), Josh Hall (knee), and Al Horford are all out for the Thunder. Tony Bradley and Dort are listed as day-to-day.

As for Boston, it’s back to multiple players missing for this one. Jayson Tatum (ankle), Kemba Walker (side) and Robert Williams III (knee) are out.

Undrafted star Luguentz Dort has led the Thunder in scoring this season and thus joined the the team’s top players this year on the bench. He played in only five of their last ten games, but averaged 26.0 points, 6.0 rebounds, and 1.8 assists in those appearances. Darius Bazley has also been shining, putting up 18.6 points, 6.9 rebounds, and 1.8 assists in his last nine games after missing Oklahoma City’s first game against Boston. Guards Ty Jerome (12.6) and Theo Maledon  (10.8) have also been scoring well for Oklahoma City over the last ten games.

Oklahoma City has dropped 14 straight games and sit at 20-41 on the season. This places them at 13th in the Western Conference.

Jayson Tatum has been doing the heavy lifting for Boston lately, averaging 28.2 points a night over the last ten games. He has also put up 9.9 rebounds and 4.6 assists a game over that stretch. Both Jaylen Brown (26.4) and Kemba Walker (20.3) have only played in seven of the last ten, but have helped out in the scoring column. Marcus Smart (16.2) rounds out Boston’s double-figure scorers over that span.

The Celtics have won 7-of-10, but have struggled recently. They are 1-3 in their last four games including bad losses to the Bulls and Hornets. Boston is 32-29 on the year, which is good for sixth in the Eastern Conference.

The C’s got killed on the glass the last time these two teams faced off. Moses Brown was an absolute menace, so that has to be a point of emphasis. Although they were able to come back in the end, never going down in the first place would definitely be ideal.

Oklahoma City is a super young team. As is the case with most young teams, they will most likely make their money in transition. If the Celtics commit a bunch of turnovers it will only make life easier for the Thunder. Taking care of the ball has to be a top priority.

Lastly, with Tatum and Walker out ball movement will be key. Jaylen Brown returns, but moving the ball will make his life easier. The Celtics need to find guys like Payton Pritchard and Grant Williams on the perimeter. Just move the ball, drive and kick, and don’t get sucked into taking bad shots.