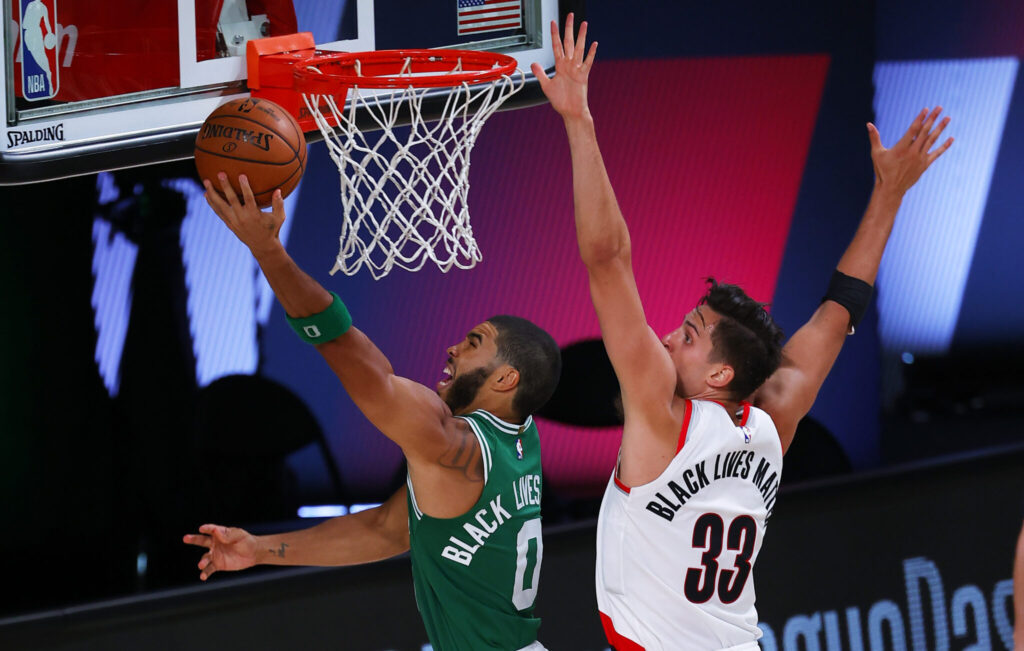 LAKE BUENA VISTA, FLORIDA - AUGUST 02: Jayson Tatum #0 of the Boston Celtics goes up for a shot against Zach Collins #33 of the Portland Trail Blazers at The Arena at ESPN Wide World Of Sports Complex on August 02, 2020 in Lake Buena Vista, Florida. NOTE TO USER: User expressly acknowledges and agrees that, by downloading and or using this photograph, User is consenting to the terms and conditions of the Getty Images License Agreement. (Photo by Mike Ehrmann/Getty Images)
Share
Facebook Twitter Email

The Boston Celtics (26-26, 24-28 ATS) visit the Portland Trail Blazers (31-22, 26-27 ATS) at 10 EST, meeting the Blazers as healthy and loaded as they’ve been all year. Boston swept the season series last season, including one of the most thrilling games of the NBA Bubble, and the Blazers enter as healthy as they have been all year.

Evan Fournier (COVID protocol) is out for Boston and Zach Collins (ankle) remains out for Portland.

According to the online sports book Betonline.ag, the Blazers are 1.0 point favorites.

The Celtics enter following their most dominant win of the season, shutting down MVP frontrunner Nikola Jokic and the Nuggets offense to three buckets and eight points in the fourth quarter on a 40-8 run. Robert Williams III blocked two shots and added a steal helping back line off of Jokic while Grant Williams fronted Jokic in the post. Boston successfully stayed home on shooters and cutters, and Denver averaged 36.4% from the field and 23.5% from three.

More importantly, the Celtics’ offense flashed a diversification of shots on offense that allowed it to overcome a 21.2% performance from three. Boston drew 23 free throws, attempted only 11 mid-rangers outside the paint and shot 16-of-22 in the restricted zone, including a perfect fourth quarter from the starters.

Eastern Conference Player of the Week Jayson Tatum is driving the offensive resurgence that’s positioned Boston fourth in net rating in the month of April. The team is stellar on the defensive end when Tristan Thompson and the bench take the floor. For the first time all year, Boston appears to be a balanced two-way force. A healthy Blazers team will test their consistency.

Portland presents a difficult matchup for the Celtics’ defense. Jusuf Nurkic is another physically-imposing center matchup for Williams III. Damian Lillard and CJ McCollum will challenge Kemba Walker and Marcus Smart all night. Old friend Enes Kanter will bang with Thompson on the boards, he hauled in 30 rebounds in a game last week, into bench rotations with Carmelo Anthony.

None of those groups will defend. The Blazers rank seventh in offensive rating and 29th in defensive rating. The Kanter-Melo combo in particular narrowly edges out a +1 net rating, while the team has a whole is 15th in the NBA at a roughly net-neutral 116 points per 100 possessions. They’ve lost 4-of-6.

Tatum averaged 35 points per game on 56.5% shooting against Portland last year. Jaylen Brown contributed 27.0 PPG on 48.6% shooting with a 131 offensive rating. Robert Covington and Norman Powell present more wing resistance than the Blazers had last year, but if the Celtics show any defensive resistance in their own right they’ll win.