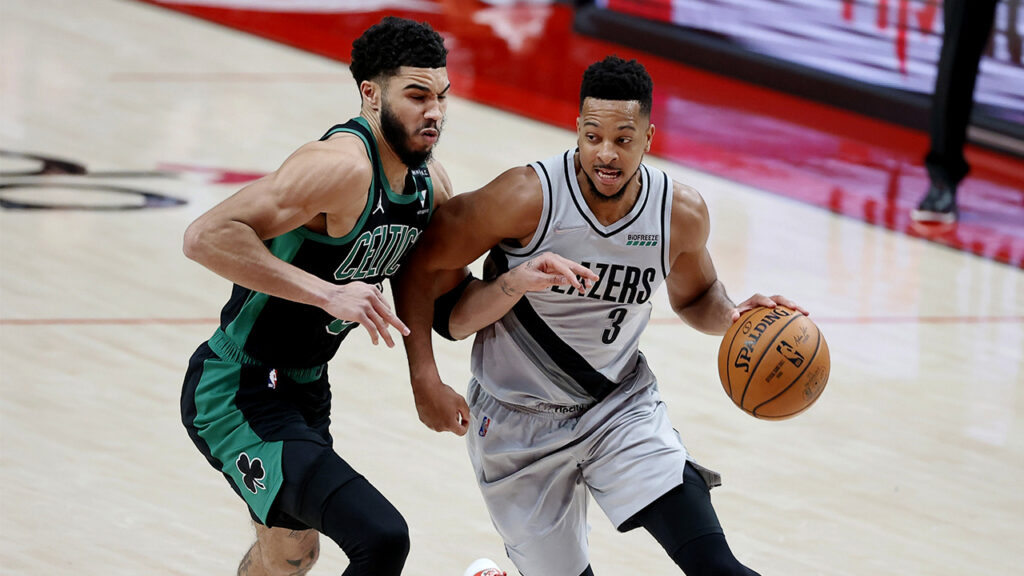 Tonight, the Boston Celtics (12-11, 12-10-1 ATS) take on the Portland Trail Blazers (11-12, 9-14 ATS) in their second game of a back-to-back. They will be looking to bounce back after a tough loss to the Utah Jazz last night. Meanwhile, Portland will be hoping to rebound after they lost by over 30 points to the San Antonio Spurs on Thursday.

According to the online sports book Betonline.ag, the Boston Celtics are 1.5 point favorites:

Jaylen Brown remains out for this game. He had a setback with his hamstring injury, so the team is being very cautious. Romeo Langford is also listed as questionable on the injury report. He sprained his right ankle in yesterday’s game against Utah and did not return to the contest. On top of that, Al Horford has also been added to the report. He will be out for tonight’s contest due to lower back stiffness.

The Celtics actually played fairly well last night against Utah but were met by a barrage of threes. In fact, Utah’s 27 threes were the most that Boston has allowed in franchise history. There was seemingly nothing that the C’s could do to stop it. It was the rare case (this season) of Boston’s offense outplaying their defense.

On a positive note, the offense did actually play well. Jayson Tatum led all scorers with 37 points, but his three-point shooting was a bit off (2-11). The Celtics had four other players with at least 10 points on the night, and Dennis Schroder even chipped in 26 of his own. They shot 35.9 percent from deep on the game, which is well above their season average, but they simply could now keep up with the Jazz.

Boston needs to work on lining up their great defense with their solid offensive nights. They can’t let the work they do on each end affect the work they do on the other. Now, the game against the Jazz may not be the best example, considering Utah was obscenely hot from range. However, even a couple of games ago against the Philadelphia 76ers, Boston was able to put in a great shift on defense, but their offense was nowhere to be found. Finding a middle ground on both ends is crucial.

For Portland, the injury bug is severely hampering them right now. Damian Lillard, Anfernee Simons, and Nassir Little are all dealing with something. That’s not the only thing affecting their organization at the moment, though. Just yesterday, the Trail Blazers cut ties with general manager Neil Olshey after a string of accusations came to light earlier this season. Olshey had been the GM since the summer of 2012. He was let go “due to violations of the Portland Trail Blazers’ code of conduct,” according to the team.

As for their on-the-court play, this year has been the same story for the Trail Blazers – a scorching hot offense but a lackluster defense. They are once again a top-ten offense in the NBA, yet still, have the second-worst defense. This is a stigma they have tried desperately to break with additions such as Robert Covington and Larry Nance Jr., however, nothing seems to work. Portland allows 110.2 points per game, which ranks 24th in the NBA.

With Lillard sidelined, CJ McCollum will have to be the main focus for the C’s. The veteran shooting guard is putting up just over 20 points per game this season on solid shooting splits of 42.6 percent from the field and 39.6 percent from deep. His usage rate will likely be way up due to the absence of Lillard. Though Marcus Smart struggled on Donovan Mitchell last night, he’ll have a chance to redeem himself against McCollum.

To take that a step further, Boston’s defense as a whole needs to bounce back tonight. Again, one could argue that the Jazz simply got hot last night, but allowing 137 points in a game is never something to be okay with. The Trail Blazers are another elite offensive team, so the C’s certainly have their work cut out for them. They may not have the same level of depth as Utah, but they definitely have guys who can score. Not having to face Lillard and Simons helps, but McCollum and Norman Powell will still come ready to play.

On the other side of things, Boston needs to take advantage of the fact that the Trail Blazers have such a poor defense. Utah is one of the better defensive teams in the NBA, yet the C’s were still able to score 130 points. There’s no reason they can’t find that same success tonight against Portland. Too many times this season, the Celtics have regressed offensively after showing signs of improvement. Keeping the ball moving and finding good shots will make their life a lot easier tonight.

With the number of injuries Portland is dealing with, the C’s should be able to secure a bounce-back win in this one. Last night’s loss against Utah should light a fire underneath them. Hopefully, they can make use of that fire.