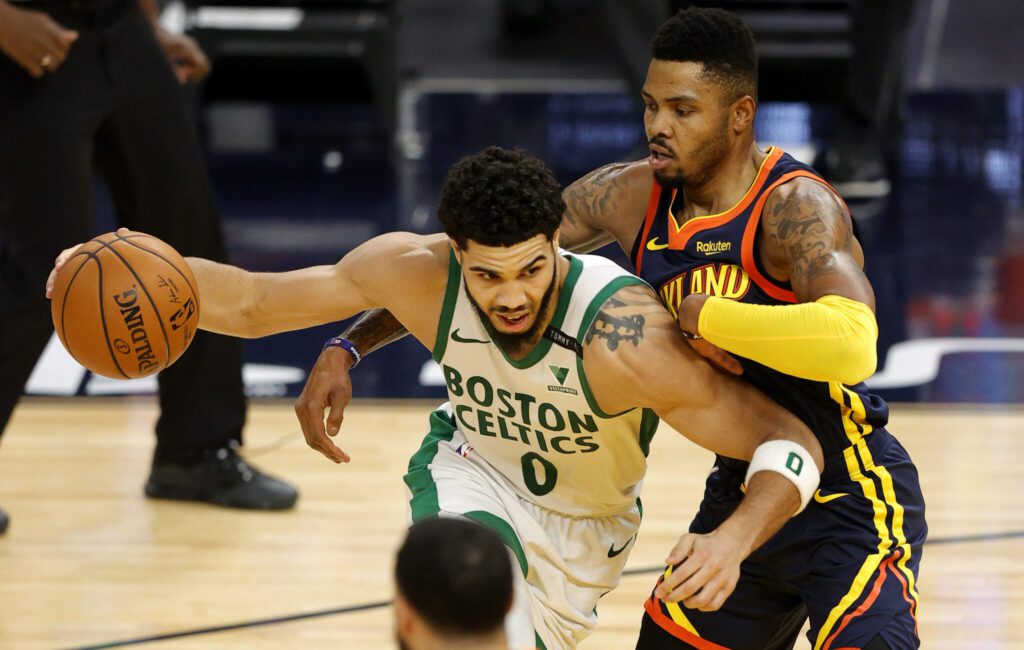 SAN FRANCISCO, CALIFORNIA - FEBRUARY 02: Jayson Tatum #0 of the Boston Celtics is guarded by Kent Bazemore #26 of the Golden State Warriors at Chase Center on February 02, 2021 in San Francisco, California. NOTE TO USER: User expressly acknowledges and agrees that, by downloading and or using this photograph, User is consenting to the terms and conditions of the Getty Images License Agreement. (Photo by Ezra Shaw/Getty Images)
Share
Facebook Twitter Email

The Boston Celtics (30-26, 27-29 ATS) return home to host the Golden State Warriors (28-28, 27-29 ATS) after sweeping their west coast trip and matching a season-best five straight wins to move into a tie for the east’s four seed.

The Warriors found out rookie James Wiseman (knee) will miss the season this week. Kelly Oubre (wrist) is questionable for tonight after missing Thursday’s win over the Cavaliers and Eric Paschall (hip) is out. Golden State has won four straight, despite mounting losses.

According to the online sports book Betonline.ag, the Celtics are 3.5 point favorites.

The Celtics have posted astounding efficiency at both ends of the floor back to the NBA Trade Deadline, winning 9-of-12. Jaylen Brown made NBA history by becoming the 17th player to shoot 85% from the field on 20+ attempts on Thursday. The offense has posted a 116.6 rating (8th) to pair with a 107.4 defensive rating (6th) in April, with the largest victory margin in the eastern conference.

Jayson Tatum remains difficult to slow, shooting 50.3% from the field, 41.2% from three and 91.3% from the free throw line on 5.8 attempts per game this month. The win over LA saw him slow to shoot 6-of-14 with no free throw attempts as the offense deferred to Brown and Tatum dished five assists. Boston’s offensive rebounding is bothering opponents (28.7%, 3rd in April) and a 65.9 assist percentage ranks fifth in the NBA this month.

Kemba Walker and Marcus Smart found their role in the picture through passing and defense. Walker is averaging over seven assists per game in a month for the first time since April, 2014; Smart is posting a 23.9 AST% as Walker’s complement.

Stop Steph Curry. That’s all the Celtics have to worry about tonight and it’s nearly impossible to execute this season. Curry is willing Golden State to wins with a league-high 39.0 PPG this month with 6.5 RPG and 4.5 APG. He’s shooting 55.6% from the field and 47.7% from three.

Walker held Curry to 1-of-5 shooting last game and will have Smart to assist in the matchup tonight. Andrew Wiggins and Jordan Poole are the only other double-figure scorers this month available with Curry if Kelly Oubre is out. With Boston’s bench posting dominating differentials with Tatum staggering into hardened defensive lineups and Grant Williams (96 defensive rating this month) able to play some five against a smaller Warriors team, Golden State is in a bad position to win tonight even given Curry’s heroics and Brown’s questionable availability.