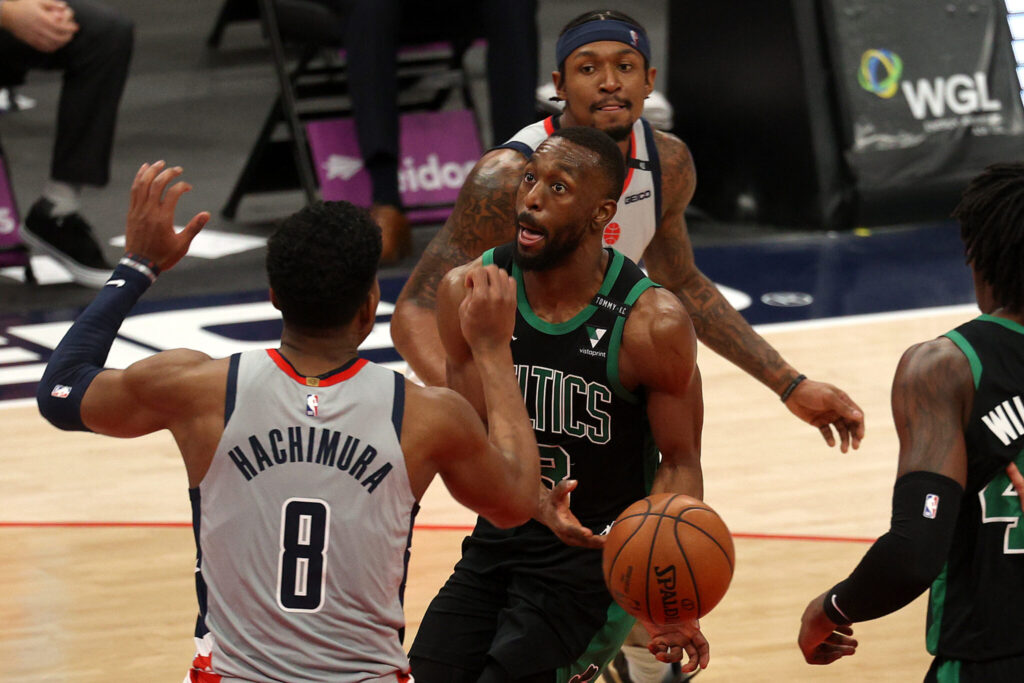 WASHINGTON, DC - FEBRUARY 14: Kemba Walker #8 of the Boston Celtics passes the ball in front of Bradley Beal #3 and Rui Hachimura #8 of the Washington Wizards in the first half at Capital One Arena on February 14, 2021 in Washington, DC. NOTE TO USER: User expressly acknowledges and agrees that, by downloading and or using this photograph, User is consenting to the terms and conditions of the Getty Images License Agreement. (Photo by Rob Carr/Getty Images)
Share
Facebook Twitter Email

The Boston Celtics (16-17, 16-17 ATS) broke their three-game losing streak and lull that stretched back to a blowout loss to the Washington Wizards (13-18, 16-15 ATS) that sparked a 7-1 stretch for Washington since. The C’s and Wizards are now stunning equals in the east playoff race and meet tonight in Boston at 7 EST.

According to the online sports book Betonline.ag, the Celtics are 6.5 point favorites.

The Celtics’ offense has helped many bottom-level defenses look capable over the last two weeks, between the Wizards, Mavericks and Pelicans. Teams Boston should’ve lit up had turnaround games, none more impressive than Washington turning its 114 defensive rating on the season into 109 (6th) over the last two weeks while the team won 7-of-8.

They’ve shut off opposing fast break points and defended the paint at a top-10 level over that stretch, while generating over eight steals per game themselves. Jayson Tatum pointed out the impact of Robin Lopez today, Mo Wagner and he effectively filling center for the missing Thomas Bryant while Garrison Matthews has become a shoo-in starter and floor spacers. That group held Boston to 36% from the field and 91 points.

It’s been a dredge offensively for the Celtics ever since, shooting bottom-three in the league from three at 32% since the loss. Tatum is struggling and Brown is managing knee pain. While Kemba Walker has reemerged as a 20 point per game scorer, his efficiency comes and goes.

Bradley Beal’s doesn’t for Washington. He’s scoring a steady 32 PPG to lead basketball for the season and the past two weeks.

Brad Stevens’ focus a week ago was slowing down the Wizards’ 114 possession pace that tops basketball. They only shot 39.8% from the field on 83 attempts for 104 points, which would seemingly be an easy winning formula for Boston and instead became a 13-point loss. The Celtics’ offense, in the weeks since, has largely been easy to stall.

Ball movement highlighted those issues before a concerted effort against the Pacers to get the rock popping. Walker entered facilitator mode while scoring 32 points for the first time in a calendar year. Brown passed effectively. Jeff Teague reemerged off the bench as a ball mover and scorer. Payton Pritchard had one of his better games since returning from a knee injury that plummeted his efficiency to 40%.

Tatum continued to struggle on both ends of the floor though, visually laboring throughout the win as he’s been a shell of himself at 40% from the field and 32% from three in 18 games since contracting COVID-19. His presence is vital as a counter to Beal and without signs he’s escaping that slump Washington should be able to stay in this game throughout. Tatum is shooting 5-of-14 and 0-of-5 from three when guarded by Beal this year (0.86 PPP).