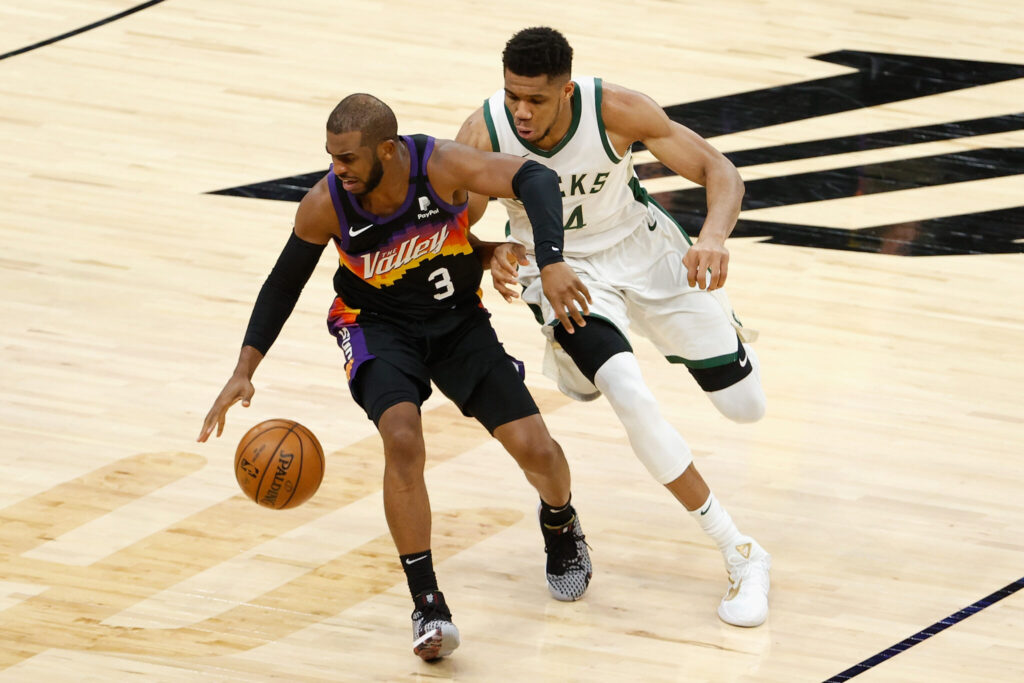 PHOENIX, ARIZONA - FEBRUARY 10: Chris Paul #3 of the Phoenix Suns handle the ball against Giannis Antetokounmpo #34 of the Milwaukee Bucks during the second half of the NBA game at Phoenix Suns Arena on February 10, 2021 in Phoenix, Arizona. The Suns defeated the Bucks 125-124. NOTE TO USER: User expressly acknowledges and agrees that, by downloading and or using this photograph, User is consenting to the terms and conditions of the Getty Images License Agreement. (Photo by Christian Petersen/Getty Images)
Share
Facebook Twitter Email

The NBA Finals return Thursday night for game two between the Milwaukee Bucks and Phoenix Suns. Phoenix leads the series 1-0 after a commanding 118-105 win in game one.

The Suns (-5) are favorites to win tonight according to Betonline.ag.

Suns forward/center Dario Saric was diagnosed with a torn ACL after Tuesday’s game 1 and is out indefinitely. He is the only player listed on the Phoenix injury report.

Despite a clean injury report from the Bucks, Giannis Antetokounmpo is still dealing with a knee injury heading into game 2.

Phoenix got a combined 81 points in game 1 from Paul, Booker, and Ayton, with Ayton bringing down 19 rebounds as well. They’ll assumably look to get Jae Crowder more involved in game 2, who shot 0-8 from the field and 0-5 from behind the arc on Tuesday.

Despite nursing a knee injury, Giannis Antetokounmpo was able to pour in 20 points and grab 17 rebounds in game 1. They’ll need more from him offensively if they want to even the series. Khris Middleton was the bread winner on Tuesday, scoring 29 points on 12-26 shooting for the Bucks.

The difference maker in game one was free throws. Milwaukee shot just 56.3% from the stripe, while the Suns shot 96.2%. If the Bucks want to stay in this series, they have to fix their free throw shooting (they’re free you know).

Milwaukee stuck around early in game 1 until Chris Paul took over and pulled the Suns away late. The Bucks will want to steal a game in Phoenix before heading home to Fiserv Forum for game 3 on Sunday night.

Prediction: Phoenix stays hot in the valley and takes a commanding 2-0 series lead over Milwaukee. Despite losing Saric for the series, the Suns still have the depth they need match an ailing Giannis Antetokounmpo.