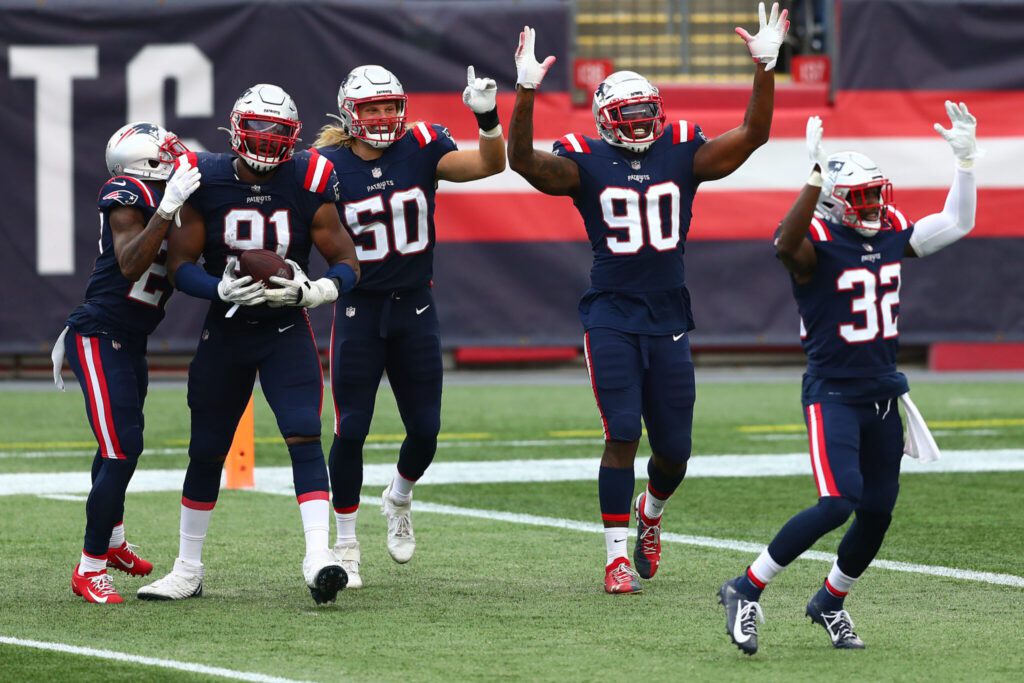 FOXBOROUGH, MASSACHUSETTS - SEPTEMBER 27: Deatrich Wise #91 of the New England Patriots celebrates with teammates after recovering a fumble in the end zone during the fourth quarter against the Las Vegas Raiders at Gillette Stadium on September 27, 2020 in Foxborough, Massachusetts. (Photo by Adam Glanzman/Getty Images)
Share
Facebook Twitter Email

After and eventful week one in the NFL, we are able get some what of a semblance of where team’s stand across the league. The Patriots took a brutal 17-16 loss to the Dolphins in a game that they should have been able to win. Quarterback Mac Jones played very well for his first start, and was essentially left out to dry by the rest of his team. Tight end Jonnu Smith lost a fumble, as did running back Damien Harris at the 11-yard line as the Patriots were going in to take the lead.

Losing this game shifted the Patriots odds across the board quite a bit. We take a look at the latest odds from BetOnline.ag:

They call it Mahomes Magic for a reason 🪄

Their odds to the the AFC representative for the Super Bowl also went down. Prior to Sunday they had 12/1 odds (+1200), and they have since moved to 16/1 (+1600). I don’t necessarily see this happening either, but 16/1 is a decent number. What I COULD see happening is them winning the AFC East…

The only AFC East team whose odds to win the division increased after this weekend is Miami. The Dolphins went from 15/4 (+375) to 5/2 (+250) to win the division. Buffalo, New England, and the Jets odds all fell. Here’s where they stand today:

After watching the Patriots on Sunday, I think they’ll stay in the race for the AFC East all year. Mac Jones is only going to improve of his performance this weekend, and the team should snap out of their mistakes and fumbles. Like I said before, this team should make the playoffs.

And if this team DOES make the playoffs, head coach Bill Belichick should be considered for the NFL Coach of the Year award. Although his odds fell from 7/1 (+700) to 12/1 (+1200) after Sunday, he is still the best coach in the sport and will always hover around the top.

After the Tom Brady saga and the Cam Newton era, coach Belichick looks to have this team right where he wants them. If he can get them to the playoffs, he should be in consideration for the award.

Rookie quarterback Mac Jones being the one positive for the Patriots on Sunday was reflected in the BetOnline.ag Rookie of the Year odds. he jumped from 4/1 (+400) odds to 7/2 (+350). He is now the odds on favorite to win the award. Prior to Sunday he was tied with Jacksonville quarterback Trevor Lawrence. Lawrence fell to 5/1 odds following Sunday’s loss to the Texans. Jones was named PFF’s Rookie of the Week for week one.

Bill Belichick did it again 👀

The Patriots will look to right their wrong’s this coming Sunday. They’ll face off against the Jets and rookie quarterback Zach Wilson at 1pm. Keep it here on CLNS Media and at CLNSMedia.com for my Patriots/Jets BetOnline.ag preview!