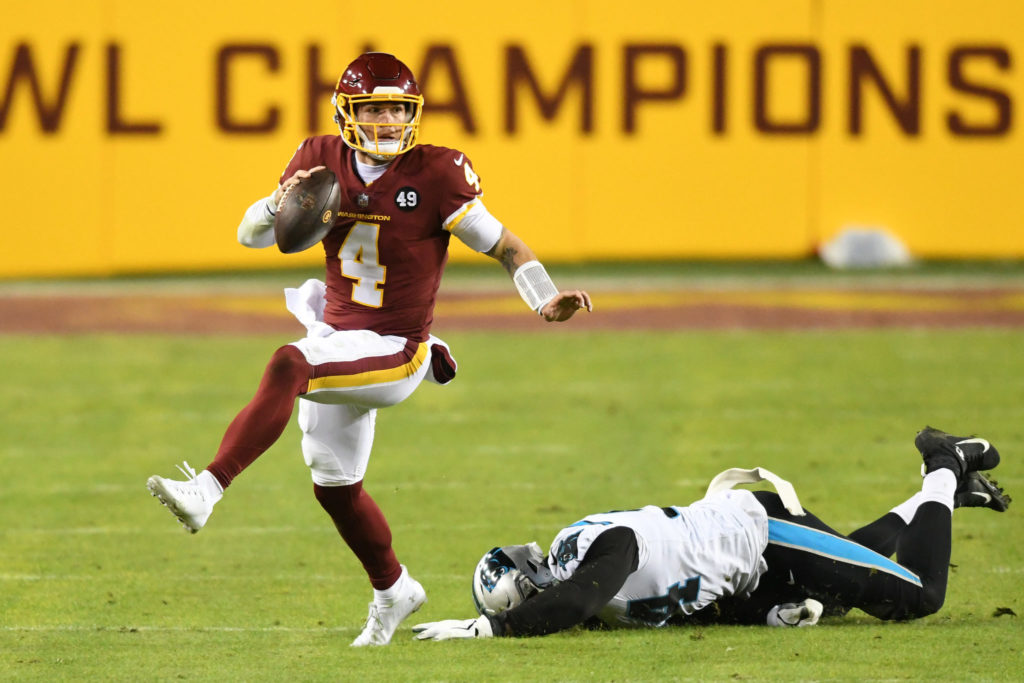 The New York Giants will travel to the nation’s capital, (or awfully close to it), on Thursday night where they’ll take on the Washington Football Team. The game will kick off at 8:20pm on NFL Network.

Let’s take a look at the gambling odds from of BetOnline.ag:

The Washington Football Team lost their starting quarterback Ryan Fitzpatrick during Sunday’s game against the LA Chargers. Fitzpatrick was ruled out with a hip injury and subsequently placed on the injured reserve.

The team will turn to Taylor Heinicke to grab the reigns as the starter. Heinicke is a journeyman back up quarterback who has made his way around the league. The 28 year old was undrafted out of Old Dominion and has played for the Vikings, Patriots, Texans, and Panthers before finding a niche in Washington. Heinicke also played for the St. Louis Battlehawks of the XFL in 2020.

Heinicke started in Washington’s lone playoff game in 2020, where he made this outstanding run for a touchdown:

TAYLOR HEINICKE SHOWS OFF HIS WHEELS FOR SIX 💨

The team lost the game, but the quarterback impressed and landed on the roster this season.

As for New York, they go into 2021 with Daniel Jones at the helm. Jones has had a sub-par career thus far, and is most likely in a “prove it” year with the Giants. He has thrown 36 touchdowns over the last three seasons, but has also turned the ball over 52 times (22 interceptions and 30 fumbles). He’ll need to clean up the mistakes if he wants to keep playing in the league.

Here is an injury report ahead of Thursday’s game from ESPN’s Adam Schefter:

As mentioned above Washington lost quarterback Ryan Fitzpatrick to a hip injury in week one. Running back Antonio Gibson was limited on Monday with a shoulder injury, but was a full participant on Tuesday and Wednesday.

Giants running back Saquon Barkley is listed as questionable for Thursday’s game. He is coming off of an ACL tear from last season. Barkley played in week one for New York, gaining just 26 yards on 10 carries. He also recorded one reception for one yard.

There’s something about Taylor Heinicke that just makes me think he’s a baller. He only has 96 career regular season pass attempts, but I think he can rally this Washington team.

With an ailing Saquon Barkley and a lackluster offensive line, always fade the Giants.