Betting On Bengals To Be The Real Thing 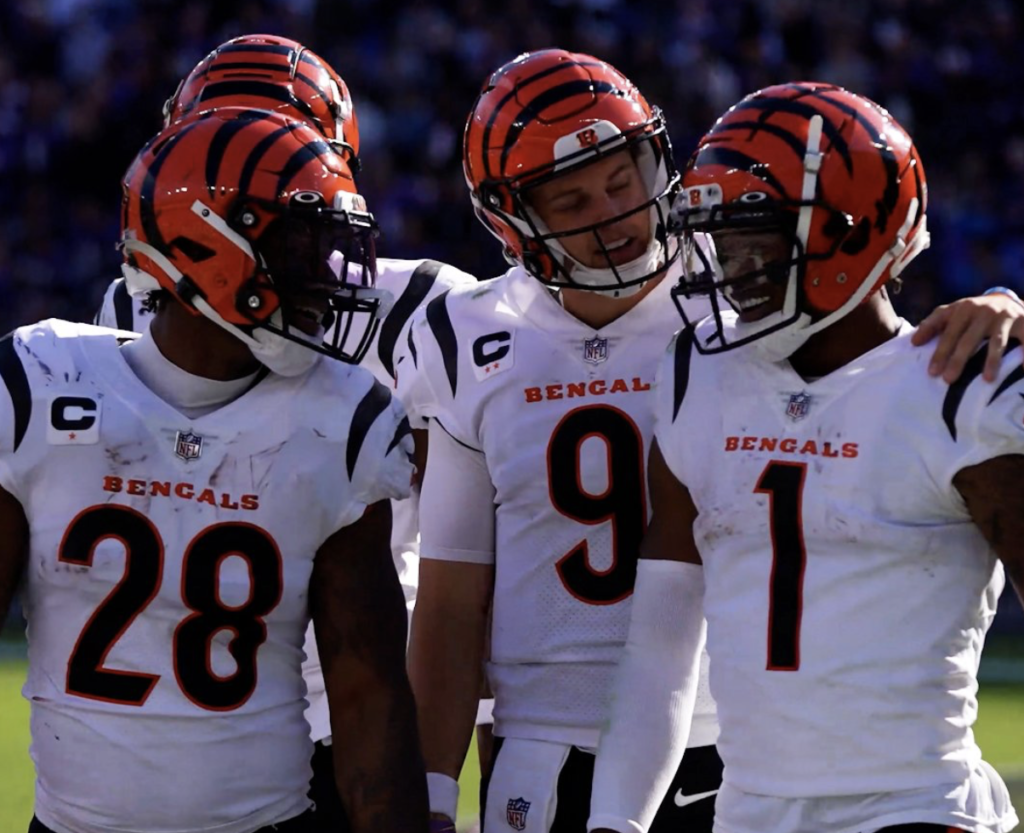 It’s the role of a prohibitive road favorite, the kind of favorite status they haven’t enjoyed in six years.

As of Friday from our friends at BetOnline.ag, the Bengals are 11-point favorites over a Jets team that is without their first-round quarterback in Zach Wilson and their No. 1 running back in Tevin Coleman. Their top receiver Corey Davis was listed Friday as doubtful with a hip injury and their top defensive player in C.J. Mosley is questionable with a hamstring injury suffered last week in New England.

Only two teams in the NFL are favored by a bigger margin this weekend. The Rams are 15.5-point favorites in Houston against the Texans and the Bills are giving the Dolphins 14 points as home favorites in Western New York.

The Rams and Bills entered the season as two teams considered as legitimate Super Bowl contenders, especially after the Rams acquired Matthew Stafford.

The Bengals? They were solid favorites as cellar dwellers in the AFC North.

Last Sunday in Baltimore changed all that. With Baltimore already spotting them on their radar, the Bengals beat down an MVP-caliber quarterback on his home turf and score 41 against a Don Martindale defense. The Bengals knew they were going to garner a lot of focus and respect, especially from Vegas.

The Jets were humiliated, 54-13, at Gillette Stadium last week and this week they are starting Mike White at quarterback. The QB out of Western Kentucky will be making his first NFL start after being drafted originally in the fifth round of the 2018 draft by Dallas.

Just two weeks ago, against the winless Lions in Detroit, the Bengals were only 3.5-point road favorites. That’s when Zac Taylor famously said, “I don’t care if we win 7-6, or 42-41, as long as we win.” Of course, they ran away in the third quarter and blew out the Lions in Detroit, 34-11.

The Bengals haven’t been this big of a favorite since Week 9 of 2015 when they were 13-point favorites over the Browns at Paul Brown Stadium. They won that Thursday night game to improve to 8-0 but lost the next week on Monday night to Houston, also at PBS.

They haven’t been this big a road favorite since Week 15 of 2015 when they were 6.5-point favorites at San Francisco. They covered with a 24-14 win.

Odds are one thing. Play on the field is another. The last two weeks, the Bengals have developed a habit that Vegas loves – closing. This, perhaps more than the Jets being shorthanded and banged up, explains why they set the Bengals at 8.5-point favorites, and it’s gone up since Wednesday.

As Taylor indicated immediately after Sunday’s win in Baltimore, “we have no right to get complacent.” The Bengals Sunday need to show they are indeed not ready to rest on their laurels.

“You have to do a good job of staying focused and not getting complacent,” Joe Burrow noted this week. “We’re in a place we haven’t been in a while. But we’re not satisfied with where we are. Keep getting better because other teams will keep getting better as well. We’ve got bigger aspirations than 5-2. Keep getting better every day, get through our reps, watch the field and keep grinding.

Burrow, with razor focus, reminded everyone that if the Bengals slip up and fall flat on their faces, no one will remember the good vibes of Baltimore.

“It was a big win for us and the team, the organization, and the city,” Burrow said. “But it doesn’t mean anything if we don’t go out there and win this week and the week after that and stack these wins and keep getting better. If we go 0-10, no one will care that we beat Baltimore in Week 7.”

"When you get them on the mat you've got to finish them off" Zac Taylor on #Bengals embracing a @ufc philosophy in finishing off games last two weeks. pic.twitter.com/YJDpCnnJCs

Bengals nose tackle Larry Ogunjobi, a dominating force so far on a rejuvenated defense, was asked this week if what’s happening in Cincinnati reminds him of the turnaround he contributed to in Cleveland.

“Definitely, as far as the turning point,” Ogunjobi said. “There’s the close games. There’s the Packers game (we) ended up losing but getting that feel that we can do it. And once you kind of break through and start winning these big games and you start to build that momentum and that’s all it takes. You have the right coaches, the right players, the right team chemistry, and that’s when it starts to build and blossom into something special. So right now it’s just keeping the main thing the main thing and staying one week at a time.”

How will the Bengals stay level-headed when national attention builds?

“You’ve just got to stay focused,” Ogunjobi added. “Football is a week-by-week league and you can’t look too far ahead. Right now, the Jets are the main focus, and that’s the biggest way you’ve got to look at it. One week at a time, stay focused. Last week is over with. Great game, whatever. It’s done with now. So now, we’ve got to focus on the Jets and find a way to win.”

The football world – and Vegas – will be watching closely.