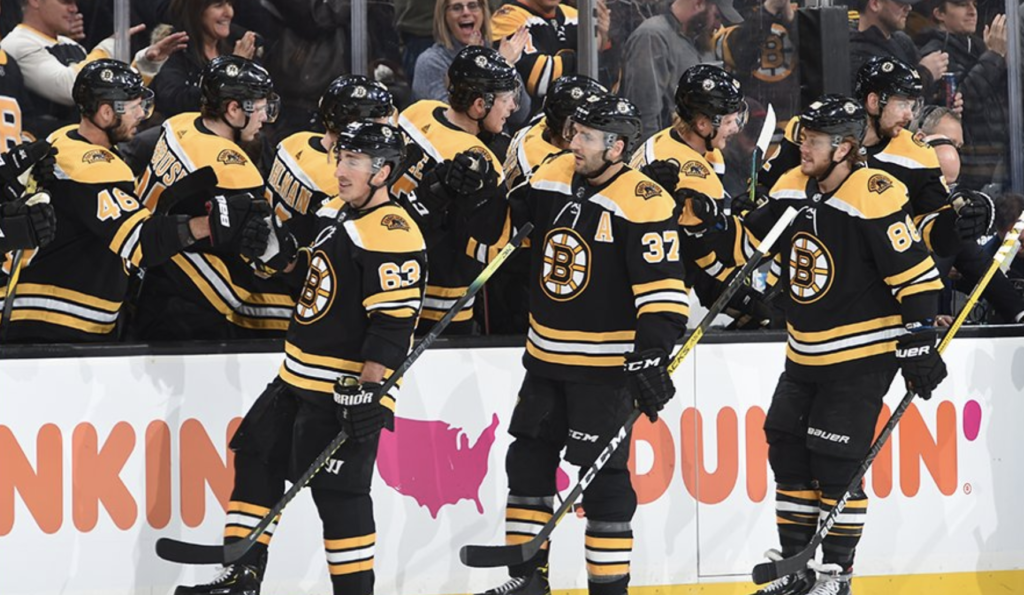 BOSTON – A little nasty can go a long way.

Just ask Bruins fans who watched Brad Marchand Wednesday night. It’s no secret fans of the Black and Gold have always appreciated a good fight. But more importantly, they appreciate fight in their best players.

They got both Wednesday night from Marchand in a classic rivalry game in front of the sellout crowd at TD Garden and the national audience. On a night when David Pastrnak netted his fourth hat trick of the season – and second against the Canadiens – in a 4-1 win, it was his feisty left winger that got him jumpstarted.

While Pastrnak was busy becoming the first player since Gordie Howe in the mid-1950s to record multiple hat tricks in a season against the Canadiens, Marchand had a trio to proud of himself, registering three assists to up his total to 49 on the season, good for fifth in the league.

“He had lots of initiative,” coach Bruce Cassidy told me. “The first goal, he did the majority of the work. Pasta went to the right place of course to finish, which he typically does. It’s like the other goal, Sean [Kuraly] did a lot of work — now, Pasta had great hands, allowed them to cut back which we’ve seen lots of. I think Marchy was dialed in today. Did a lot of things well, wanted to be a driver in the game for that line, and I thought he was.”

“A lot of our opportunities come from playing the right way,” Marchand said. “That’s kind of our motto in here. We have to play a very sound game. We take a lot of pride in the little areas. That’s what you have to do. That’s how you win playoff series and playoff games. You can play run-and-gun a bit in the regular season but that catches up to you in the playoffs.”

The Bruins are going to need to keep their edge for the next several weeks if they want to stay on top in the Eastern Conference, and a “dialed in” Marchand is just the guy for the job.

Marchand got the Pastrnak goal-scoring machine fired up Wednesday with a spectacular rush down the left wing, skating through a maze of three blue, blanc et rouge, somehow controlling the puck before getting his stick on it before Carey Price could, feeding it over to Pastrnak on the right.

Pastrnak, as he always does, calmly accepted the gift and put it past Price seven minutes into the game for a 1-0 lead.

Sure, the scoring star was Pastrnak Wednesday, but the three assists from Marchand put the Bruins in position to put away the inferior yet desperate Habs. On the third goal, Marchand started the 4-on-3 power play chance in front of Price that led to a give to Patrice Bergeron and eventually a wide-open Pastrnak on the left doorstep.

The nasty Marchand wasn’t limited to the scoresheet. He also got into with Habs defenseman Jeff Petry behind the Canadiens net with 1:12 left in the first. He took what could’ve been a costly slash but mitigated some of it with a TKO of Petry to the joy of the Bruins bench and crowd.

“There should be some chippiness,” Cassidy said. “We talked about that (Wednesday) morning. It’s good to see it. I mean, we only play them four times; that’s another reason why you lose some of the rivalry. It used to be eight times at least, so you don’t see them as much to develop that hatred. You don’t get them in a back-to-back anymore; there probably was some of those games back in the day. I liked the way we handled it.

“Start of the third, you want to make sure you’re playing the right way when it’s three to one. You don’t want to give up an early goal. So, I thought we did a lot of those things well. we had some desperation in our game to keep the puck out of the net. So, as much as Pasta was the star tonight offensively, I thought a lot of our guys deserve credit tonight for – Torey (Krug) had a huge shot block in the second period, [Zdeno Chara] at the end. Guys were really working hard, I feel, to help Tuukka out to keep it out of our net. That’s how you win.”

Marchand has been around long enough to know that if you’re going to take a penalty you at least need to make it worthwhile in terms of emotional capital. And Marchand did just that. The Bruins would kill off that penalty and then take a 2-0 lead on Pasta’s second of the night. Pastrnak back-checked the puck away from Petry, Sean Kuraly picked it up and started a 2-on-1 rush.

With the Bruins killing a Charlie McAvoy delay of game penalty with 15 minutes left in a 3-1 game, Marchand was buzzing all over the ice in the Boston zone, not stopping until he successfully secured the puck on a backcheck and headed up ice with Bergeron on a short-handed chance. It didn’t result in a big scoring chance, but it was indicative of his play on the night.

With the race in the Eastern Conference heating up (Tampa Bay entered the night just a point behind Boston), the Bruins will need all the nasty, filthy play they can muster down the stretch. Brad Marchand will no doubt be leading the charge.