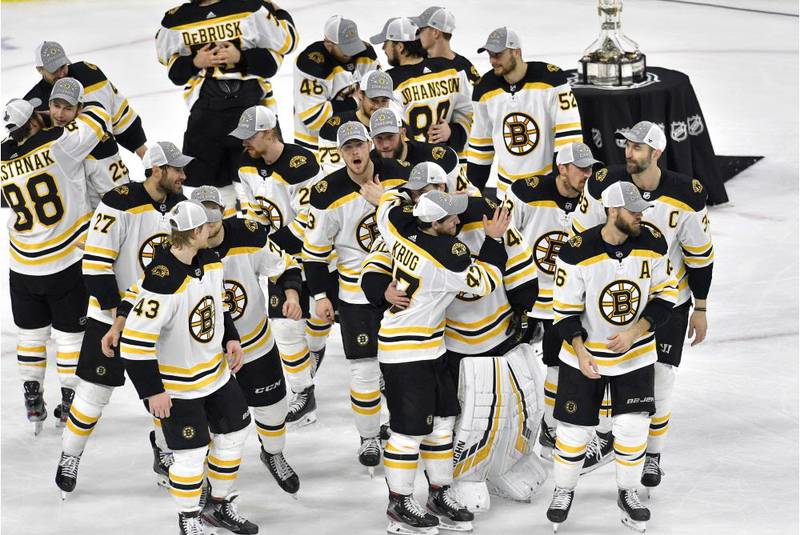 It’s been over two months since the Boston Bruins fell to the St. Louis Blues in Game 7 on home ice in the Stanley Cup Final. The sting is still fresh but a new season is right around the corner, as training camp begins in less than 30 days.

There are a lot of questions facing the 2019-20 Bruins and rightfully so — the team still has two of its best, young d-men unsigned, holes in multiple positions, and last June’s Game 7 dud hanging over their heads.

It’s fully expected that the B’s will be good but these questions must be answered at some point for the team to be really good.

Will there be a Stanley Cup (loss) hangover?

The craziest stat of last year was that the Bruins played a total of 106 games. All those games coupled with a shortened offseason coupled with a tough October could make for a very, very slow start.

They begin on the road in Dallas, Arizona, Vegas, and Colorado to kick off the first four games. Then they come home for games against a revamped New Jersey Devils team, the Anaheim Ducks (yeah, I know), and the Tampa Bay Lightning. Then there’s a home-and-home with the Toronto Maple Leafs and a Stanley Cup rematch with the St. Louis Blues in Boston.

See what I mean?

Not to bog you down with facts you could easily look up, but that’s a really tough stretch to begin the season. The 2013-14 Bruins winning the President’s Trophy after the 2013 Cup loss is an unfair comparison — the lockout shortened 2012-13 season saw the B’s play 48 regular season games and an extra 22 in the postseason. That’s a total of 70 games, which isn’t even an entire regular season.

It’s entirely possible, maybe even expected, that the B’s struggle through October.

When will McAvoy & Carlo get their new deals?

Here’s some new information you probably weren’t aware of: the Bruins are tight against the cap. Did you know that Charlie McAvoy and Brandon Carlo are both restricted free agents? Did you know that with the Bruins only having a little more than $7 million in cap space, they’ll have to figure out a way to shed salary?

It’s been the (only) story of the offseason. It’s all anybody cares about, and rightfully so — if Don Sweeney and the B’s mess this up, it’s a move that will impact the franchise for much of the next decade.

What are the biggest Bruins disappointments of the past decade? @Marisa_Ingemi & @emarinofsky debate.

There hasn’t been much news lately on either fronts, but it’s hard to imagine Carlo and McAvoy not signed, sealed, and delivered by the beginning of the regular season.

With very limited cap room, the smart move would be to lock Carlo up long-term somewhere in the $4-5 million range and give McAvoy a bridge deal in the $5-6 million range. The other option is signing McAvoy to his long-term, big-payday deal that would net him somewhere in the ballpark of $7-8 million. But with limited cap space and another Bruins defenseman lined up for a big payday, the bridge deal for McAvoy is the smartest move.

Let’s chat about that other Bruins defenseman in line for a lot of money.

How big of a storyline will Torey Krug needing a new deal be?

Torey Krug is slated to be an unrestricted free agent after the 2019-20 season and the questions started at breakup day back in June. Krug has expressed that he wants to be in Boston. What it really comes down to is that pesky problem mentioned in the previous question.

What about that salary cap?

If and when the B’s successfully re-sign Carlo and McAvoy to new deals, they’ll be even tighter against the cap. Along with Krug, other notables also due for new deals after next season will be Charlie Coyle (UFA) and Jake DeBrusk (RFA).

Krug has rightfully earned a big payday and will most likely be asking for one. The ideal time for his new deal would come during the 2019-20 season, though it probably won’t come until after the two young blue-liners get theirs.

The big source of hope the Bruins have when it comes to Don Sweeney re-signing Carlo, McAvoy, and Krug is that he’s been very good at bringing back his own guys on team-friendly deals. To go three-for-three on this one is near impossible but if there’s any GM who can do it, it’s Sweeney.

How will 42-year-old Chara hold up?

It often gets overlooked, but Zdeno Chara’s ability to stay out in front of age has been one of the most impressive things done by a Bruin over the past 20 years. He still plays top pairing minutes and is still able to successfully shut down the other team’s top talent.

But with last year’s very heavy workload, one has to keep an eye on Chara. Some say he’s gotten slower and though that usually comes with age, he’s never been fast — it’s always been his long reach that’s his most effective on-ice attribute.

That isn’t something that goes with age.

Carlo began drawing those top pairing minutes during last year’s Cup run and with his emergence as the team’s shutdown d-man of the future, it’s expected that he snags a few of Chara’s minutes during the regular season to keep the veteran fresh down the stretch.

A reasonable expectation from Chara is that he takes most of his draws in the defensive zone and on the penalty kill, while earning a solid amount of minutes against the other team’s top line. It’ll just be less than in the past.

Who will be on Krejci’s right side?

This question has been going on since the dawn of man. The year will be 2047 and Bruins writers will still be asking it: who will be the right wing on David Krejci’s line?

The B’s thought they had the answer in 2018 with Rick Nash. That plan vanished after Nash’s career was cut short due to concussions. There was a tiny glimmer of hope that David Backes would be the answer during last year’s playoffs. Aside from a few instances, that hope was smashed.

Now it’s 2019 and after trying various options with Krejci and DeBrusk, the answer still isn’t clear. A lot of signs point toward starting Karson Kuhlman on the second line, but that’s far from a definite. In 11 regular season games last year, Kuhlman amassed three goals and five points. Through eight playoff games, Kuhlman scored one goal and three points.

Another option the Bruins could put next to Krejci is Coyle. The Weymouth native is projected to be the team’s third line center, but a promotion to Krejci’s right side would electrify second line production. If Coyle were to move up, the Bruins would be freed to put Jack Studnicka or another prospect as the third line center.

One of the greatest revelations of last year’s Bruins team was that the two-goalie system works like a charm. Jaroslav Halak playing as strong as he did throughout the regular season allowed management to rest Tuukka Rask and save his best for the playoffs.

Along with this great revelation comes one of the greatest misconceptions regarding the Bruins right now. As everyone prepares for Rask and Halak to share the net once again, a simple question is being missed: why are we so sure that Halak returns to form?

The 34-year-old isn’t getting any younger. Halak has been known to be inconsistent from year to year. Prior to last season, Halak didn’t have a save percentage above .920 since the 2013-14 season.

Along with that, Halak was so good last year that it’s hard to imagine him repeating a performance that spectacular. According to Natural Stat Trick, he ranked sixth among all goalies in goals saved above average at 14.56. He had a better goals against average and save percentage than Rask.

The Bruins will be set in net if Halak can replicate even 75% of what he did last year. Nonetheless, it’s still a huge question mark.