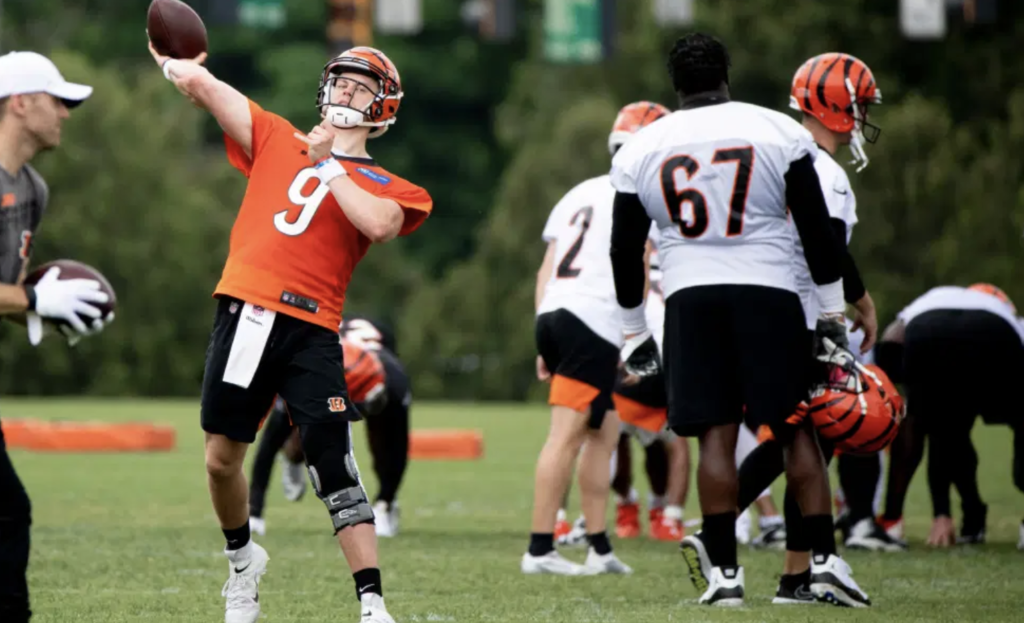 CINCINNATI — Every team has questions they want answers to over the final week of preseason and heading into the extra week to get ready for the season opener in the second weekend of September.

The Bengals questions are really starting to take shape, and that’s not a bad thing, as long as there’s a ready plan to address each one.

With all due respect to the ongoing concern over the rotations at right and left guard, putting Joe Burrow and his reconstructed left knee in a meaningless preseason game just to get him comfortable remains the biggest question. The arguments are certainly there on both sides. Carson Palmer suffered his ACL tear on Jan. 8, 2006 against the Steelers and was on the field for the third preseason game less than seven and a half months later on Aug. 28. Tom Brady, coming off his ACL tear in Sept. 2008, played in the third preseason game of 2009 to get ready and he posted one of the best statistical seasons of his career. Burrow’s had a month and a half longer to rehab than Palmer and two months less than Brady. Both put up impressive numbers and both said the preseason action helped them shake off the rust. The Brown family understandably has always handled its business conservatively, rarely exposing an asset to needless exposure. There is no bigger asset in the organization than No. 9.

“Nothing to see from them,” Zac Taylor told me on Sunday. “They’ve shown us enough to know that they’re gonna be ready to play. it’s just a matter of what do we wanna do? Do we want to put those guys out there in this game in a preseason game or just give them more rest and get them ready for the Minnesota game? We’ll take a couple more days before we make that decision since we’ve got a week here before that game. But again, they’ve shown me everything on their end that they’re capable and ready to go. It’s just up to coaches to make that decision.”

How many voices will be included in that decision?

“We talk to those who have voice in the building. That’s me, that’s everybody who’s involved, Duke (Tobin), ownership and we make the right decisions. But ultimately it’ll be me to decide who goes out there and who doesn’t and we’ll take a lot into account.”

The smart money is on veteran Xavier Su’a-Filo in his second year with the Bengals. D’Ante Smith is a rookie who has clearly shown promise and Taylor has said is the leading candidate to be the swing guard on the line. Michael Jordan has shown glimpses of significant improvement but it’s all about consistency and if that’s really what they’re looking for, Su’a-Filo is probably the best bet at the start of the season. One more thing to keep in mind, as it relates to interior line play, is who is going to give the Bengals the best chance to keep Burrow upright as opposed to sheer athleticism to get out on the edge and pull in Frank Pollack’s wide zone schemes in run blocking. And if Burrow plays, do the Bengals want to get Trey Hopkins out on the field with him at center? Those decisions again are critical to how they approach Miami.

Way too much time has been spent this week on the drops of a first-round rookie receiver who didn’t even have this issue when he last played for LSU in 2019. Yep, they did not look good in practice last week and in the game at Washington. But Chase bounced back on Sunday and then on Monday, showed off powerful hands in the back of the end zone on a dart from Burrow. This, combined with the words of encouragement from Tyler Boyd and Tee Higgins (who related his own struggles in college), is a full indication that the Bengals believe this is a one-time thing.

This could be another reason to get Burrow on the field Sunday against Miami. If Burrow can feed his old running mate at LSU, it could go a long way in building the confidence of both.

Even with Chase on the roster, there’s probably no rookie on the roster that figured to have as big an impact as Ossai. The rookie out of Texas was ready to step in and be a true impact edge, with the ability to blow up the guy in front of him and set the edge in the run game, in other words, a three-down player. With Ossai reportedly likely out for the rest of the season with a knee injury, the Bengals and Lou Anarumo are likely going to have to mix and match on the right edge with a pure pass rusher in Darius Hodge and another rookie in Cam Sample behind the two projected starters of Sam Hubbard and Trey Hendrickson. Where this hurts is what Anarumo can disguise on first and second down. On clear third down passing situations, you won’t need to protect as much against the run and they are more likely to turn Hodge loose with Hubbard and Hendrickson.