Bill Belichick Hints This Draft Could Be Much Different For Patriots 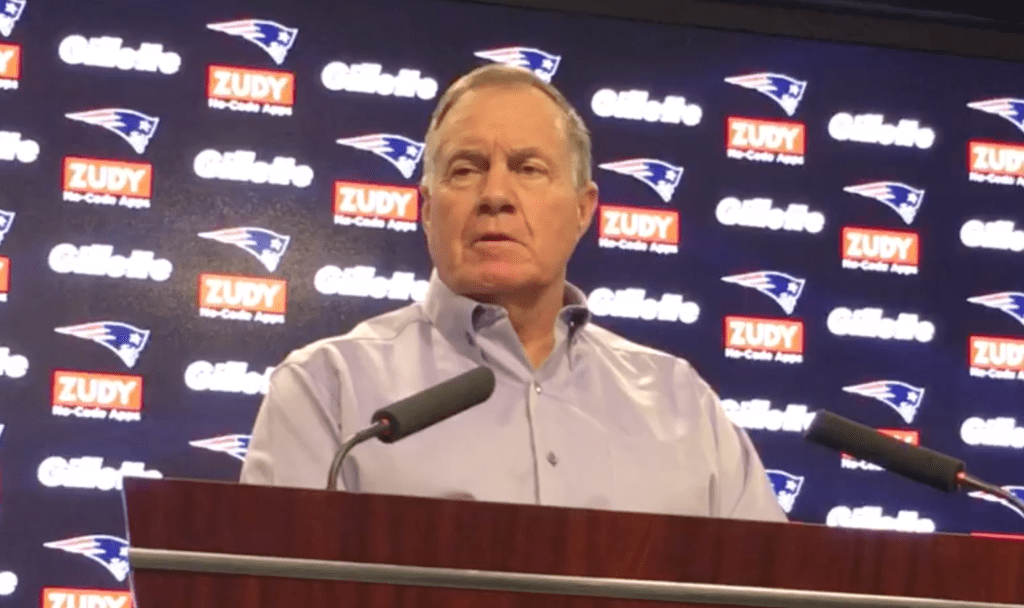 FOXBORO — Buried in the midst of a 7-minute monologue to open his Friday pre-draft press conference Bill Belichick hinted that the Patriots just might be in a position to do something different at the end of April.

“It’s a constantly evolving situation,” Belichick said. “In the end, we give each player a value based on what we think he can do for us. And then we ultimately do the best we can to improve the football team with the opportunities that we have. This year is a little bit different than the last couple years.

“Going into those past two drafts, I would say we were able to eliminate a number of players just based on where we were selecting. This year is a little bit different than that, but we really need to know the draft from top to bottom and potentially – I’d say there’s a handful of players that are probably out of reach – but realistically, just about everybody’s in play, other than a handful of guys.”

Certainly, Belichick knows they’re not intending on moving up to Saquon Barkley, Bradley Chubb, Josh Rosen, Josh Allen or Sam Darnold territory. But Mason Rudolph, Rashaan Evans, Denzel Ward or anyone else projected No. 10 or later, who knows? The interesting news here is they’re all in play. There have been rumblings (including Tom Brady to Deion Sanders on Instagram from Qatar) about Lamar Jackson and how much of “a beast” he would be in Foxboro.

“Yeah, look, in the draft process I’d look at it like a jigsaw puzzle,” Belichick told me. “It’s got like 100 pieces. Each piece has a little bit of a fit, but in the end there are a lot of pieces. You have all of the factors that come with the player, a lot of other circumstances, other opinions. There’s medical opinions, his ability as a teammate, leadership, work ethic, strength, quickness, level of improvement, rate of improvement, rate of decline, injury factors, versatility.

“How much has he done? How much could he do? Maybe he hasn’t been asked to do it. There’s a thousand things that go into it, so you try to put it all together and figure it out. It’s hard. That’s why it’s a pretty imperfect process, but you do the best you can. I think this year, probably as we saw last year, somewhere between a half and two-thirds of the players in the first two round will be underclassmen. It’s just less information on those guys. Every team in the league is working with the same information, but it’s just less.”

To review, the Patriots hold a pair of picks in both the first and second rounds and their options are plentiful. They currently sit at No. 23 (Brandin Cooks trade), 31, 43 and 63.

Will they move up to do something bold like draft a quarterback in the first round? Probably not. Will they package one of the picks, move down and collect an addition pick of value? Perhaps. But whatever the plan, Belichick – as usual – wasn’t about to divulge specifics. Could they find a partner to move up and take a player they regard highly? Maybe.

But please do not think that Belichick and Nick Caserio see a potential need in the secondary or offensive line and draft to that need early in the draft just to fill the hole.

“The whole draft need thing is – I don’t really understand that,” Belichick said. “You put a card up on the board. That doesn’t mean the guy is a good player. I think it’s important to acquire good players wherever they are. If you take a player at a position that you might so called “need” but he’s not good enough to fill that need, then it’s a wasted pick. So, I don’t understand the whole need thing. I understand player value, and that’s what we try to go by.”

BELICHICK: Most of the board “still in play” this draft vs previous years. pic.twitter.com/rpkweiPKKC

Value and production has always been Job No. 1 when it comes to projecting college talent. This year, Belichick suggested they might be willing to move a bit more in the draft to find that value and fit.

“That’s a little bit different than what it’s been,” Belichick said Friday. “It doesn’t change our process any; it just changes, I would say, the level of work that we do on some players that could be a factor that in other years, similar players, we scouted them but we really had no opportunity to draft them. But in the end, you can’t manufacture players. You can’t manufacture a guy. It’s a name on the board right now and until that player gets on the field and performs, then we never really know for sure what that’s going to be.”

Just two hours before Dez Bryant was reportedly being released by the Cowboys, Belichick spoke about how much the landscape of the NFL draft can change in just days. He was specifically talking about the three-day NFL annual selection at the end of April in Dallas but he might as well have been talking roster building in general around the team.

“Really the time to evaluate the draft is a couple years afterwards, but we don’t have that viewpoint right now, so we’ll put it together and figure it out the best that we can, do what’s best for the team, whatever that is.”

Then Belichick touched on the timing and reality of the NFL offseason, reminding everyone that a long time still remains between now and when the first games are played.

“So, the preseason schedule was released and I noticed on that schedule that there are no games in May or June or July. Preseason games are in August, so it doesn’t look like the regular season is going to start until September this year,” Belichick said in his best deadpan humorous tone. “So, that’s four months of team building. There will be other player acquisitions and deletions, I’m sure, after the draft, as there always are with our team and every other team in the league. This is one piece of the puzzle, it’s one part of the process, but there are no games scheduled in May.”

But there are three very important days at the end of April that will go a long way to defining his final stretch as head coach in New England.