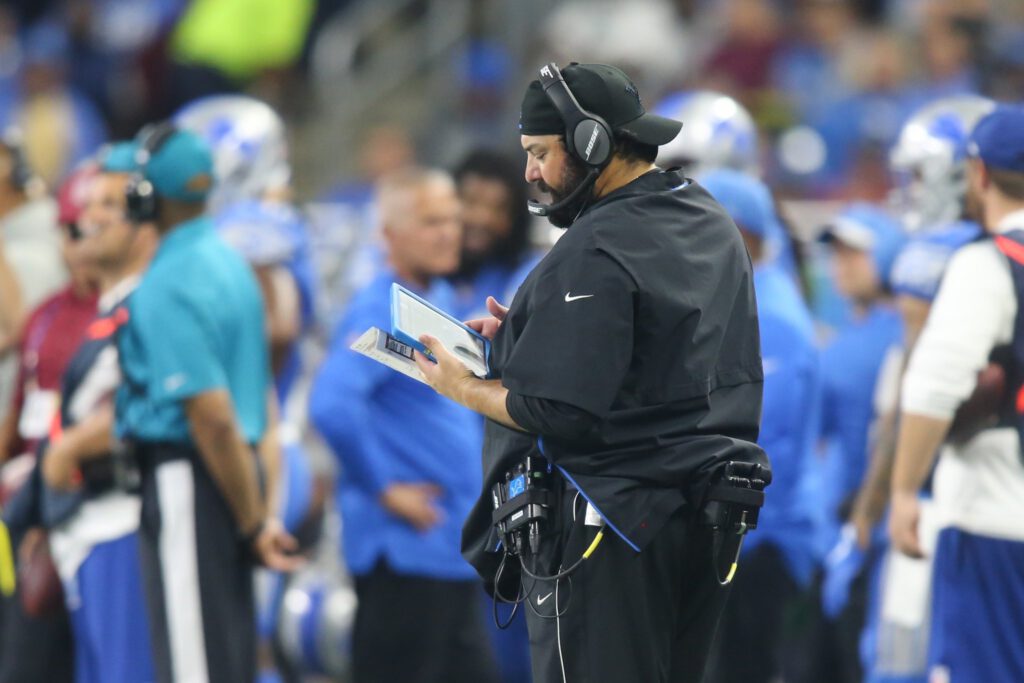 FOXBORO — As the Patriots prepare for old friend Matt Patricia and the Detroit Lions, the Lions defense should look familiar to Tom Brady and company when they turn on the tape.

Although there are some new wrinkles, it appears that Patricia brought the Patriots defensive playbook with him to The Motor City.

The Patricia Lions have predominantly featured a single-high safety look with either bump-and-run man coverage or cover-3 zone in the secondary. Sound familiar?

(man cover-1 “rat” scheme – single-high safety, robber in the middle of the field)

Through the first two games of the season, the Lions ran either cover-1 or cover-3 in their secondary on 73 percent of their opponents passing plays, meaning there was one single-high safety at the backend of the coverage.

In New England, the Patriots ran a single-high coverage 62 percent of the time through the first two weeks of the season, according to Pro Football Focus.

There are a few differences, such as the Lions’ willingness to go with a split-safety coverage (cover-2) on 13 percent of their snaps on defense. The Patriots hardly ever play straight cover-2 only lining up in that coverage on one percent of opponents passing plays this season.

But even Patriots head coach Bill Belichick couldn’t deny the similarities between the two defenses.

“Yeah, there are similarities,” Belichick said.

Belichick noted that the sample size is much smaller for Patricia in Detroit than it was during his six seasons as the Patriots’ defensive coordinator, and as a result, Patricia hasn’t put on tape all of the things that he did in New England.

However, the coach is fully aware that Patricia could pull out more of his old team’s tricks on Sunday, “does he have those things? Yeah. Is he capable of doing them? Yes. Have they all been done? Not to this point,” said the Pats coach.

The question is will the familiarity with Patricia’s defense, a scheme that the Patriots offense goes against in practice every day, help them on Sunday?

Rob Gronkowski doesn’t think so as the Pats tight end said you can’t bank on the opponent doing the same thing every week.

“You just never know what you’re going to get,” the tight end said.

“You never know the game plan. You have to prepare for everything. It doesn’t matter what you see if you know what’s coming — it doesn’t matter unless you go out there and execute.”

The Patriot players might be downplaying the impact of their familiarity with Patricia’s coverage schemes, but the tape suggests they’ll be looking in the mirror at a defensive philosophy that they’ve faced many a time on the practice fields behind Gillette Stadium.

Although execution will ultimately decide the final score, the new Lions head coach would have to completely change his philosophy over the last six-plus seasons to take the Patriots by surprise on Sunday night.

And it’s not just the fact that the Patriots understand Patricia’s tendencies, after all, with the amount of game planning the Patriots do they know just about every opponent’s go-to schemes.

The advantage for the Patriots offense this week will be hundreds and hundreds of reps against a similar defense at practice every day.

But as Gronk put it, that all means nothing if Tom Brady and company don’t execute at a high-level.