Blake Griffin starts once every week or two when Al Horford sits during back-to-backs. The injection of energy and time that allows him to ramp-up gives the Celtics a unique boost. 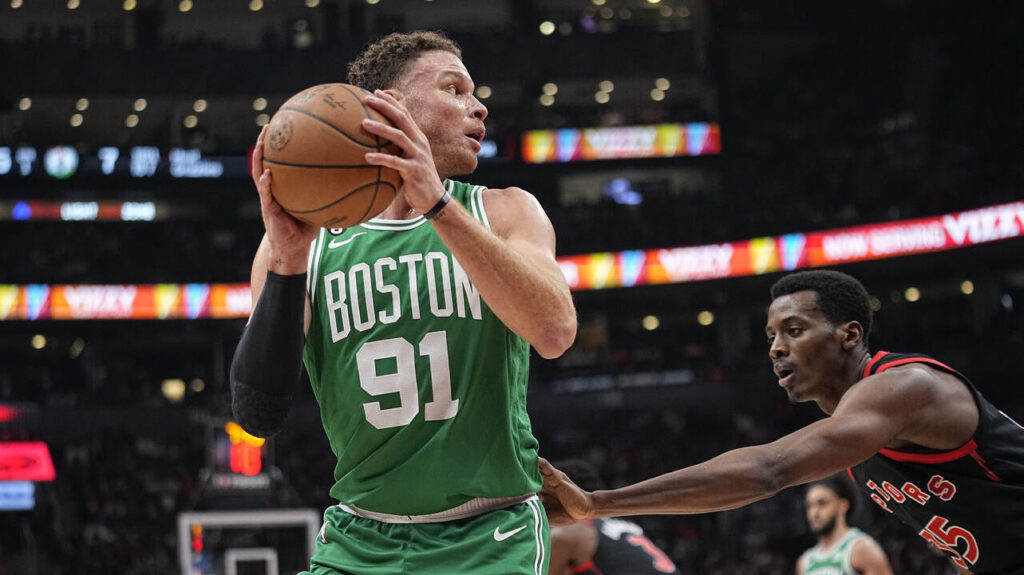 Blake Griffin bounces between different rooms in anticipation of game night. He sits on the trainer’s table in the morning at shootaround. He bounces between the locker room to the hallway and court, and about every room in-between filled with sport science staff preparing him to play. But Griffin knows he probably won’t.

“It’s a lot,” Griffin said plainly on his process. “It took me a couple weeks, it took me probably more than a couple of weeks to get my legs underneath me here. It’s honestly a credit to this training staff and strength-and-conditioning staff. They do a great job of putting together a good plan, you’re not trying to accomplish everything in one day, but you kind of chip away at it, and I’ve felt better and better almost each week that I’ve been here. It’s a lot, it’s that, it’s stuff at home, it’s how you eat, how you sleep, it’s how you go about your whole life.”

The Celtics signed Griffin to allow him to compete for a role in their thin front court after Robert Williams III’s September knee surgery and Luke Kornet’s training camp ankle injury. He struggled in the preseason physically and fell behind camp invite Noah Vonleh, and Griffin’s role transformed into staying ready. Then, after averaging 8.7 minutes through four appearances and sitting through four other games, Joe Mazzulla started Griffin while Al Horford sat on a back-to-back against the Knicks. He scored seven points in 15 minutes, the Celtics won and broke their three-point record with 27 makes.

Griffin started three games since, all wins, the latest a 13-point effort on 5-of-6 shooting against the Raptors on Monday. Boston doesn’t play Griffin anymore outside of his new role. When Horford’s nights off on back-to-backs arrive, next up on Tuesday against the Lakers in LA, he knows it’s his time to shine. The dates are already circled.

“Big shoutout to Blake,” Marcus Smart said. “I know I didn’t, I’m sure everybody here and in the world  probably didn’t know Blake had something in the tank. So to be able to see him come out and give the energy that he’s been giving, that’s all you can ask for. It’s no wonder why everybody loves Blake, it’s no wonder why he’s on this team and he’s still here in this league. He understands what it takes to be a vet. He understands what it takes to be ready at any given moment. Al was out tonight, and he had to step back into the starting lineup.”

The setup is a perfect storm for Griffin, once a high-flying MVP candidate betrayed by multiple knee scopes following his trade from the Clippers to the Pistons during the 2017-18 season. Detroit waived him in 2021 and he joined the Nets in a regular role that wore on him after a hot start. Steve Nash reportedly lost trust in his shooting into the 2021-22 season, and he lost a role on the team completely, leaving him guessing when he’d play and for how long. Brooklyn sat him for Game 1 and 2 against Boston, then reactivated him late for Game 3 and 4.

That’s no longer the case after a similar start with the Celtics. Griffin now knows when he’ll start and when he’ll sit, Horford, Kornet and Grant Williams’ presences making it so Boston doesn’t need to rely on him. He can recover, ramp up and play completely fresh in a role that suits him every week or two. Griffin plays like a pinch hitter, a position that feels unprecedented in the NBA, but has become one of its most fun stories this season.

“He gives us exactly what is expected. We have a lot of depth and the NBA season is very long,” Joe Mazzulla said last week. “He can give us a lot. He’s really physical, he screens well, his ability to crash the offensive glass and his defensive communication is really good for the system that we have. I think it’s just a matter of him and I constantly communicating, him staying ready through his work ethic. There’s going to be moments where we’re going to need him, and we’ve shown that to this point for him and our bench as well, and our depth.”

Mazzulla insinuated Griffin’s professional early in the season played into the development of his role. He leveraged his strong relationship with Payton Pritchard to keep the guard engaged when he lost his regular role, before Smart and Malcolm Brogdon’s injuries opened minutes he stayed prepared for. Griffin told CLNS Media he built a habit of telling each teammate something before every game, and he’s constantly audible and present around teammates in the locker room, huddle and he scrimmages with some of the players lower on the roster like Pritchard, Vonleh, Justin Jackson and others who don’t play regularly.

Griffin can take some credit for all of those players, including Sam Hauser and Kornet, contributing when they’ve been called on this season. He followed his own mantra, and after throwing down two dunks that shook TD Garden against the Hornets last week, Griffin shared a quick conversation with Horford along the sideline and started on Tuesday. His rebounding counteracted the Raptors hard-crashing offense. His passing and occasional shooting flashes make him a worthy fill-in for Horford stylistically.

And his tip-in of Jayson Tatum’s late miss halted a Toronto rally form down 12 points to within five in the final minute. Once again, he soared for a slam.

“I figure if I dunk once a game people will stop acting like it’s a miracle,” Griffin said.