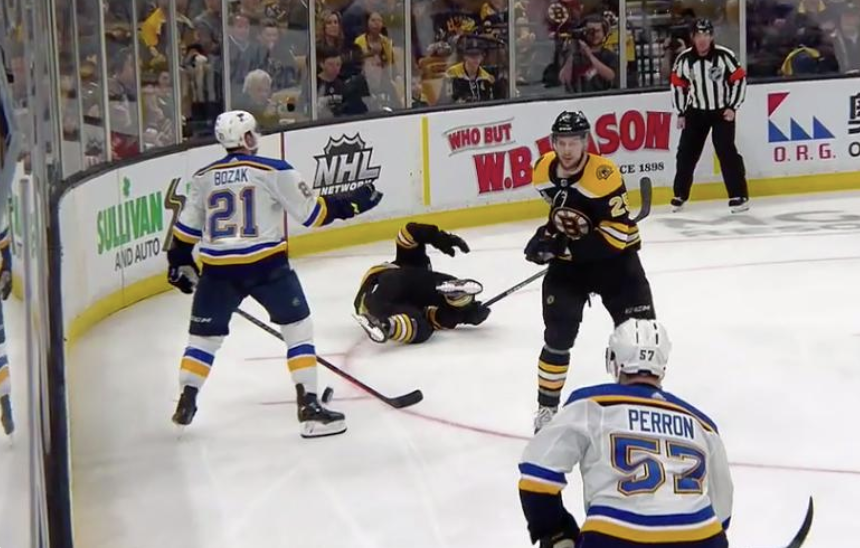 BOSTON — Anyone who saw Thursday night’s Stanley Cup Game 5 at TD Garden knows the Bruins were on the wrong end of one of the worst officiated games in recent Cup memory.

It was bad on so many levels.

There were two more head shots on Bruins players in the first two periods, including Torey Krug. There was a hold on Krug late in the second period as David Krejci slid across to save what would’ve been a second Blues goal and keep it a 1-0 St. Louis lead heading into the third period.

And then, with 9:45 left in the third period, Tyler Bozak clearly slew-footed Noel Acciari, taking out his left skate and dropping him to the ice as the Blues kept possession of the puck, eventually winding up with David Perron putting one through the legs of Tuukka Rask for a 2-0 lead.

That would prove to be the game-winning goal and set off a furious reaction not just from the Bruins fans who littered the ice with debris but many of the Bruins after the game, led by coach Bruce Cassidy.

“Well those are the hits they want to get out of the game, correct?” Cassidy asked rhetorically regarding the head-hunting shots on Joakim Nordstrom and Torey Krug. “Those are the hits that I hear a lot about, clearly they missed a couple tonight. It’s a fast game. I sat here two days ago or whatever it was and said I believe these officials are at this level because they earned the right to be here and you should be getting the best. The narrative changed after Game 3, there was a complaint or whatever put forth by the opposition and it just seemed to change everything.”

The non-call Thursday night was as bad as the non-pass interference call against the Rams’ Nickell Robey-Coleman on Saints receiver Tommylee Lewis in the NFC Championship that sent LA to the Super Bowl, where they were beaten by Tom Brady and the Patriots in Super Bowl LIII. At least the Bruins season did not end because of that egregious non-call Thursday night.

After Game 3, a 7-2 Bruins butt-whipping in St. Louis, Blues coach Craig Berube wondered aloud why the officials were calling so many penalties on his team when they were the least penalized team in the NHL coming into the postseason.

“The non-call on Acciari, their player is on his way to the box, it’s right in front of the official, it’s a slew foot,” Cassidy continued. “Our guy is gone. The spotter took him out of the game for a possible concussion. I mean it’s blatant and a big effect on the game. I mean this has happened and I’m a fan of the game, this is the National Hockey League and they’re getting a black eye with their officiating in the playoffs and here’s another one that is going to be talked about. I thought it was a great hockey game. That call probably, and there’s time, but it really made it difficult for us to get the win tonight. So I’m disappointed. So I guess to answer your original question, it was egregious. But we’re moving on and getting ready for Game 6.”

Therein lies the key to everything. The Bruins are allowed to sulk for 2-3 hours after a 2-1 Game 5 loss that has them on the brink of elimination and the Blues one win on home ice from raising the Cup for the first time in franchise history.

Even Jake DeBrusk, the only goal-scorer the Bruins had Thursday night admitted as much after the loss.

“They did enough to win,” DeBrusk said. “It wasn’t just because of that certain play or certain non-call. But the fans sure let them know. Puts us in a 2-0 hole but there were 10 minutes left so our attitude was we’re over that. I thought we weren’t as urgent as we needed to be at times. We found it a little bit at the end but obviously, it wasn’t good enough.”

The Bruins have shown the ability to overcome adversity before, starting in Round 1 when they lost Game 5 at home to Toronto and faced elimination in Game 6 in Toronto. The Leafs even scored the first goal in Game 6 and the crowd could sense a series clincher. But the Bruins responded less than two minutes later on a goal from Brad Marchand. Before the first period was over the Bruins led, 2-1. They would hold on for a 4-2 win, setting the stage for a 5-1 romp in Game 7. The Bruins closed out the Blue Jackets and Hurricanes on the road. Boston is 7-3 in 10 previous road games this playoff season.

“Anytime you face adversity and overcome it, it does help,” DeBrusk told me. “And we’ve been here before.”

The Bruins have the best goalie in the series in Tuukka Rask, whose numbers are still the best of any goalie in NHL history on the road in the playoffs. The Bruins also have the toughest player in the series – and arguably in team sports – in captain Zdeno Chara. The Bruins veteran received a rousing ovation during introductions Thursday and then went out and played a full game with a visor covering his fractured jaw.

“I think it’s pretty special, even the crowd at the start of the game, how loud it got in here,” DeBrusk said of Chara. “And obviously he’s playing through something pretty major, so you know to put in a gutsy effort like that it’s a morale boost, but at the same we didn’t win so it’s one of those things you wanna do it for a guy but saying that they got the result.”

The Bruins could’ve avoided the misery Thursday night if they had capitalized on two or three of the 10 rebounds that Jordan Binnington left out in front of him. Or if they didn’t lose steam in the second period, or if they had scored on any one of their three power plays.

But all anyone really wanted to talk about postgame was Noel Acciari getting tripped up, leading to a St. Louis goal that was the difference.

“I get it. It’s a missed call,” Acciari said. “It’s the biggest stage of hockey right now. I don’t know what else I can say about it. “Yeah. I know everyone will be ready for Game 6. Everyone is fired up. That’s the thing about this team. We never give up, so it will be a good Game 6.”

The Bruins season hinges on it.